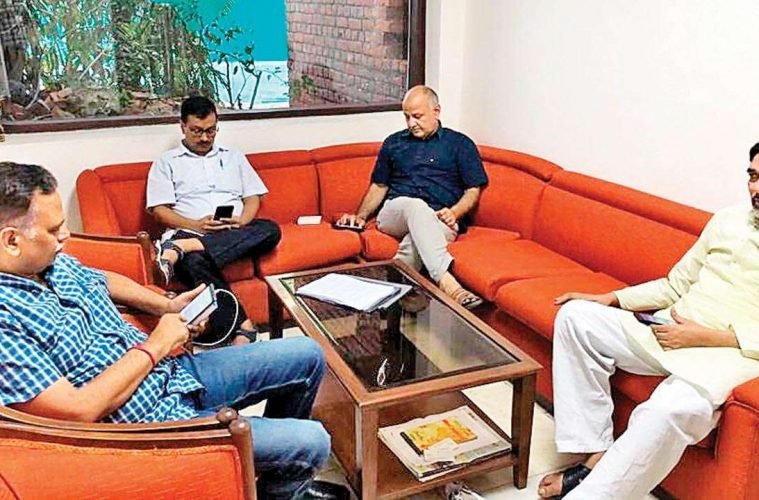 The people of Delhi have seen more drama than a typical saas-bahu show during the last four years. Ever since Mr. Kejriwal decided to contest elections, it has been one odd ride for the people. While Arvind Kejriwal’s claim to fame became dharna politics, it appears that he is still not over his theatrics. In one of the most bizarre incidents of that time, Arvind Kejriwal sat on a dharna while he himself is the CM. The art of dharna may have changed over the years, but the ‘Dharna-In-Chief’ continues to remain the master of the art.

The Heart of the Matter

Delhi Chief Minister Arvind Kejriwal is on a sit-in protest along with three of his ministers at the Lieutenant Governor’s office. Kejriwal is protesting against an alleged strike by the IAS officers in Delhi. The IAS officers’ strike is in protest against alleged assault of Delhi Chief Secretary Anshu Prakash at the hands of two AAP MLAs in presence of Kejriwal. The Chief Secretary is the senior-most position in the civil services of any state or union territory.

AAP government has already been at logger-heads with previous Lieutenant Governor. However, interestingly, the present dharna is one with seating in an air-conditioned room. And it is on a sofa. While many called this an air-conditioned protest, Arvind Kejriwal stated that it was very difficult to sit on a sofa. In response to Mr Kejriwal’s accusations, the IAS officers held a press conference and stated that they were not on strike. The IAS officers claimed that they were being used in the political game which was unconstitutional. They added that Kejriwal needs to change his attitude.

In the last two days, I have been late for every damn meeting because @ArvindKejriwal and his band of buffoons rather do dharna than actually govern. Dear Delhi, I can’t believe you elected this moron

The Art of Dharna

Ever since Kejriwal came to power in Delhi, his government has blamed everyone under the sun for not allowing them to perform their duties. Kejriwal has blamed Modi and the LG for not giving them autonomy and interfering in the working of the elected government. Apparently Mr Kejriwal was not aware of the constitutional make-up of New Delhi before he contested the elections. He did not know that he will have to work in tandem with others to execute his policy. Kejriwal also did not know that he would not be, as many have called him on social media, “Malik of Delhi.”

3 poor people of Delhi are died in last 3 days due to water crisis but Dilli ka Malik is doing High Profile Dharna in AC room to satisfy his ego than solving problem. Such an inhuman scum!

Kejriwal has received support from the “Third-Front” parties minus the Congress. However, Delhi High Court questioned AAP and observed that Lieutenant Governor’s office was not a place to protest. It is the first time ever that all the institutional bodies are being targeted by the opposition parties to further their own agenda. They seem to also convey that “Constitution was in danger.”  Meanwhile, one should not be surprised if Kejriwal claims that Delhi High Court is working at the behest of BJP. While the dharna politics in Delhi is far from over, the common people of the capital are suffering from several problems.

New Delhi is suffering from acute water shortages. Areas such as Sangan Vihar, Devli, Neb Sarai, Okhla, and Khanpur, are the worst hit. Delhi may also be facing a severe electricity crisis as the coal stocks are running very low. As one would expect, the blame has been put on Indian Railways for not transporting the coal. The air-quality in Delhi has been a concern since some time now. It still remains a serious problem. Kejriwal did the odd-even drama for a short span, but no concrete steps were taken to improve the situation. As of writing, the pollution level in Delhi was down to ‘moderate to poor’ from ‘severe plus’ category.

So, the citizen of Delhi have problems in getting water. The power crisis may worsen in future. Anyway the air quality is leading to respiratory disorders. What is the elected CM of Delhi doing? Sadly, doing what he does best, Dharna!