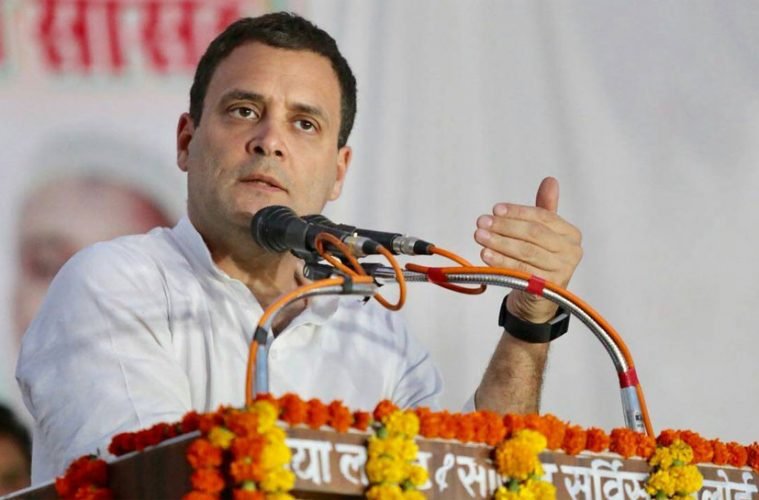 Rahul Gandhi Blames BJP And RSS For Deaths In Sterlite Protest, Playing Politics Over The Dead

An already tense situation in Tuticorin further worsened as one more person was killed in the police firing. This brought the total toll of deaths to 12. At the height of such an unfortunate incident, Congress President Rahul Gandhi chose politics over humanity. The “selective” speaker who talks only on some issues and ignores the rest put out a Tweet in Tamil.

The tweet said that “Tamilians were being Murdered” because they had rejected RSS’ agenda. He further tried inciting the people by saying that people of Tamil Nadu cannot be suppressed. Let that sink in. The leader of the ‘largest’ opposition party puts out a tweet trying to provoke people for his petty political gains. Will he take responsibility if there are more deaths?

It is bizarre that he is blaming RSS and BJP for the deaths of innocent civilians. Does the PM aspirant even know how the system functions in India? Primarily, Tamil Nadu has AIDMK Government and not BJP. Secondly, the police are subject to state machinery and law & order; the central government has no role to play in it.

It appears that Rahul Gandhi has a single point agenda – blame BJP and RSS for everything under the sun. While it is understandable that the role of the opposition is to criticise the Government, but doesn’t Mr Gandhi know about constructive criticism? Rather than showing an better way to do things, he ends up blaming the RSS ideology.

No Indian can forget that not so long ago, India was painted as an ‘intolerant nation’ by a few for their own selfish gains. With 2019 approaching, the strategy seems to paint a narrative that RSS is some demon organisation that is doing everything in the country; including covertly running the Government. Even if that is what Rahul Gandhi is pointing at, can we at least spare the dead?

Sterlite Cooper is a Vedanta group company at Thoothukudi in Tuticorin district of Tamil Nadu. The locals have been protesting against the Cooper plant as according to them it was polluting the area. The protests have been on for months, but the situation got out of hand earlier this week when a crowd of 20,000 people ‘gheraoed’ the District Collector’s office.

The police had to resort to lathi-charge and tear gas to disperse the crowd. However, it is not yet clear as to why the police carried AK-47s at the site and what was the need to open fire on protesters. The state government has ordered an inquiry headed by a retired judge of the Madras High Court. Even the plant is non-operational since the past two months as the Tamil Nadu Pollution Control Board refused to renew its consent to operate (CTO) the unit.

Meanwhile, even though the Pollution Board denied permission, Sterlite had procured authorisation to construct a second unit.

Hearing a petition filed by environmental activist Fathima Babu, the high court has stayed the expansion of the copper smelter plan. The High Court also directed the government to submit a report within four months after holding a public meeting and inviting public opinion on the expansion plans.

However, the politics over the dead has already begun with Rahul Gandhi leading the pack. DMK acting President MK Stalin has raised suspicion over the orders given to police. The CPI (M) said that the ‘brutality’ of the state police was revealed. Actor Prakash Raj has raised one pertinent question in midst of all this: as to why no one took notice of the protest. But that question was soon lost and the center was dragged into it, again.

While every politician is eager to get some eyeballs now, the real question remains where was everyone for the past three months?

The gunning down by the police of 9 people in the #SterliteProtest in Tamil Nadu, is a brutal example of state sponsored terrorism. These citizens were murdered for protesting against injustice. My thoughts & prayers are with the families of these martyrs and the injured.