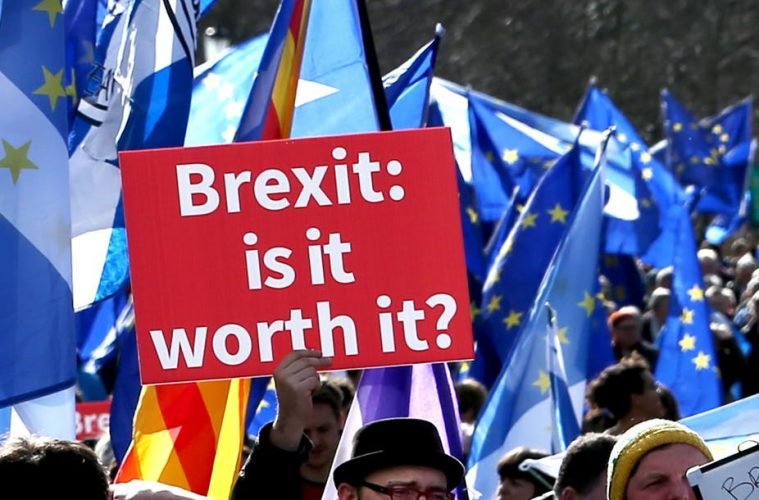 For the global world order, 2016 was cataclysmic. Britain exiting the EU, rise of populism and election of Donald Trump. It was a nightmare year for the the world. In 2018, however, Trump’s antics are mainly creating ripples in the home-front. But the ramifications of Brexit are far more telling than a man-child being elected to the White House. Meanwhile, one of the major economies of the Eurozone, Britain had a history of issues with the continent. One of the few countries in the European Union that maintained its own currency, Britain still suffers from an identity crisis.

Unable to shake off it’s colonial hangover, its difficult for certain section of British society to accept integration with mainland Europe or even the vaunted Irish. This chauvinistic attitude was responsible for the vitriolic movement by the far right UK Independence party led by its buffon-in-chief Nigel Farrage. Although, it was widely expected that the No vote will prevail and sanity will be restored. In an absolute snafu move, the UK voted yes.

The British band Coldplay wrote a song once, called ‘Fix You’. But as the results sank in the collective psyche of an extremely morbid and decaying nation, any amount of ‘tears streaming down your face’ would not fix what happened. Except, instantly, the saner voices called for re-referendum.

Arguably, learning directly from Chamberlain, the new UK PM Theresa May completely ruled out the same. Sensing the weather turning towards the side of the bigots and populists, she jumped on the bandwagon. Two years on, a re-referendum is not a bad idea.

The deal to exit EU has not yet been finalised. What may be left of the strength of the British economy might break within a year of exiting the EU. There doesn’t seem to much chance of the Britons negotiating a free trade deal and zone with the EU post-Brexit. The Europeans will come for them with vengeance. Already in fragile state after the epic economic meltdown in Greece.

Brexit caused ripples not seen in the Eurozone since the le dictateour, Charles DeGaulle blocked Britain’s entry into the Common market. There were clamours of dissent from Spain to the new post-soviet Eastern European members. Brexit nearly caused a cascade effect. European Union did not sit idle. They made sure that the tommys knew exactly how they will be treated by making the negotiations painstakingly slow.

How did we come to this we may ask. Two answers. Fear mongering and blatant lies on one hand and complacency on the other hand. The far-right nut-jobs used every blatant lies they could gather to launch a blitzkrieg of false narrative. There were big buses stating 400 million pounds were being taken out from the National Health Services and being diverted to Europe. Regulations on everything is destroying local businesses.

The islamophobes and bigots joined in stating that EU plans to send hundreds of thousands of Syrian refugees into the UK. Enough to create 5 more Birminghams apparently, The false narrative was barely countered by the then PM, David Cameron. A proper posh, detached from the political realities of the country he ruled, he spent more time in pleading for Scotland to stay than this overriding issue. The irony in all this is that there is a strong chance that in an event of a fresh referendum, overwhelmingly pro-EU Scotland may very well secede from the Union.

The EU and the British government has agreed that a transition period will start from mid of 2019. After this it’ll become a no-go deal till 2020 when Britain officially leaved the EU. The negotiations are still on. But it seems highly unlikely that Britain can salvage much, even in terms of self-respect and the vaunted independence that drove it down the white cliffs of Dover.

Meanwhile bigotry and open racism against immigrants and refugees is on the rise. Brexit, instead of becoming the symbol for British ‘freedom’, brought out the bigots out of the closet. Mainland workers and even no-EU world force, all are being targeted systematically. Muslims top this list and they are the softest and the most visible target for this hate. The situation for British citizens is not very good either. A large population of elderly British pensioners and even young professionals settled in North of France and in Southern Spain. They may very well find their stay considerably difficult within the Eurozone. Not to mentions business in Billions which will be pulled out from Britain, practically ruining the British economy.

I do not think that this is the Britain anyone wants or has been duped to believe that they want.

Another issue that is creeping up lately is the interference of third countries in this conundrum. Just recently, pro-Brexit think tanks proposed controversial proposals. The most incredulous of them being, opening up NHS to external competition, inn order to, ‘competitively improve health standards in the UK’.

The running joke here is that pro-Brexiters are out to destroy the very NHS they wished to protect from the evil Europeans. They also proposed free passage of workers between the US and UK. Not professionals, industrial workers. Effectively flooding UK markets with the costlier American workers. This will effectively bankrupt the UK, very well placing UK in a position of economic dependence on the US.

The re-referendum is necessary. In order to channelize the collectively remaining sanity in the UK, yes its is. For UK to prosper, to stay above the channel water, it needs to stay in the Eurozone it itself helped to setup and regulate. Yes there are issues. But there is nothing a brisk session of negotiations in Brussels cannot solve.