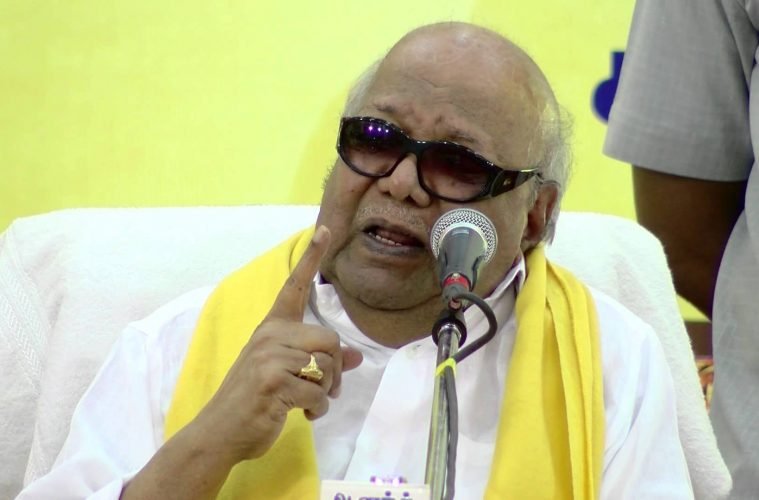 At a ripe age of 94, Muthuvel Karunanidhi, one of the stalwarts of Indian politics breathed his last at a private hospital in Chennai, today. With his passing away, South India, and in particular Tamil Nadu, has lost perhaps the last leader who had massive mass connect and following at the same time.

The founder of Dravida Munnetra Kazhagam, Karunanidhi was the chief minister of Tamil Nadu for five terms. A Tamil poet by passion, he was an astute leader. He successfully managed to build a political empire after having parted ways with M.G. Ramachandran. It is a testimony of his ability to connect with masses that he never lost any election in a political career spanning over sixty years.

Kalaignar, as he was fondly known, was born to a scholar father and homemaker mother on June 3, 1924. In a state which is both famous and infamous for its larger than life living and taking its Gods very seriously, Karunanidhi was openly atheist. As a chief minister, Karunanidhi’s tenure saw reforms which were ground-breaking and ahead of their times.

The life and times of Karunanidhi were never without interest. His first brush with politics was when, as an activist for the Justice Party, he protested against the renaming of Kallakudy to Dalmiapuram.

The poet-politician’s words clicked with the masses. In mere four years, he was elected to the Kulithalai constituency. The first win was an announcement of arrival of sorts by Karunanidhi. He would go on to rule the political scenario of the state for the next 60 years.

And like every movie, his political life was not dereft of drama either. Having started as an activist, he later joined MGR in his political party. Karunanidhi was shown the door by his own leader when he rebelled against Jayalalithaa, MGR’s favourite prodigee.

That, however, did not deter him. He broke away from the main political faction and founded DMK. He remained its president till his passing away, today.

Karunanidhi brought many changes to the way politics was practised in his home state. One of this was pre-poll promises of color television and heavily subsidised rice to all voters. This idea, though extremely devious in its nature, clicked and has stamped its presence very firmly. Today, no political party in Tamil Nadu can think of going to elections without announcing pre-poll sops.

Apart from that, Karunanidhi also made sure the national, north-Indian parties took note and paid heed to the demands of South. Along with Jayalalithaa, he played an active role in deciding who would represent Tamilnadu in Lok Sabha and Rajya Sabha. The iconic bespecaled leader ensured that come elections, Tamilnadu got its due.

The passing away of Karunanidhi, this close to that of Jayalalithaa, leaves a gaping void in the politics of the state. Though the fight over legacy and political inheritance of Amma goes on, Karunanidhi made sure there was no right after he was no longer around.

Though he had always tried to take all his children in confidence and avoid bickering, he made sure to let them know that it was his son Stalin who would be the torch-bearer of his legacy and work. Karunanidhi’s habit of taking everyone along also proved to be a thorn for him at times. Very often, he was accused of extreme favouritism for family members and well wishers.

However, with Karunanidhi’s passing away, political scenario in Tamil Nadu will take an interesting turn for sure. There are no clear winners in the battle of legacy in AIADMK or DMK. Those who claim to have an edge are only trying to bluff. They are only trying to establish themselves in the heart and minds of voters. That task is going to be extremely difficult, and unfruitful one at that.

We will witness whether Stalin or Alazghiri will be able to replicate even a tiny fraction of their father’s mass popularity. While Stalin has his late father’s blessings, the other son has a lot of ground support among workers of the party. And both the sons have miniscule support of the other taller national leaders of the party. It is yet a mystery, as to who gets to sit in the seat vacated by Kalaignar.