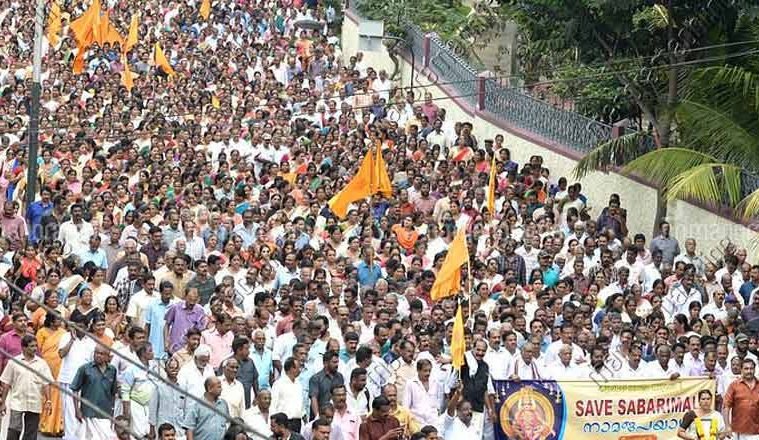 The decision of Honourable Supreme Court to allow women of a certain age to enter the Sabarimala Temple has led to massive protests across the country. The situation in Kerala remains tense. The devotees of Lord Ayyappa are peacefully protesting against the entry which opened today.  The Kerala Chief Minister Pinarayi Vijayan told reporters that nobody would be allowed to take the law into their own hand. Also that his government will act against anyone preventing devotees from entering Sabarimala.

Every year around 3.5 crore devotees visit Sabarimala. A report from News18 states that this number is second only to Mecca. The devotees protesting against the entry have stated several times that the restriction on entry of women has nothing to do with the women. But it is because the Lord Ayyappa in this particular Temple is eternal celibate (Naisthika Brahmachari). There are other Lord Ayyappa temples in Kerala where everyone can visit irrespective of age or gender. The protesting devotees have also stated on various occasions that the restriction on entry has nothing to do with menstruation.

However, the Supreme Court’s verdict and the massive demand for women’s entry into the Sabarimala Temple has been a blessing in disguise for the Hindu community. The massive non-violent and sometimes silent protests showcase that the verdict has united Hindus across the nation. Activists from 30 different organisations are expected to protest at Nilakkal and Pampa. The protests have seen the tribal communities join the protests in large numbers. The Mala Arayan tribal group has set up vigil at 18 hills through which devotees enter the shrine. A few tribal women were even ready to commit suicide if women tried to enter the shrine.

The issue has to an extent awakened the Hindu community. They have realised that if they do not speak up, their culture, religion, and values will be destroyed in the mad pursuit of secularism. The anger among the Hindu community has been brewing on account of their Temples being systematically looted by the government. Major Hindu Temples that generate huge revenues are run by a government-appointed board. These may even have people belonging to other faiths, because again – secularism. At present, only Hindu Temples are under government control. No Mosque or Church have been “acquired” by the government (nor should any religious place be).

While this injustice has been meted out to Hindus for decades, the issue has only caught the eye of common public recently. For a long time, organisations such as The Hindu Dharma Acharya Sabha and activists have filed PILs or sought legal recourse to prevent the systematic loot of Hindu temples. A report in Daily hunt reveals the shocking extent of this loot. It states that in 2014-15, the income from Temples in Karnataka was Rs 31,21,24,946, whereas the amount spent on development of Temples was Rs 68,510. The donation in the Temples goes to government schemes, subsidies, and at times to Churches or Mosques too. This is something that happens not only in Karnataka but across the country.

As one would expect, the governments does not want this arrangement to change. The Temples have become cash cows for them. On the other hand, the Hindu community is facing deprivation of their rights and a great injustice. The Sabarimala Temple case has united all Hindus and this unity could go all the way until all the Temples are freed from the government. We will try and compile a list of major temples that are under the government. Stay tuned to Unbumf for more updates.

On a personal note, I urge everyone to not put money in Hundis of temples acquired by the government. Hit them where it hurts, and stop giving them money. Instead, put a note which reads “Free Our Temples” in the Hundis or donation boxes. You can hand the money to the priest. Or put it in the thalis because most priests at medium and small temples are woefully underpaid.