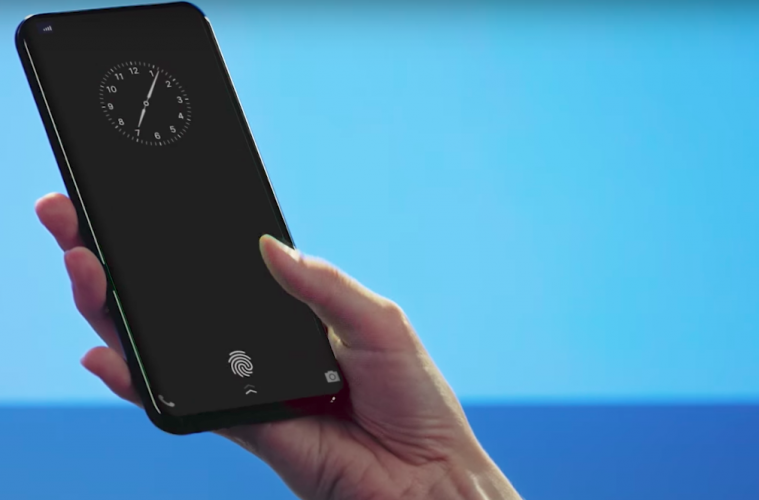 On-Screen Fingerprint technology has been the talk of the town for quite some time now. The technology was an envisioned trend since a few years. However, its first close-to-reality episode was at last year’s Mobile World Congress held in Shanghai. Where Qualcomm demo-ed, the first of its kind, concept on-screen fingerprint scanner. A slow but successful attempt which only served the purpose of a proof of concept. Qualcomm predicted the mass production of this technology for late 2017 or 2018.

Tech Giants working on this technology

Working on this lucrative feature were all the tech giants of the industry. From Apple to Samsung and Qualcomm to Synaptics, all the players were researching the tech and signing collaborative deals to become the first to launch it to consumers. Through major part of 2017, the on-screen fingerprint was believed to be “THE” feature of the upcoming smartphones. With rumors ripe that Apple would launch it in their iPhone upgrade or Samsung would beat them in their Galaxy Note 8. Sadly, even the iPhone X had to be launched without this feature. Though they managed to save pride with their facial recognition technology. Samsung, on the other hand, had to trade off an awkward back-panel placed fingerprint sensor to achieve its bezel-free screen in Note 8. 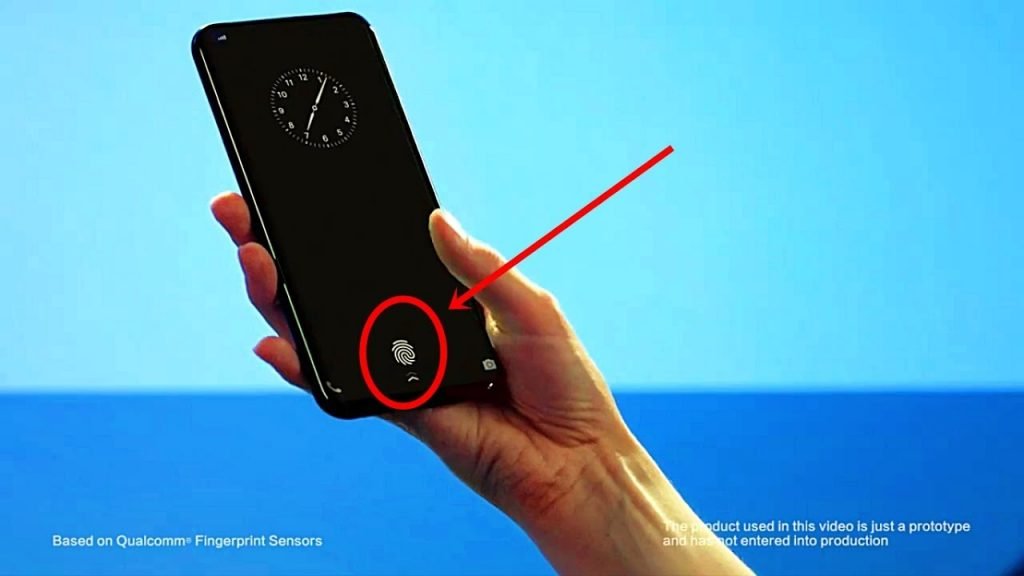 Setback for the Smartphone users

However, the year turned out to be a disappointment for the awaiting smartphone consumers (much like everything else!) Despite Qualcomm’s promising demo and their deal with Vivo, all the tech enthusiasts were set up for a bitter disappointment. The technology could not be perfected enough to be commercialized.

What was so striking about the released Qualcomm demo-video, however, was its uncannily natural feel. Like this is something that should have been existing since the inception of touch screens? But why wasn’t it? Well, there are quite a few challenges to be overcome for achieving this feat. One of which was to develop a technology that could penetrate the thick display and glass cover of our smartphone screens. A technology that can penetrate it, scan or capture our unique fingerprint and still be cost-effective as well as quick. (Cause you know, we need instant gratification in everything)

Come CES 2018, and the hope is rekindled with an all-new vigor! The biggest consumer electronics convention held in the sin-city this year saw the formal launch of this tech. Again, leading the race was an unexpected player. Not Apple. Not Samsung. But the Chinese conglomerate, Vivo. Alongside its partner, Synaptics. Oh yes, Vivo changed ship post the Shanghai demo with Qualcomm. And may I say, rightly so.

Now the big question is, how exactly does on-screen fingerprint recognition work? Fret not, we will lay it down for you.

Synaptics has become the first company to start mass production of its in-display, optical fingerprint sensors titled as the Clear ID. It first revealed its intention of working on this futuristic feature back in December 2016. But somehow, things didn’t pan out. But 2018 seems to be the year of magic. They have perfected their optical sensors and gave out a widely appreciated demonstration at the Vivo Booth at CES. 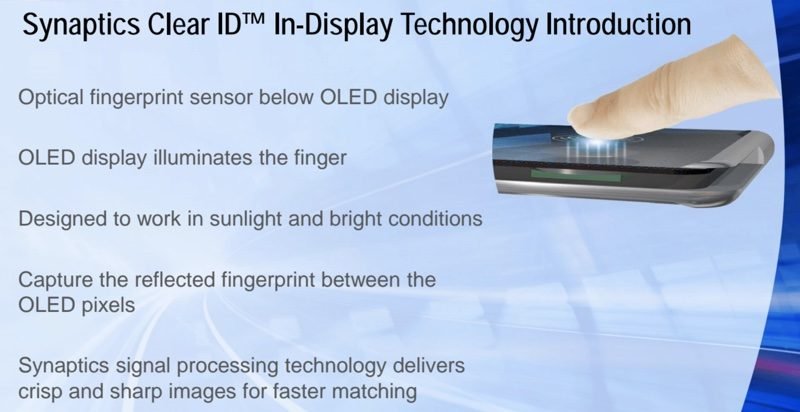 The working of the same is simple. Though it sounds very intuitive, the actual nuances that go into producing something like this are immensely complex. Moreover, the optical sensor works only with OLED screen.

To put it in simple terms, when the fingerprint-specific area of the screen is pressed, the specific area is illuminated. This light is reflected back onto the in-display sensor which maps your unique fingerprint. The sensor peers through the pixels of the OLED screen and captures your unique fingerprint. The gaps between the OLED pixels allow this sensor to work successfully. And this is the reason that LCD screens won’t be able to use the Clear ID sensor (because they need backlighting, which disrupts reflection).

The rest of it is same. Registering the prints and consequent working. While the sensor is slow as compared to the existing fingerprint sensors, yet it is faster than the iPhone face recognition. (As claimed by the company.)

The company has started mass production as well. So gear up, 2018 may just be the year of on-screen authentication! 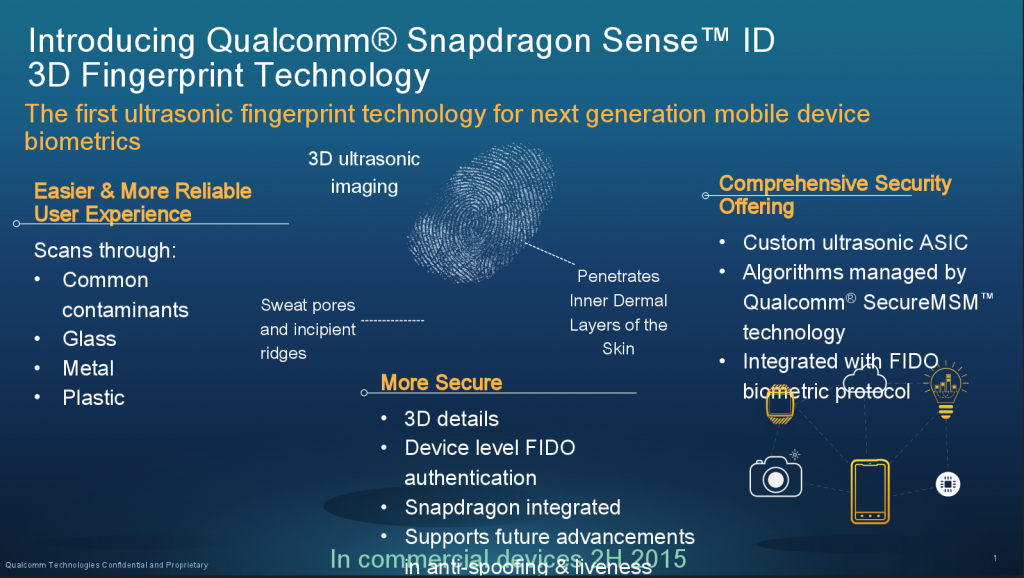 Qualcomm was the first company to demonstrate a proof of concept for onscreen fingerprint tech. While their tech stack was much different from Synaptics, it essentially served the same purpose. The underlying technology is ultrasonic communication. How exactly does an ultrasonic sensor work? Basically, the sensor sends out sound waves at a frequency which are used to calculate the distance from the object that they bounce off of. Something a lot of animals like bats, dolphins, and whales use for communication. Coming back on track, the sensor launched by Qualcomm, in Vivo, was a hit at the MWC except for its authentication speed. Which was noticeably slow, as per reviewers.

While the tech appeared to be promising, some glitches were still to be fixed. Which hasn’t been fixed as of yet I guess? To actually deploy this sensor for commercial use, the same must be mass produced at an affordable price. Which may have been a reason that Qualcomm lost Vivo as well as the race to become the first company to commercialize in-display scanning.

The smart-phone industry is one of the largest in the world right now. And each new feature can be pivotal to a company’s market share.

And thus, the race to be the first at everything. While dominated by Apple and Samsung, Vivo has emerged as a winning player in the race to on-screen fingerprints. Although it is yet to give a name to its model or even declare a commercial price and release date. Let’s wait and see which company is the first to launch a product embedded with this lucrative feature first. Any guesses?