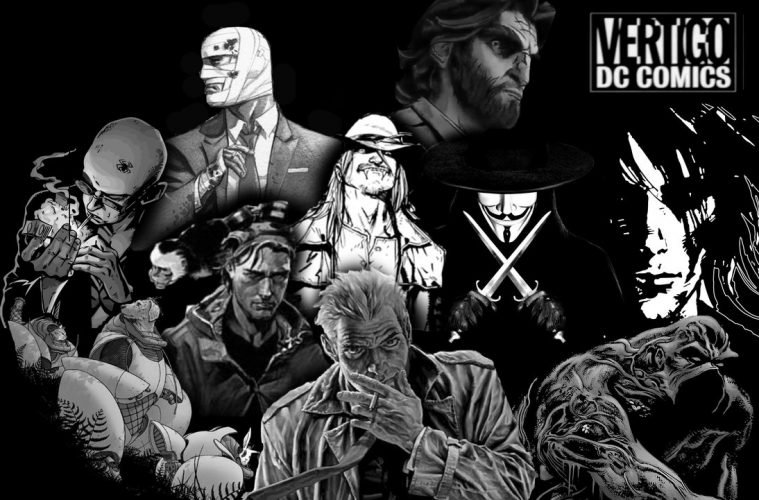 It is interesting to observe why someone would like Vertigo Comics or any adaptations of these comics. They are dark, have references to the devil, depict gore. Moreover, they never shy away from disturbing images and dialogues. These are enough reasons to scare the shit out of anyone. However, these comics sell like hot cakes. This is because these comics satisfy a deep-lying desire inside all of us, to witness the world as it is without the sunshine and rainbows. And it almost always has a very deep moral lesson which is presented in a unique (read: twisted) way.

Vertigo comics are an imprint of the famous DC comics, where they published comic books and graphic novels which were too dark or gruesome for the audience of DC. Lately, a lot of these comic books have been adapted as movies and series, here are some noteworthy mentions.

This is the best fusion of fiction and mythology that I have ever seen. The story follows the journey of Shadow who is released from the prison before his release date to attend his wife’s funeral. On the flight, he meets a gentleman who insists on being called ‘Wednesday’. Wednesday wants to recruit him for a mission. However, he soon finds himself stuck between a gang war.

These gang members have very special supernatural powers which he finds difficult to believe. One of these gangs claims to be the New Gods. On the other hand, Wednesday is at the helm of the rival gang. Wednesday asks Shadow to travel with him while he convinces other individuals to join him on his crusade.

Without spoiling it for you, Wednesday was named after the Norse god Odin, (you would know him as the father of Thor, from the Marvel movie franchise). All the other ‘individuals’ that Wednesday is recruiting are gods from other mythologies who traveled to the United States of America.

One of the Strongest characters in DC comics appeared on the silver screen with Keanu Reaves playing the lead. The movie was a hit amongst horror movie buffs, who found the biblical war of angels and demons being fought in today’s day enthralling. Moreover, the comic was adapted into a series too.

John Constantine is a street-smart magician who condemned his soul to hell when he sent an innocent girl to hell during the latter’s exorcism. He learns sorcery and fights off demons in hope of atoning for his sins.

Imagine an uber cool devil driving a vintage convertible on the streets of Los Angeles. Yeah, hold on to that thought. Moreover, imagine him to be using an English accent, wearing suits and partying like there is no tomorrow.

Say hello to Lucifer MorningStar, the archangel who was condemned to hell by his eldest brother Michael, for questioning the almighty. But what the hell is he doing on Earth you might ask? Well, he got bored of his responsibilities so he ‘quit’. He decided to live on Earth to understand humans better. The series is about how he comes to terms with his purpose in life, cool dialogues, the ‘devil’ may care attitude and Lucifer serving justice to those who had it coming.

Just when I thought I had seen it all, no superhero movie escaped my watchful eyes, I bumped into this massively screwed up show up which I fell in love with. The show is about Jessie Custer, a preacher in Texas who has a dark past. He is hit by an invisible force which fell from the skies. Things start changing from there on, people start complying with his demands.

Isn’t that the best thing that a ‘preacher’ can wish for? Not actually. He befriends a foreigner Cassidy, who is a vampire. Moreover, there are two mysterious men who have been following the trail of the invisible force from space and trace it back to Jessie’s Church.

If you feel you have seen all the possible versions of zombies, give this show a try. Olivia went to a party and contracted the zombie virus. She wakes up the next day to her insatiable hunger for human flesh. And here is the Vertigo comics twist, she chooses to quit her career as a medical resident and works in a morgue. Her career choice serves two purposes, she can utilize her skills and she can feed on the bodies.

Olivia realizes that she has a superpower, she imbibes memories and skills (like weaponry, martial arts, painting skills etc.) from her last meal. Yeah, the person she ate. Moreover, the series follows her on her journey as a part-time consultant to detective Clive solving cases of homicide.