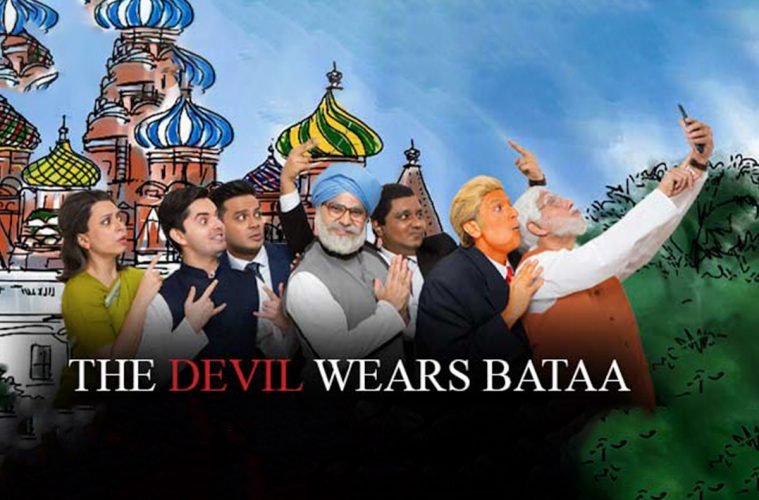 Did you know that the word “politics” is made up of two parts “poly” and “ticks”? This essentially means that politics consists of “poly” meaning many, “ticks” meaning – you know the meaning. I came across this beautiful meaning of this beautiful word at a play called The Devil Wears Bataa. This play filled with laugh riot and politically incorrectness by political characters was put up by Silly Point Productions.

With characters that take cue from the political scenario of India and America, the slapstick presentation gives a glimpse of what goes on behind the complex curtains of politics. Considering politics is complex, it is okay that we do not understand it. But what if even the politicians also do not understand what they are doing? Funny, right?

Well, that is what The Devil Wears Bataa brings forth. There are two parts to this joy ride: The Indian Political scene and The political scene of USA.

Paaji (Manmohan Singh) is in his second term as the PM of the country. But, we are in for a surprise. Paaji is not a silent person by nature. He has been silent for 8 years only in front of the public, because Madamji (Sonia Gandhi), said so. It is here that the play introduces us to an eccentric Punjabi. One who has no filter and can throw witty one liners at the drop of a hat. Even if that means throwing veiled shade at Madamji ka Puppy beta (Rahul Gandhi).

It is at this time that Madamji asks Paaji to train Puppy to be the next PM of the country. But Paaji has a secret agenda of his own. This agenda involves a foreigner and the country’s next level face-lift with schemes that were not supposed to be (demonetisation). Ofcourse, things start falling apart for Paaji and Madamji, but no one shall know the real secret. These troubles do not stop the audience from laughing their heads off, though.

The Political Scene In USA

We all know that money drives the political scene in the US. So, it is not a shocker when we realise that the Presidents may come and go, but Mr. Duck (Donald Trump) is always there behind the scenes. And helping Mr. Duck deciding Presidential candidates after George W. Bush is our very own Mr. Bobby.

Here Bobby comes up with a perfect candidate who will be the one to be the President of the USA. But is this candidate what the American citizens have been used to, till now?

This also shows us that India or America, politics is always straight like jalebi.

Writer and Director Meherzad Patel, truly understands his audience and knows what he wants to deliver to them. The fact that he has picked the best performers for delivering the message is just hitting perfection. The writing, comic timing, joke delivery and direction; all are on-point with this Silly Point Production.