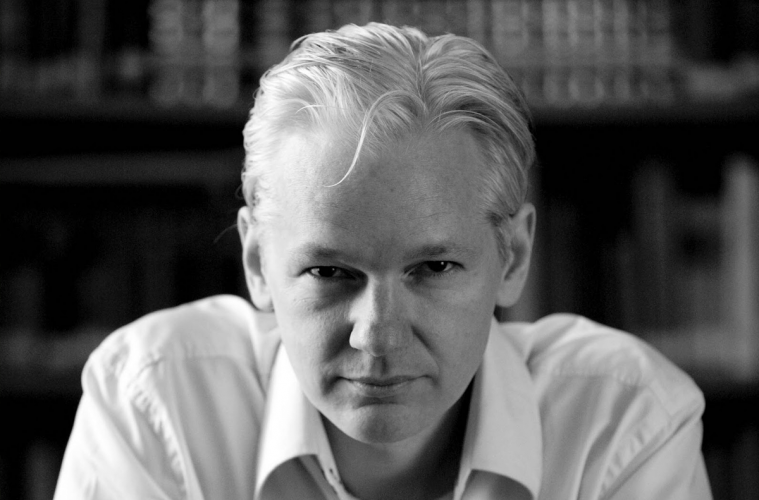 On June 27th this year ten US senators wrote to Vice President Michael Pence requesting him to have a word with Ecuadorian President Lenin Moreno about the country’s stand on Julian Assange’s diplomatic asylum. They requested seeking clarity on the Russian interference in the 2016 US presidential elections. The government of US suspects that Russia partnered with WikiLeaks (an organization founded by Assange),to meddle with US polls. Pence was to have a meeting with Moreno the following day. The White House later announced that the two countries would remain in close coordination and would take potential steps after deliberation.

In June, 2012 Assange had approached Ecuador’s embassy in London seeking asylum on grounds of threat to his human rights. Ecuador confirmed his protection later in the same year, under the presidency of Rafael Correa. Assange got the permission to remain at the embassy for an unspecified time. Assange continues to take refuge at Ecuador’s Knightsbridge, London building to this day. He faces a possibility of extradition to Sweden or to the United States if he ever leaves the premises.

In 2010, following a series of leaks related to the US State Department cables Julian Assange reportedly visited Sweden for a seminar. During his visit he had applied for a residence permit to stay and work in the country. He hoped of creating a base for WikiLeaks owing to its whistleblowers’ protection laws. It was then, that two women had separately filed cases against Assange on allegations of rape and molestation.

The relationships with both women were consensual and charges of rape were dropped after interrogation. These cases later reopened and one of them was eventually dropped since the case had reached its statute of limitation. The investigation involving lesser degree rape was dropped in May, 2017.  The Swedish Prosecution Authority was unable to get any assistance from Ecuador for questioning Assange in the case. However, the same may be reopened at any time before 2020 if Assange leaves the embassy.

The US Extradition Threat

Julian Assange has had a history of involvement in hacking since the 1980s. In 2006 he set up WikiLeaks, an organization aimed at publishing information to bring important news and information to public domain. Sources around the world could submit extracted documents that were hacked, with their identity kept secret.

But in 2010 an American army soldier, Chelsea Manning (then Bradley Manning) accessed and leaked several classified and unclassified material from the army’s database. These extracts of data involving videos on the Collateral Murder, the Afghan and Iraq war logs and US diplomatic cables were later shared with WikiLeaks. 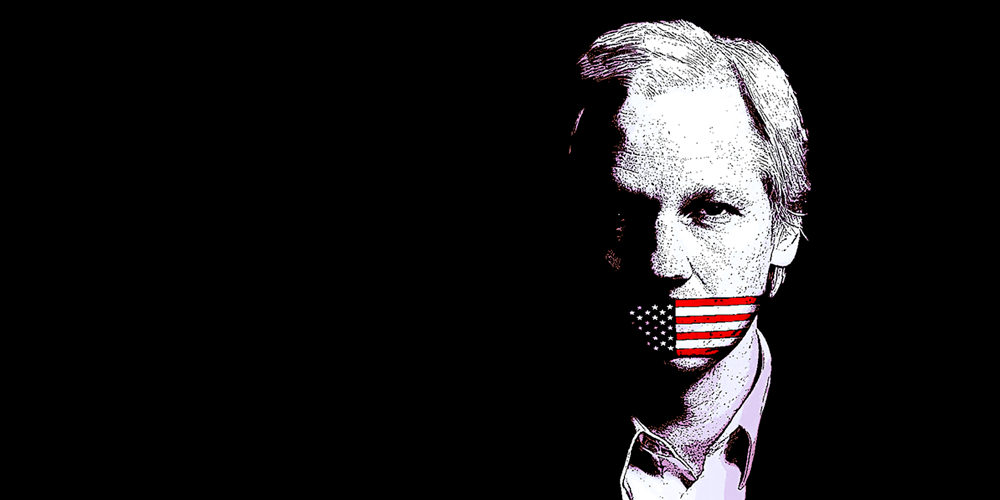 Her identity would have remained confidential, had she herself not disclosed these details to an acquaintance who she barely knew over the internet. It became clear that Manning was battling a gender identity crisis that led her to loneliness. This resulted in her sending a random chat message to Adrian Lamo mentioning details of the leak. She said that this chat was for seeking emotional support from someone and her internet connection was the best way to reach out to that ‘someone’. Lamo, a journalist later approached the US Army’s Criminal Investigation Command with the chat logs.  This got Manning in to further trouble, hence opening an investigation against herself and Assange.

Meanwhile, the Swedish allegations of sexual assault got open against him. An international arrest warrant lead to his detention in the United Kingdom for a total of 560 days. Only post this he received asylum by the Republic of Ecuador at its London embassy.

Why is Ecuador Sheltering Assange?

Rafael Correa, president at the time, confirmed Assange’s request for protection against his extradition to Sweden. Ecuador released an official statement elucidating its reasons for shielding the WikiLeaks founder.

It considered Assange an internationally known and celebrated journalist. He was someone who deserved apparent freedom of speech and expression. He had won several media honours since 2008 which includes a Sydney Peace Foundation Gold Medal in 2011. Assange, in his request, explained that his possible deportation to Sweden could politically result in him being handed over to the US officials. This would be in the 2010 US cable leaks connection. He also faced a hazard under the UK government, who had also considered arresting him from Ecuador’s embassy in London. But that did not happen. It was in violation of the Vienna Convention on Diplomatic Relations between the nations. As per the provisions of the treaty the host country could not enter the embassy premises or conduct a search within it without the permission of the head of the mission. 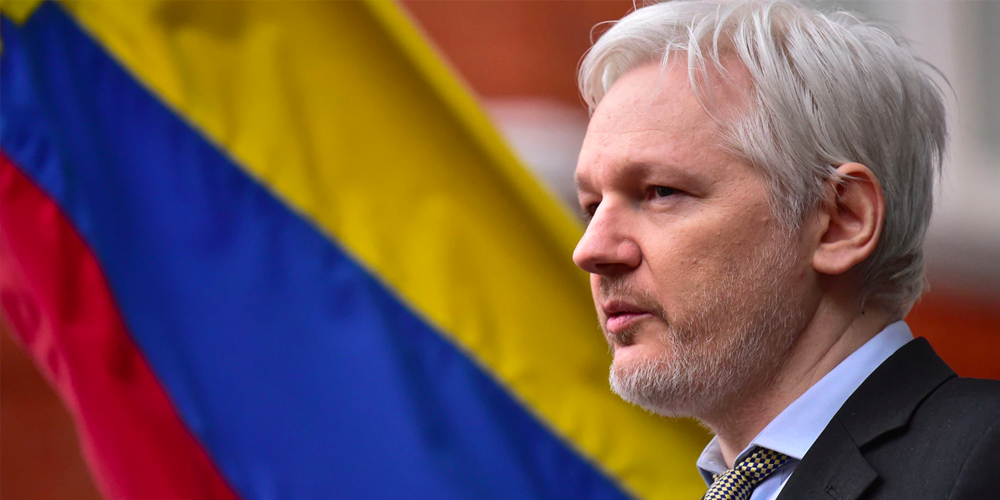 Moreover Ecuador expressed concern over Assange’s human rights and personal safety. By all means, he was equivalent to journalists bringing truth to the forefront. He was a source for their publishing matter too. His extradition could have severe consequences that could also result in a death sentence. However, his actions were a violation of the US laws.

With over 2700 days of detention in total as of today, Assange lives within the four walls of a space within Ecuador’s London embassy. He needs immediate medical attention as he suffers a frozen shoulder and depression due to confinement. Various rallies and vigils conducted by people in parts of the UK and US demand free speech. They also demand drop of the Grand Jury Investigation by the US Government against Assange.

In 2017, Julian agreed to surrender if Chelsea Mannings’ sentence received pardon. She received a 35 year sentence in the WikiLeaks case. President Obama in January 2017 (prior to President Trump assuming office) had commuted her sentence excepting four months of it. Pardoning it in whole would make no sense and hence Assange did not give in.

Currently in an open letter to US President Donald Trump, Assange seeks to put an end to this long running war, requesting a drop in proceedings against him. 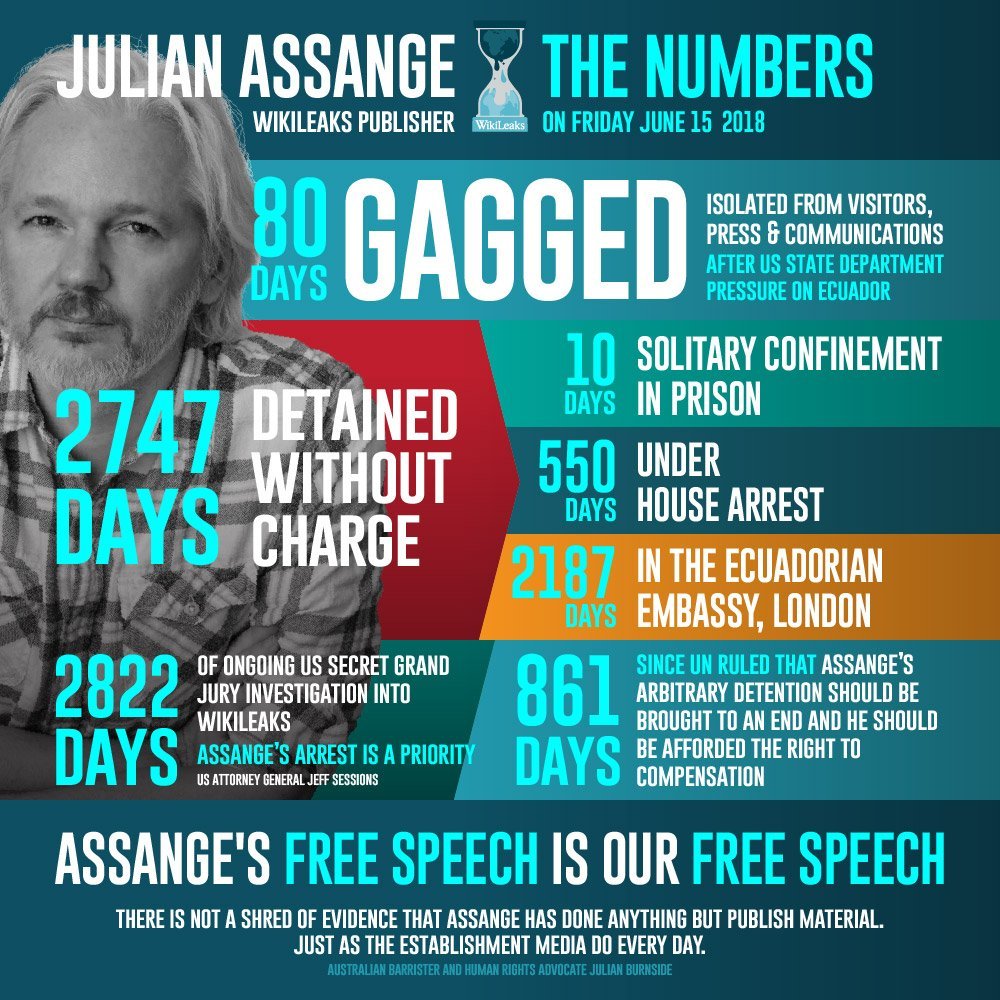 As he turns 47 today, Julian Assange lives solitarily without access to basic healthcare. He describes it as “not even being able to receive any sunlight”. Assange fights for free speech, with only one choice left. He has to leave the embassy and has to stand trial for an offence he did not commit. Free Assange is free press and free speech is what his defenders believe.