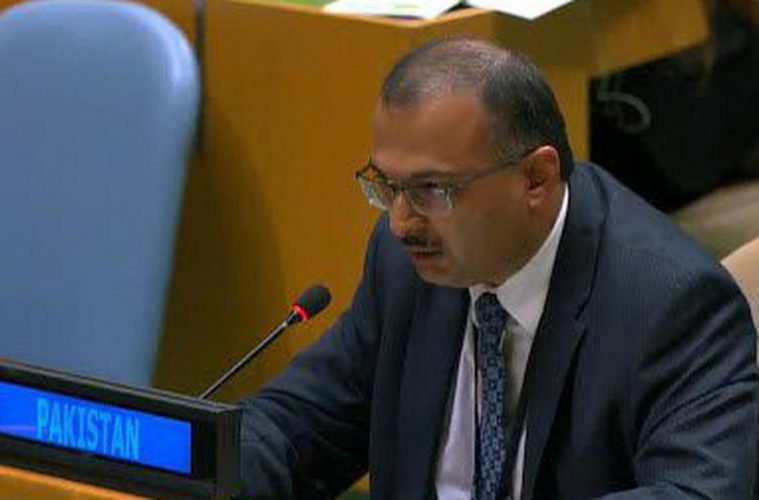 Pakistan and Congress both share one common trait, both have vitriolic hate towards the common man’s Prime Minister Narendra Modi. It is hard to tell whether it is his humble background or his vision of modern India. But both are a harsh critic of PM Modi.

There have been several instances when Congress party leaders have insulted India on foreign soil (Pakistan). Or even urged Pakistan to help Congress remove Modi from the Prime Minister’s office. While one can claim that these statements were made in an individual capacity and rest other claims are mere allegations, the recent statements made by Pakistan at the United Nations General Assembly (UNGA) does reveal some striking similarities.

A day after India’s External Affairs Minister, Sushma Swaraj launched a scathing attack on Pakistan exposing them on the global stage, Saad Warraich, Pakistan’s envoy to UN using the right to reply attacked India. He said that breeding ground for terrorism in the region were RSS centers of fascism. Congress who had coined the term “Hindu-terror” and is often seen bashing the RSS, makes similar claims. Rahul Gandhi leaves no stone unturned to blame RSS for everything under the sun. It was astounding that Pakistan took a cue from Congress. Warraich added that Muslim and Christian minorities were openly facing lynching in India; a claim or rather a narrative set by Congress. Why no one talkes about other minorities such as Sikhs, Jains, or Parsis living in India without any fear is surprising? Or is it?

Saad Warraich also referred to Adityanath as an “unabashed Hindu extremist”. Again something which Congress has said multiple times. The Congress has gone a step ahead multiple times referring to Yogi Adityanath using his real name in a bid to discredit and insult him. Notably, Hindu and even Jain monks give up their worldly names and take up a new name after becoming a Sanyasi.

Pakistani Diplomat further spoke about NRC in Assam. He said that the “right to citizenship to Bengalis in Assam is being arbitrarily rescinded.” Also that there was no space for dissent in present-day India. So, if I were to tell you only the statements and ask you to guess who made them, it would be a tough task for even the most politically aware person to decide between Pakistan or Congress.

Perhaps, it is time for Rahul Gandhi and the Congress party to decide whether the nation comes first for them or scoring political points. The inaccurate statements made by Rahul Gandhi have now been officially used by Pakistan against India. One may not agree with the RSS or its ideology, one doesn’t have to which is the beauty of democracy.

Congress may continue criticising RSS or the Hindu ideology. However, making false claims and branding them a terrorist organisation is doing a great disservice to the nation. Not so long ago, Mr Rahul Gandhi had compared RSS to the Muslim Brotherhood on an international platform. While he or his team may think that anti-RSS position could be good for votes, it is now officially the sentiment against India of Pakistan.

Congress’ stand and statements on NRC and Yogi Adityanath seem to get support from Pakistan. This uncanny similarity in statements made by India’s oldest party and India’s biggest rival raise some serious questions. Does this mean that what Congress is saying is beneficial to Pakistan? Or is Congress saying something that Pakistan can use against India? Whatever be the case, people of the country would appreciate if Rahul Gandhi and Congress stop making statements and claims for petty political gains.