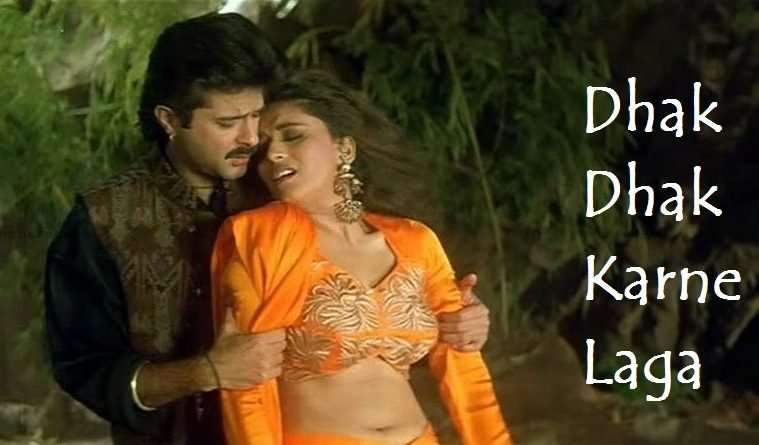 Tharki Songs From The 90s When Bollywood Went Bonkers

We might pretend to be the most sensible and logical humans of this planet on social media, but when it comes to parties, none of us mind dancing on Lagailu Jab Lipistick. Well, Bollywood is infamous for having cheesiest tharki songs. I feel nothing comes close to the 90’s songs which were creepy and cheesy level max.

So, here are few tharki songs of Bollywood from that decade:

1. “In The Night No Control” – Khiladiyon Ka Khiladi

This uber cheesy song in Hinglish has to top the list of cheesiest songs ever. Although this song pretty much makes you cringe, but this is found to be one of the favorites of the species called Couples. Especially when they are drunk. Oh and Annu Malik killed it with his ace music direction.

The song begins with some sexual noises that Anil Kapoor and Juhi Chawla’s playbacks makes while they are on a mattress. Also, the choreography has too much pelvic action which is often seen copied at weddings by the uncles with fat bellies. Too much maal overall to offer, if you ask me.

Was the Censor Board on marijuana those days? The song clearly has Khada Hai as its motif. Even if someone actually did not notice what the singer is actually talking about, the videographer made sure to zoom in on exactly what is “khada”. I do not really understand if the actors involved were fully aware of their choices while they were filming for this song.

Okay, so wedding night songs have always been Bollywood’s favorite. This infamous song by music maestro AR Rehman was quite a hit back then. The song basically depicts the curiosity of old aunties in the family, curious about the newly wedded couple’s first night. Pretty sure we all have such aunties in the family! If there will be a Bollywood remake for Angelina Jolie’s voyeuristic directorial debut, By the Sea, I bet, this will be its title song. Because shaadi k baad kya kya hua, khidki mein se dekh zara.

All my childhood vacation memories have SRK and Govinda starrer movies being watched with my family. Until I was 12, I never realized why I was sent to the kitchen to fetch a glass of water amidst the movie. Well, this song is one of those reasons. But still, whenever it is played in some party, one simply cannot resist shaking his booty on its beats.

This song is a group celebration of pleasure. It begins with din mein leti hai, raat mein leti hai, subha ko leti hai, shaam ko leti hai. But wait wait, later on the protagonist says “naam” leti hai. So that puncture is fixed right there, I guess. Just watch the video and try to copy the dance moves. These dance moves can spice up your party any day. Hashtag Guaranteed Results. Oh the lyrics are super trippy with all the ‘sajans’ and ‘balams’.

So, apparently Mamta Kulkarni in the song apologises for sleeping with her brother-in-law, thinking that he is her husband. Well, one big confusion that looks like! Ekta Kapoor much, maybe? Now, one would be lying if he denies that he has not tried humming this song. I have seen my father doing that! That ‘gupchup-gupchup’ part is catchy.

Grapes have always been Bollywood’s favorite for showing off something tharki. This song is not even subtle. The woman legit rubs it on our face that she is one ‘angoor ka dana’. Well, okay then! This song is like any Dhinchak Pooja’s song. Once you watch it, it keeps on playing inside your head. You just try to divert your mind but you can’t. Amidst very approving nods by Puneet Issar, the song really tunes up to you.

This song is actually a smart way to tell your partner your intentions without anyone actually understanding, initially. The ‘chuha-chuhi’ reference is too much in the song. Not to forget the ‘Huyi-Huyi’ alliteration which can just not be ignored. If your girl is too shy to talk in exact technical words, make her watch this song and she will know what you talking about.

With greats like Madhuri and Sanjay Dutt in the song, there was no way this song wouldn’t have made it to the list. Right from the payal sound to the snake dance movements performed by the dancers, this song just makes you groove. All this while you are asking “choli ke peeche kya hai” and the actress is trying to save the embarrassment by saying dil and whatnot.

Till some time back, I actually thought that this song was about a pigeon who had perched on a high up place somewhere. But noooooooo. You really need to watch the video and listen to the song carefully to understand that not-so-subtle innuendo. Damn! me and my friends used to sing this song with the enjoyment with no bounds, as kids. Dear lord!

Telling each other what you are gonna do to them is always arousing. So here’s a little instructional song for the ones who more on the verbal arousal. The song has all the essential elements for a good Tharki song: A consenting couple, a group of people who agree to them consenting, greenery and mountains. What else does one need to enjoy this song?

This is song sung at sangeet or ladies night on the occasion of the heroine’s wedding. A very knowledge sharing kind of song, it just readies a girl for the enjoyment that awaits her. The song really delves into the feels one is going to feel. Now this is refreshing and educational, all at once.

This is song is truly a family song. With its reference to the in-laws in the home while the husband getting his swag on, is truly very understanding of the Indian family set up from the view of a newly wed. But wait, no one has just gotten married in the song, nor is it being sung in a family set up. Rather this is an item song being performed in front of a villain and his gang. Hmmm….I guess some songs are just a tease.

If you did not think that Amrish Puri had played enough negative roles, where you were actually scared of him, then here, this song is for you. In this song he is just enjoying at his home when a girl tries to seduce him asking him to come to “ganne ka khet” with her. Never saw Puri’s this innocent side before. Dance while you see an naive man being asked out.

An ode to the fair skin, this song is all about pure love and appreciating each other. The girl is very understanding that her skin made the boy go berserk and the boy is very vocal for his feelings for her. Where do you find such transparent relationships these days?

A very female oriented song where Karishma Kapoor tells Sunil Shetty clearly that if he shouldn’t turn off the lights. Why? Because she is scared for his safety in her hands. But does he listen to her warning? Not at all. When will people learn?

This song goes back to the Indian values. Right to the part where to be in love, you should be married. Kulkarni has made it very evident that she is all about familial duties and such. Now why would Kumar take so much time to “bharo maang” is anybody’s guess. But the female sure ended up making a whole song about the elephant in the room.

Who said that you need to have money to be in love. This song is all about cheap thrills. Love a girl, lie to her, marry her and tell her you have hots for her. Now that’s what all is important. But first….download this song and dance your heart out on this ChiChi special.

A bride who is not so blushing and a group of friends who are playing on a countdown till the girl gets into Doli, while everyone is being their sleazy best. Now this is what we call the freedom of expression. Or do we?

What to dance on, on your friend’s wedding? An experience you had “chane ke khet main”. Yes, tell her all about it, it will bring her good luck for her upcoming time.

This family is all about mutual appreciation. Earlier the wife is all over the husband to make love to her (with instructions) and now the husband comes out in public to tell the world how powerful his wife’s passion for him is. That’s not all, he appreciates her while doing zumba. Maybe getting ready for the next round.

Serenading a female was never easy. But when you add a contender to the equation, it becomes even more of a task. But here we have two brothers being each other’s wing man, while serenading the same female. Now that’s something.

If this song won’t make you more conscious of keeping yourself in shape then I don’t know what would. So what if we poke you in between with some gender based responsibilities. It is all in the spirit of keeping one healthy.

This dreamy sequence does more for us than reality right now. Then why not enjoy to the beats and the feels. Relive the Anil Kapoor and Madhuri magic with this one. Hopefully, they enjoyed being in the song as much, as some of us liked watching them.

Ending the listicle with this bonus legendary song that is an all time favourite of the masses. There are choreography groups who have actually made videos on this song with pretty amazing hip-hop choreography, completely ignoring its cheesy lyrics. Even now, most of the girls die to don that yellow chiffon sari and dance on the song.

Hope you have a full blown playlist for your enjoyment after going through this list.