The Beginning of Federer – Rafa Era All Over Again

With more than half of 2017 gone, tennis world is reminiscing the old nostalgic days of Roger Federer at his peak and Rafael Nadal refusing to accept his arch rival’s dominance. Federer is back to where he belongs. The undisputed king of grass winning his 8th Wimbledon and the 19th Grand Slam overall. Nadal too, fit and as hungry as a wolf. He is back to his realm on clay as he won his 10th French Open this year. Yes, let us spell it out to you again – T-E-N-T-H Roland Garros.

The reason this is such a cherish-able year among tennis fans, and equally satisfying to both these ridiculous dominants of the game, is that Federer won his first Grand Slam since 2012 (Australian Open) and Nadal won his after 3 years (last winning in 2014). Novak Djokovic, who lead the tennis domination in the absence of these two legends, is an extraordinary player in his own right. But truth be told, we missed the glorious Federer and Nadal of the past decade and THEY ARE BACK !!!

The US Open begins tomorrow. It’s another opportunity for the fabled rivals’ meetup. Rafael Nadal returns to the final Grand Slam of the season as the World No. 1, the ranking summit he reclaims after 4 years. Roger Federer will start the Grand Slam looking to win his 20th.

After Novak Djokovic announced taking a break from this year’s US Open, second seeded Andy Murray pulled out after failing to recover from his hip injury in time. Others missing out are Nishikori, Stan Wawrinka and Milos Raonic. With 5 of the top 11 players not in the running, a semifinal or possibly a final clash between Federer and Nadal seems imminent. This would be the epitome of titans clashing to take home the crown.

Both of them realize that they have begun the last round of their tennis careers. Nadal acknowledges this fact, “We are not 21 anymore.” Here’s a look back at the journey of the titans of tennis so far.

Roger Federer – The King of Grass When Roger Federer arrived on the professional tennis circuit around the dawn of the 2nd millennium (1998 precisely), not many would have suspected he would go on to dominate the next one with the finesse of seasoned surgeon and a crafty butcher at the same time. Federer arrived just in the nick of time. The effects of Pete Sampras were just waning and Andre Agassi was struggling. Considering how Federer devoured his opponents during his early days, it would be safe to say both Sampras and Agassi retired peacefully and gracefully.

Roger Federer won his first Grand Slam title at the Wimbledon in 2003. It was a title for which he fostered quite a liking and dominated the championship conquering it 5 times in succession between 2003 and 2007. He was recently crowned the Wimbledon Champion for a record 8th time. Aside from the green court, he also dominated the US Open winning it 5 consecutive times between 2004 and 2008. Federer also won his 5th Australian Open this year. He has also managed to win the French Open once in 2009 to complete a career slam. To better explain the supremacy of Roger over the past couple of decades, here are a few sentences you should read. Federer has spent a total of 237 successive weeks on the summit of ATP Rankings. That translates to 1659 days or 4 years and 6 months of utter dominance, untouched, undisputed.

Rafael Nadal – The King of Clay 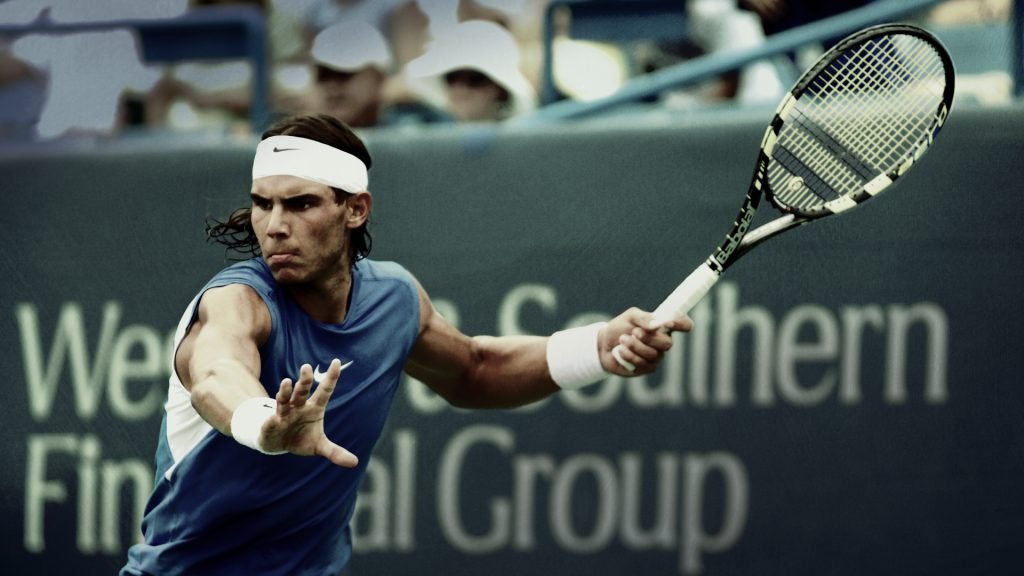 During the early 2000s, Federer’s fiercest rival debuted as a young headbanded teenage Spaniard named Rafael Nadal. By 2005, Rafa had already established himself as one of the players to look out for. He started the year’s French Open, his maiden appearance, as one of the favorites already. He defeated Federer in the semifinals en route to his maiden French Open and Grand Slam title. A result he would make his own in the coming years and cement his authority on clay.

Rafael Nadal has a total of 15 Grand Slam titles to his name. Second only to Federer (19) among the male tennis players in the Open Era (Serena Williams has 23). He has a career slam to his name, understandably. Here is the astonishing part – out of his 13 appearances at the Roland Garros, he has conquered the championship a record 10 times. No other tennis player has dominated a particular Grand Slam with such authority. Rafa defends his French Open titles with the ferocity of a lion. Federer owned the tennis court, wherever he played, spellbinding the spectators. On occasion, he ruthlessly gutted the opponent by not giving them a chance to even ask for pity. Against each other, however, the story changed completely. Nadal has had the upper hand whenever the two have faced off . This is evident from the head-to-head with Nadal leading 23-14 in their 13-year-old rivalry. It has been an even contest on all surfaces barring clay where the Spaniard leads 13-2. The two met in a Grand Slam final for the first time in the French Open 2006. Rafael Nadal emerged as the champion in a hard fought 4 set finale. Since then, they have faced each other in 9 Grand Slam finals and Nadal has won 6 of them. Federer had been unable to breach the Spaniard’s defense even once in their 4 meetings in the French Open finals.

Widely regarded as the greatest match in the history of tennis by analysts and pundits, however, is the Wimbledon 2008 finals. In a rain – battered final, Nadal stomped his prominence winning the first two sets. Federer, not willing to let go as yet, responded by winning the next two sets, also saving two championship points in the process. Nadal eventually reigned supreme winning the deciding set tie break 9-7 and broke the myth of an invincible Roger Federer on grass. Incidentally, this was also the longest Wimbledon final in the history of tennis, lasting 4 hours and 48 minutes.

The Reunion and Resurgence of Both 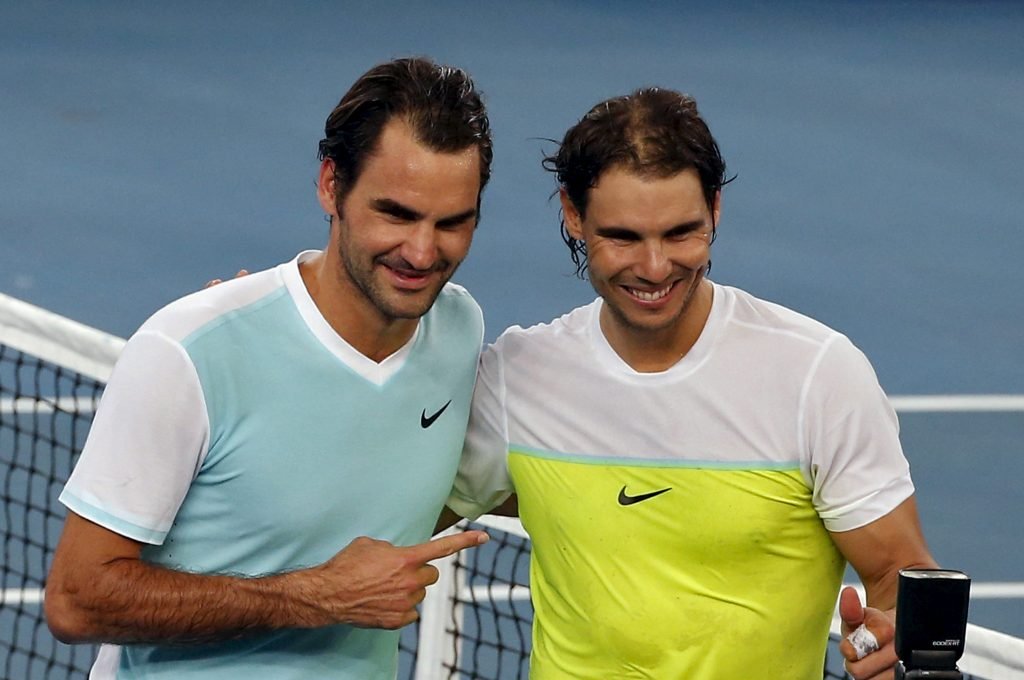 After 2008 Wimbledon final, Federer and Nadal met again in a Grand Slam final at the 2011 French Open. No points for guessing who won. But after a wait of 6 years (counting Grand Slam finals only), the duo faced each other in this year’s Australian Open. This was understandably the most anticipated match as the most glorious rivalry of the sport was waiting to unfold again.

What made this final even more sweet was the fact that both Federer and Nadal were coming off of an injury-ridden previous season. Nadal, owing to his wrist injury he suffered in the French Open that year, pulled out of Wimbledon 2016. Federer too struggled with knee injury during the first half of the season and decided to miss the second half of the year to recover from the injury which, as he admitted, proved instrumental in him regaining his form and fitness to stomp authority at this year’s Wimbledon.

At the Australian Open, the duo stormed into the final and gave tennis fans a few reasons to cheer as the age old rivals faced off in another Grand Slam final. In a marathon five-set final, an ode to their fierce rivalry, Federer ended up being the last man standing winning his fifth Australian Open. Rafael Nadal, not to be left behind, won his tenth French Open with sheer dominance demonstrated by the fact that he did not drop a single set in the tournament. With his 15th Grand Slam victory, Nadal also scraped past Pete Sampras’ tally of Grand Slam wins, now only behind Federer among male tennis players. At the Wimbledon, Federer won his 8th title and took his Grand Slam tally to 19.

The undisputed legends of the game, Federer and Nadal are by no means done with the game. Roger, 35 still has a few years left in him. That backhand still as fearsome as it was a decade ago. Nadal, 31 has had run-ins with injury throughout his career, but his game is on the rise again, his La Decima title at Roland Garros a testament to that. Djokovic, Murray, Roddick, Wawrinka, Thiem, Tsonga are some rising stars of the game who can cause a few troubles along the way. But there is no denying that it would be a sad day for tennis when one of these decides to hang up his boots. Good news though, we are at least a few years clear of that.