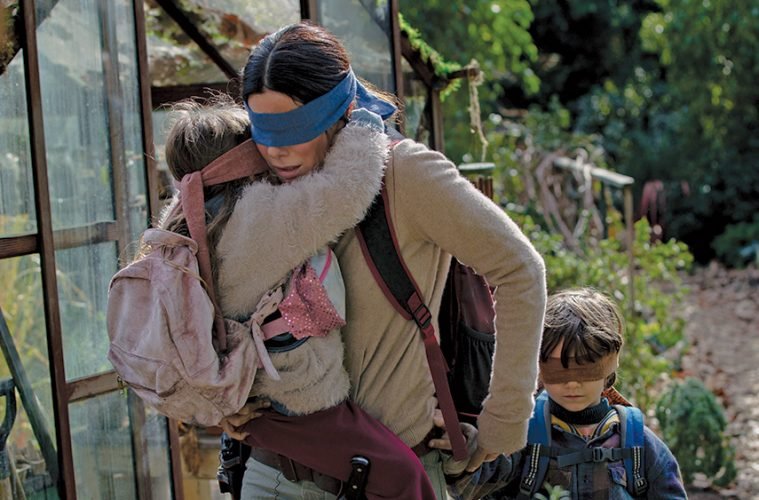 The Bird Box Challenge: Why Do We Need Statutory Warnings To Not Do Things?

I just want to live in a universe where the claim to fame for the Sandra Bullock-starrer film Bird Box is the fact that a record 45 million people watched it during the December holiday season. We can read into it as “our collective proclivity to choose an apocalyptic, sensory horror over socialising with the family”, for fun. But this is not an ideal world. So instead of doing the sensible thing: watching the movie, getting scared out of our wits, and imagining the innumerable ways apocalypse could strike, my fellow humans took a leap bit too further.

I was completely content with the frivolous arguments regarding whether one can or can not compare it to The Quiet Place. It was uncanny, honestly, to see that two movies released in the same year, that fed on the theme of sensory deprivation, also followed the same plot: a guardian/parent rescuing the kids under the evidently trying circumstances. But fellow viewers pushed Bird Box into the dark crevices of internet fame. Here’s how.

First, they came for the memes, then they just walked into walls

Here is some food for the guileless viewers: Netflix did not need to demarcate a marketing budget for the movie. It just took some clever decisions. Like the timing of the movie’s release falling on Christmas season. A roster of incredible actors like John Malkovich, Sarah Paulson, Tom Hollander, Lil Rel Howery, BD Wong, Danielle Macdonald, Jacki Weaver and Trevante Rhodes also helped.

But the plot of the movie is a clear winner: across five years, Malorie (played by Sandra Bullock) goes from being a reluctant pregnant woman to the most protective mother, when the earth gets attacked by mysterious creatures that cause mass suicides. The only way to be safe is to not see outside or when one is out in the open. This explains the blindfolds. When people close their eyes then they start hearing compelling murderous whispers that take the form of your worst fears (think dementors).

Me trying to piece together the plot of #Birdbox after only seeing memes. pic.twitter.com/q593qzMEch

Social media was soon flush with gags from the movie. Lo and behold, soon enough we had an inundation of memes. The movie’s virality is a direct consequence of everyone’s FOMO, and it preyed on it. So it didn’t matter that critically the movie’s motifs had been fiercely criticised for lack of originality. In times when algorithms influence what you watch next, and SEO keywording decides what will show up on your browser searches, no one is surprised Bird box did so well in numbers.

The memes and gags were so ubiquitous (& add to it the fact that the Netflix generation was referring to Sandra bullock as ‘that woman from Bird Box’), that you knew what the movie was about through simple pop culture osmosis. Yet, your FOMO told you to watch the movie, you know, to not miss any nuance or edge.

And then, things escalated. The movie hit the next milestone in the world of viral content: it gave birth to the Bird Box Challenge. It is stupid, often easily dangerous and as I will explain now, morally inane.

What IS the Bird Box Challenge?

It was terrifying to see the people in the movie walk through life with a blindfold, facing these dementor-like entities and looking for a safe space. Turns out, fear is the biggest motivator. Even when it comes to silly dares. Fans soon started performing the Bird Box challenge, where they blindfold themselves, and shoot themselves on camera as they go about daily activities with the blindfold on.

For a year that has been through the dark times (remember when kids were eating tide pods? When the Blue Whale Challenge literally took lives? Or the Kiki challenge which was SO CLEARLY an endangerment of lives), I assumed people know better. Clearly, I was wrong. The Bird Box Challenge grew viral within days of the movie’s release. There are accounts with the sole purpose of creating and circulating memes and gags, but how does someone enjoy walking into walls, and worse, hurting their toddlers while they do so?

From fiction to dare real quick?

Sure, there are people executing the challenge without any dangerous undertaking, but people (hopefully only) pretending to drive with blindfolds is not safe by any means. People have ended up in hospitals already.

So my friend thought it would be a good idea to do the #BirdBoxChallenge but in the end she ended up with a fractured foot and might be needing surgery 😂. pic.twitter.com/TetShH0bBE

What does not help matters is when ‘influencers’ indiscriminately become complicit. Morgan Adams made the challenge mainstream on YouTube with 2 mil views. YouTubers George Janko and Jake Paul also attempted to drive while blindfolded as part of the Bird Box challenge. How far are people ready to take a joke, and what repercussions are they ready to bear for these ‘views’?

Things aggravated so much that Netflix had to issue a warning:

Can’t believe I have to say this, but: PLEASE DO NOT HURT YOURSELVES WITH THIS BIRD BOX CHALLENGE. We don’t know how this started, and we appreciate the love, but Boy and Girl have just one wish for 2019 and it is that you not end up in the hospital due to memes.

Again, Netflix was happy with the organic marketing that the viral memes did for the movie. But, it can hardly claim ownership over these trends. Of course, the warning came more from a place of pre-empting any responsibility it might have had to bear. The actual concern doesn’t end here. Here’s the thing: you think it is only fair to point out that in taking the challenge too far, people are putting themselves in mortal peril. But that’s not the only adverse impact it is having.

And I am telling you about the other dimension of this trend. To have you on the same page, let’s begin by saying that blindfolding is not inherently problematic. We’ve played games as a kid and team-building exercises as an adult around this theme. Not to mention, Indian TV shows have blossomed romances with this antic. It is harmless, until it is not.

The challenge has the potential to make us insensitive towards blindness. Because the memes are also focusing on the blindfold rather than the impending doomsday. One research suggests, “if you slap blindfolds on people and ask them to fend for themselves, and don’t give them any training or instruction or exposure to blind role models, these people are likely to have an experience that is negative and scary. That type of experience will reinforce what they already believe about blindness.

People already have fears and misconceptions about blindness, and if you give them an experience with blindness that is what they expected it to be, their attitudes are going to be reinforced.” If we are to become inclusive spaces where disabilities are not frowned upon as barriers, we should not be taking these challenges or encouraging such unruly behaviour, or like Netflix said, “Can’t believe I have to say this…”