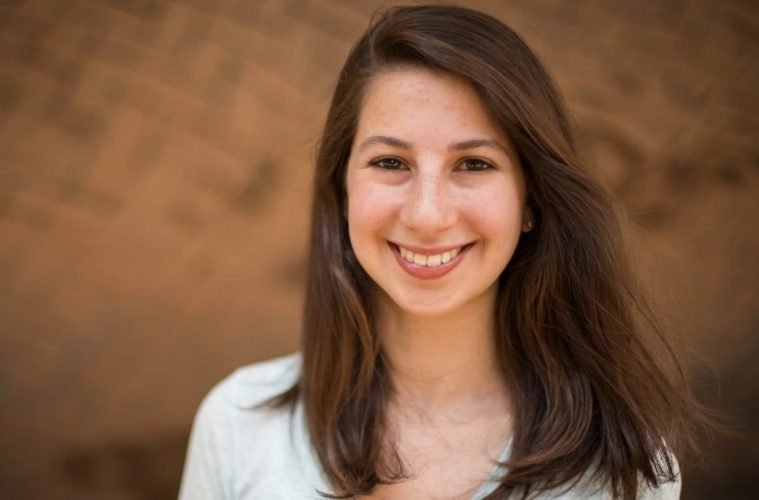 Year 1929. Virginia wrote – “The history of men’s opposition to women’s emancipation is more interesting perhaps than the history of that emancipation itself.” Back then, she was uncannily predicting the thought process 90 years later. But we are going to talk about Katie Bouman.

In an extraordinary achievement, on the 10th of April this year scientists captured a picture of a Black Hole. A feat that was almost impossible, till a team of about two hundred scientists and engineers proved otherwise. A black hole is a region of space with a mass so large and dense, and the size so compact, that even light cannot overcome its strong gravitational attraction; making it virtually impossible to photograph. The triumphant team comprised of scientists from MIT’s Computer Science and Artificial Intelligence Laboratory, the Harvard-Smithsonian Centre for Astrophysics and the MIT Haystack Observatory.

The breakthrough was achieved with the help of the “Event horizon Telescope”, a large telescope array consisting of a global network of radio telescopes, observing the event horizon of two different black holes, one at the centre of the huge elliptical galaxy Messier 87, and the other one, called Sagittarius A, the black hole at the centre of our own galaxy, the Milky Way. Messier 87, for the record, resides 53 million light-years from Earth. It has a mass 6.5 times that of the Sun. Capturing the first ever image of a black hole is a major event. It is a feat equivalent to clicking a picture of a grapefruit on the moon, from the Earth.

The enormity of capturing the image of the Black Hole can be gauged by the fact that this evidence confirms Einstein’s Theory of General Relativity. It also confirms the interrelationship between gravity and the warping of space-time.

Who is Dr Katie Bouman

In the massive wave of euphoria that swept over the internet, one particular picture of a researcher by the name of Dr. Katie Bouman, apparently in the middle of an emotional moment when the image of the black hole first appeared, went viral. Dr. Bouman has been an integral part of the cumulative process of the generation of the images, right down to the developing the algorithm that made it possible.

A BBC picture, celebrating the representation of women in STEM, depicts Dr. Bouman with the stacks of image data, alongside the image of Margaret Hamilton; who is standing next to the stack of the Apollo Guidance Computer source code. Margaret Hamilton was the Director of Software engineering Division of the MIT Instrumentation Laboratory, which developed on-board flight software for Appollo space program which enabled the first man landing on the moon in 1969. The BBC picture went viral among the netizens. 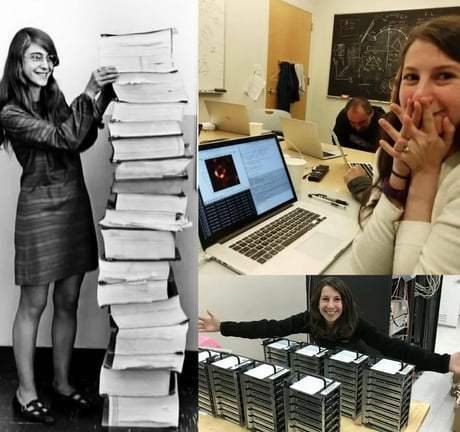 And that is when a few misogynistic men decided to question Bouman’s contribution to the project. These self-proclaimed seekers of truth posted comments across various social media platforms. They tried to discredit Bouman on Twitter, Reddit, Facebook by asking what she had done. Why was she hogging all the limelight for no reason. Not satisfied, certain trolls went a step further  and created multiple fake profiles of Bouman, posting malicious content to discredit her.

The Team Made It Happen

Unfazed, Bouman went on to post another picture- of the full Event Horizon project team, stating “No one algorithm or person made this image…………it required the amazing talent of a team of scientists from around the globe and years of hard work to develop the instrument, data processing, imaging methods, and analysis techniques that were necessary to pull off this seemingly impossible feat. It has been truly an honor, and I am so lucky to have had the opportunity to work with you all.”

Enter the Black Hole of Patronising

The Wikipedia definition of a troll is, a person who starts quarrels or upsets people on the Internet to distract and sow discord by posting inflammatory and digressive, extraneous, or off-topic messages in an online community (such as a newsgroup, forum, chat room, or blog) with the intent of provoking readers into displaying emotional responses and normalizing tangential discussion, whether for the troll’s amusement or a specific gain.

There we have it, the only requirement then, for being able to discredit someone’s beliefs, illustrious work and achievements, that too under the safety of anonymity, in most cases, is a working internet connection. Sadly, the acts of these trolls have established what is already known only too well, that the glass ceiling is not only intact- but is being continuously supported and reinforced.

Earlier this year, Prof. Alessandro Stumia of Pisa Universitya had candidly declared at a workshop conducted by CERN:

Physics was invented and built by men, it is not by invitation.

Reduced to its most basic form, the idea runs thus – Girls, women are not meant for science. And if you do see them doing well, they are probably just getting all the attention because they are females.

Cultivated from the earliest stages; where textbooks depict scientists majorly as men with unkempt hair in white lab courts; the idea that women could fit into the role equally, is quite alien to most children, specially the boys. Fast forward to a decade and a half, the same chauvinist boys, now adults (albeit only physically); feel it is their right to put a female scientist into her place.

Their strongest argument is the difference in number of female versus male scientists. For every six famous scientists an average person can name, they can maybe name only one female scientist. That’s Einstein, Newton, Stephen Hawking, Tesla, Edison vs Madam Curie.  Ergo, the staple argument goes that women are, inherently, not equipped to meddle with the sciences.

As a society, we are still largely unaware of the contributions of women like Donna Strickland or Rosalind Franklin. Not just our textbooks, but the social media is also at fault. It has to be the responsibility of all platforms showcasing public opinion. So as to maintain the basic standards of human decency and etiquette.

This is not just about a Bouman, or women in STEM; it is about every single person who had to face the backlash from unnamed persons on the internet; empowered by their anonymity and ignorance, calling journalists “presstitutes” and “libtards”, and sending out anonymous threats. In a world where anonymity has become the weapon of choice for attacking public figures; it is about time that people have to take responsibility not just for their actions, but also for their words.