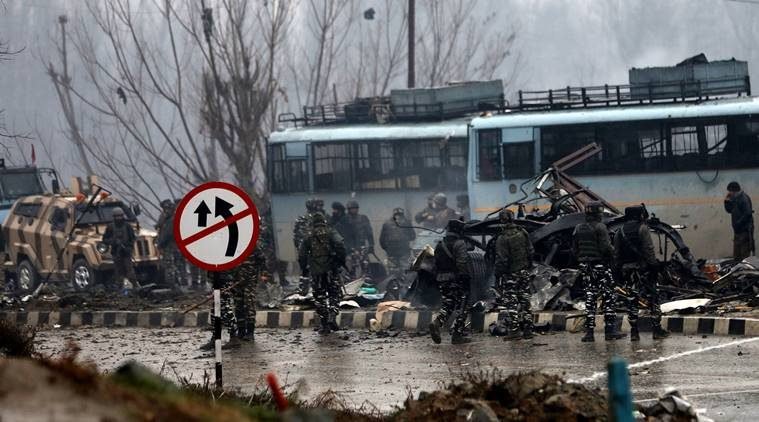 ‘Dastardly attack results in 44 CRPF jawans getting martyred’
I was so shocked by these words of Pulwama Attacks flashing across the news ticker that I could not move for a while. The painful realisation dawning that this is not just another cowardly attack by so called ‘freedom fighters. This is plain and simple mass-murder. What purpose does it serve to blow up a bus full of security personnel merely coming back from their leaves?

The biggest, more jarring thing that arises from this mass murder is the intelligence failure. The Standard Operating Procedure calls for movement of a maximum of 1000 men to their holding areas. Bad weather and abject lack of planning resulted in 2500 men moving together at once. The grim, fortunate happenstance in all of this is the number of casualties. Since the bus in the middle of the convoy was hit and not the ends, the comparative causalities are not as massive. This did not turn into a painful reminder of the Dantewada attack.

What is even more disturbing is the pattern of attack. Since the launch of Operation All-Out in the valley, in the aftermath of the Uri attacks in 2016, militants have been losing ground in the valley. The place is the witness of declaration of a ‘Militancy-free’ place, this year. This strike is more of a challenge to all these achievements.

The kind of attack itself is a radical escalation of the conflict. The last car bomb that went thundering through the valley was in 2001 when J&K parliament building was struck killing 38 people. Incidentally Jaish-E-Mohammed is claiming this attack too. The tactic is a game-changer in the valley, as it not only reflects the desperation in the valley, it is also similar to the style of attacks seen in the middle-east recently with ISIS or Al-Qaeda affiliate Al-Nusra front. A brainwashed youth’s video is being circulated on the social media by the terror group which took responsibility of the attack and threatened further attacks.

The Reaction In The Valley

Thing that bothers me the most is the reaction of jubilation this attack is receiving by the local populace of the valley. There have been terrible attacks before. But the reaction from the general population is usually that of mellow to indifferent at best. Now, their reaction is akin to a group of people at war with India. Celebrations on the street for the merciless murder of security personnel does not look like actions of a people holding Indian passports. Although condemnation has been seen in many quarters, the mood is of jubilation amongst these men. What kind of ‘freedom struggle’ sends a young, drugged up boy to blow himself and 40 security personnel up?

The War Is On, But With Whom?

All we can see is the Kashmir valley descending into an orgy of violence and fear psychosis. This is accompanied by a terrible collective psychological trauma on both sides. This is leading even more young boys picking up arms. Initially, a bulk of fighters were foreign mercenaries. Now, it is mostly young local boys getting a brainwash. The terror groups post their pictures with guns on social media and then there is no turning back. These young boys come in view of the security forces and caught. This leads to organization of massive funerals for them, which basically act as recruitment rallies.

What is clear that all sort of military, political and economic solutions are failing. This attack is in a way a defining point. It conveys how deeply and desperately entrenched the conflict has become. Decisive quick action is necessary and expected.

The views expressed in this article are that of the writer. Unbumf is not liable for these in any way.