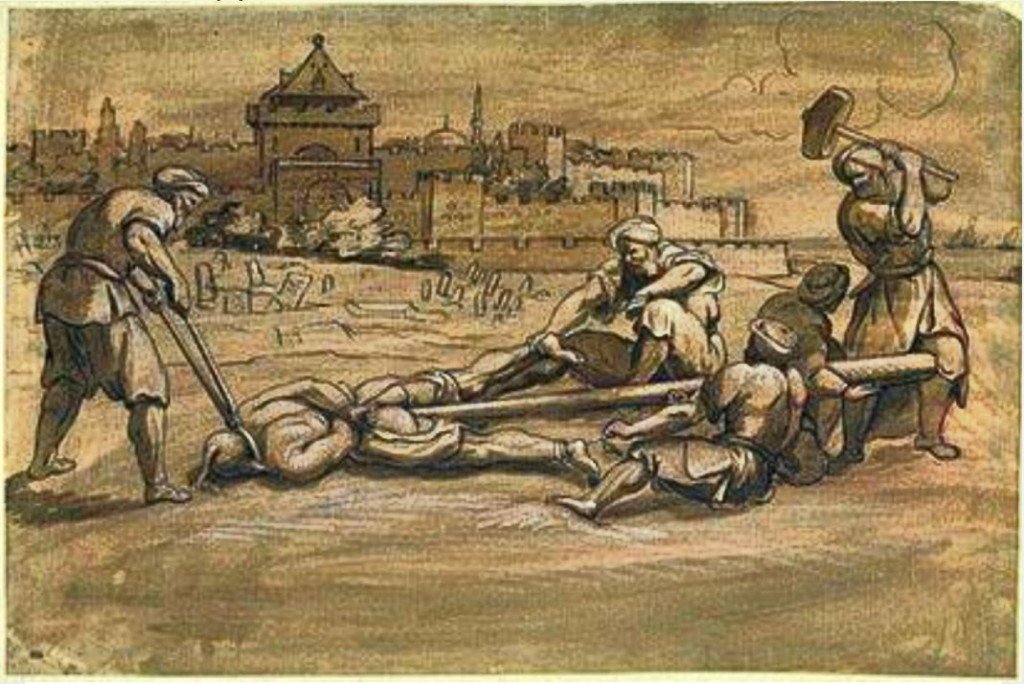 War and Peace, Crime and Punishment, world war, terrorism, civil war, riots, knife fights, fist fights. Violence is somehow an understandable part of our existence. Now some of this violence is mass violence due to disagreement between two larger parties. But some of the violence is on individual level inflicted on some, upon one person’s accordance. I am talking about torture here.

Tortures have been the part of human history since time immemorial. Other than the brutality, what is really revolting about a torture is that some people have actually gone to creative lengths to deliver them. So here is a list of some of the most brutal tortures that have ever existed:

Known to be one of the most brutal and slow ways of killing a human, the Spanish Donkey prevailed during the time of Spanish inquisition. In this, the victim is put across on an apparatus that has a triangular wedge on top. Then the torturer ties weights to the victim’s feet, and keeps increasing the weight till the weights ultimately pull the victim down. This would cause the victim to be slashed into two halves.

This 14th Century torture invention of Germany is another wonder of man’s creativity with inflicting pain. Shaped like a human and of the similar height, this cabinet had doors with handles on the outside but an interior full of spikes. Here the victim would be enclosed inside the cabinet. The doors would be shut hard till the spikes would pierce through the victim’s body. The device is designed with such care that there is a blood gutter at the bottom. This blood gutter drains all the blood out of the device as the victim keeps losing blood. Creepy, right?

Not so much as the fact that various museums keep this as a treasured artifact in exhibit.

Also known as the Sicilian Bull, here the victim would be enclosed in the belly of the brass bull. Afterwards a fire would be lighted below the belly of the bull. The hollow brass cavity of the bull would amplify the screams of the victims, while the fire slowly roasts the human inside, alive. By the end of it the human inside would be in such a bad shape that the skin and muscles would slide right off the bones. This method of torture was famous in ancient Greece.

Here the victim would be made to sit in a tub filled with water, uptill their necks. The victim’s face would then be painted with milk and honey to attract bees, which would then sting the face of the victim. In the meanwhile the executioner would regularly keep feeding the victim, thus forcing him/her to sit in their excrement. Because of all the filth in the tub, maggots and worms would start breeding in the tub, thus feeding on the victim. This slow death that is indirectly caused by the victim himself/herself is also one of the filthiest torture methods.

This torture has been devised especially for the female of the species. Known to be inflicted on any female being known of adultery, abortion or witchcraft, this torture method is insane. Here the apparent offender is paraded naked in the streets and then tied to a wall. After that a spider like metal claw is used to rip out the breast (by shredding with the claw) of the accused. Some women were given away to the men of the town to be raped before being tortured, in ancient Rome.

A lot of Bamboo plantation was present in earlier China. This Bamboo used to grow at high speed, with growth upto 3 feet in a day. In such a scenario, the torturers would cut the Bamboo in a patch closest to the roots, thus forming a patch of Bamboo tips. They would then suspend the victim horizontally on the path. As a result the speed with which the Bamboo grew, it would grow right through the victim’s body. Thus causing a slow, painful and a conscious death.

You might have seen this 16th century torture in various movies like Too Fast Too Furious. Here the victim is tied down to a table or a flat surface. A rat is put in a steel bucket or cage and inverted on the victim’s body. Then the bucket is heated using a torch. Once the bucket gets heated up the rat inside starts digging in the human body to escape the incredible heat. Thus, this leads to the victim’s body being eaten into by a rat. If the victim does not die of this on the spot, he ends up dying of disembowelment.

Thinking of existence of such things in reality is a resounding reminder that atleast we have evolved a bit as humans and the Humans Rights activists surely do not seem so bad now. Also, considering that these are just a few ways in which we have devised ways of killing disobedience, we should thank our stars to be born in the era when torture is not legal.