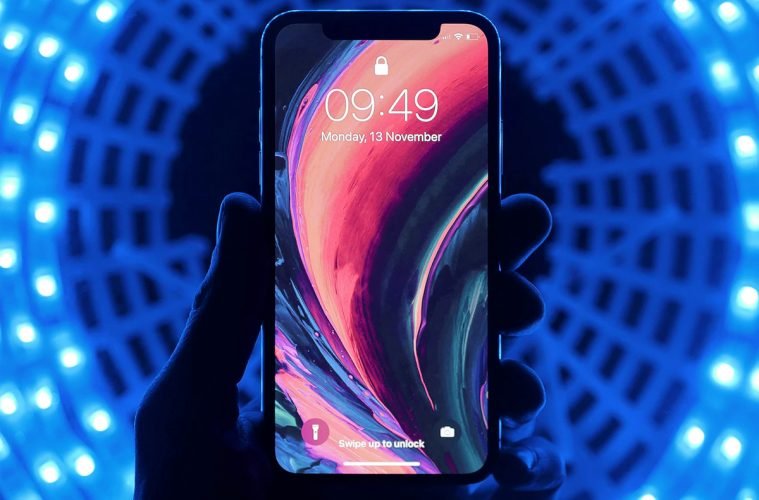 The Notch, Bezel-less Screens and Other Smartphone Trends To Look Forward To in 2018

Over the past half a decade or so, the smartphone market has become volatile with all its unpredictability and the breakneck competition to grab that mouth-watering market share and the users approval. The rate at which smartphones become obsolete these days is astounding. Smartphone companies are under tremendous pressure to innovate quickly and significantly each year. Or they would perish and no one would notice. Blackberry, HTC, Micromax are just some examples who lost their footing in the market.

The monopoly of the big names like Apple, Samsung, Google is being neutralized with each passing year. New players like OnePlus, Vivo, Huawei, Xiaomi are taking risks and innovating at a break-neck pace. Gone are the days when users used to stick with brands come what may. As this decade nears its end, people are learning to reject products with design flaws and terrible user experience to move to a competitor with zero regrets.

Companies have learned to pick their battles and are sticking to them for the most part. Vivo is making strides in cameras. OnePlus has declared war on the flagships. The last few years have been all about adopting trends that became norms once the public approved. USB-C, Fast charging, Fingerprint scanning have been some of them.

Which are the expected trends to rule the market this year or maybe years to come, you ask? Well, let’s take a look. 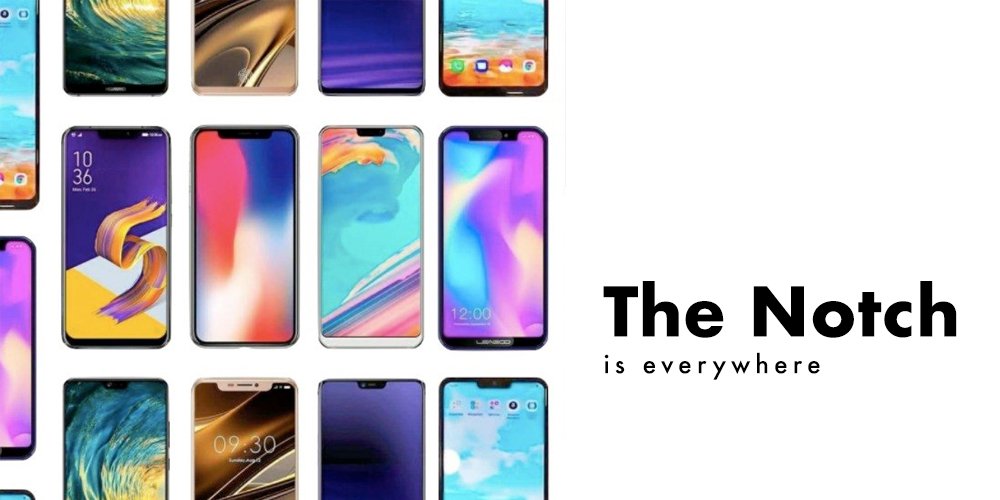 Apple, continuing its tradition of introducing controversial design decisions, introduced a wide-ass notch right on the forehead of their newest flagship, the iPhone X. Although the Essential phone sinned first, with the goal of increasing the screen real estate with a curved notch around the front-facing camera.

The iPhone was Apple’s most significant redesign since the inception of the iPhone 10 years prior. They did away with the home button with more emphasis on gesture controls. Facial recognition was one of the iPhone X’s standout feature. To fit in a bunch of sensors, front camera, speakers etc, they went ahead with a wide notch on the top of the phone.

While Apple stood by its design choice amidst furor and users asking for John Ive’s head, the company asked developers to ‘embrace the notch’.

Although the notch serves a functional purpose, it soon became a status symbol and almost all major companies decided to blatantly copy the design. But more so for the aesthetics than function. Soon it became a trend and looks like it is here to stay. Until Apple decides to change the design later this year.

2. Bezel-less is the Future 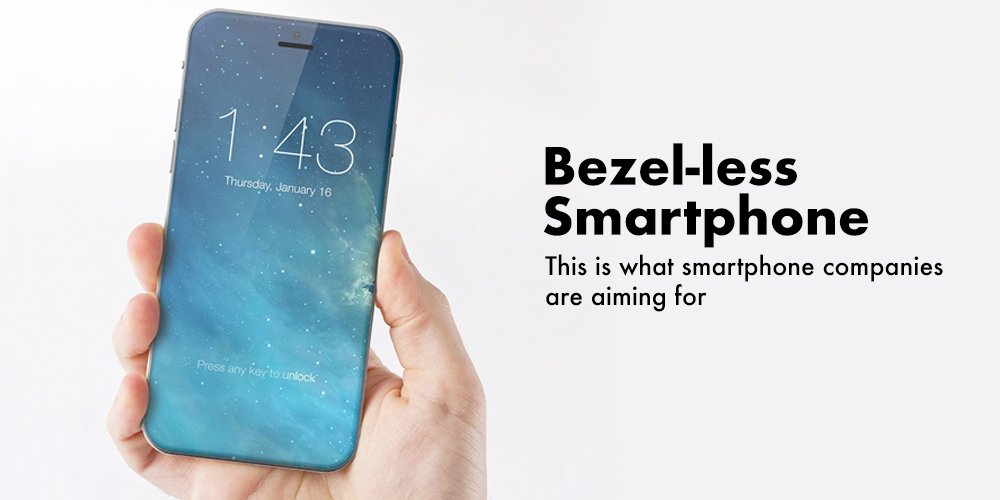 With the notch, Apple took one step towards a bezel-less future, demand for which had been gaining steam over the past few years. Bezel-lessness means relocating the front-facing camera and the fingerprint scanner elsewhere. While the iPhone X presented a solution by doing away with Touch ID entirely, replacing it with state of the art Facial ID, the front camera still poses a considerable challenge. The copycat android smartphones may not be able to implement a robust security system required to replace fingerprint scanners with facial recognition while keeping the cost in check. However, moving the scanner to the back somewhere around the camera seems to be a viable and already existing alternative. Another option is to find a way to move the fingerprint scanner under the screen.

As for the front-facing camera, Vivo Apex has implemented a movable camera that slides up as soon as the selfie option is activated. Although an innovative solution, it has drawn concerns over the durability of the mechanism since it introduces a moving part in the mobile.

Another Chinese brand and Vivo’s sister brand Oppo released a much more elegant solution on the same lines of adding a moving part with their Find X, just a week after Apex’s launch.

Xiaomi has been the only company so far to have released a nearly bezel-less smartphone with the Mi Mix, although it does have a chin.

Looks like the battle for the bezel champion is concentrated in China for now.

3. Under the Screen Fingerprint Scanners 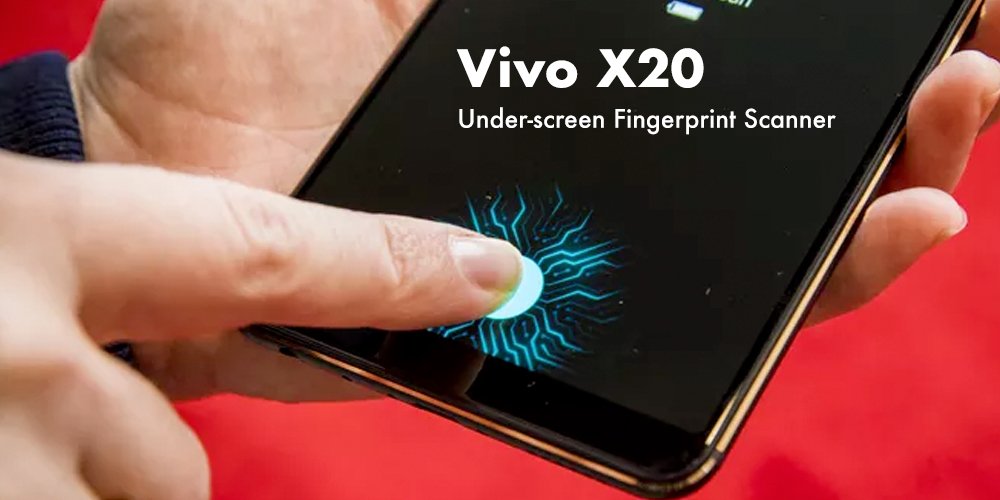 In the quest to annihilate the bezels, a lot of smartphones may be integrating variations of in-screen fingerprint scanners once the phone launching season commences later this year.

Vivo, leading the charge on this one, launched the first smartphone with a working prototype of this technology with their Vivo X20 UD. This scanning tech is based on optical scanning i.e. the user’s fingers are illuminated as soon he/she touches the screen, the reflections of which are used to identify the fingerprint patterns. 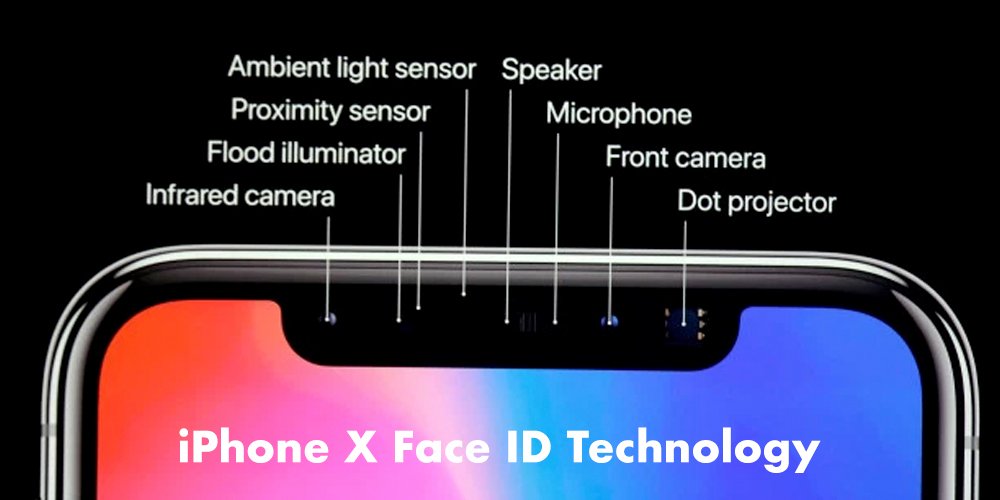 Apple made a huge bet with Face ID with the iPhone X, making the Touch ID obsolete, or at least for the time being it is. Apple uses the TrueDepth camera system, which comprises the proximity sensor and the ambient light sensor, along with an Infrared camera and dot projector to capture, map and recognize an individual. Face ID is said to be at least as fast, if not faster, than the Touch ID. Apple went one step ahead and gave a fun little implementation for Face ID with the Animoji (animated emoji).

OnePlus released a software update that enabled the existing hardware to mimic the facial recognition of iPhone X. Although not as mighty and secure, OnePlus’s implementation is faster than Face ID. Bask in the glory, for the time being, Android.

Samsung is leading the charge when it comes to Iris Scanner tech. They have implemented the tech in their Galaxy S8 and Galaxy S9 lineup of phones. It’s great, it’s cool.

Security technology is thin ice and attracts the highest scrutiny from everyone, hackers and user alike. Phone makers will, therefore, need to tread lightly. This also makes the security technology one of the most exciting features to look forward to in smartphone launches. 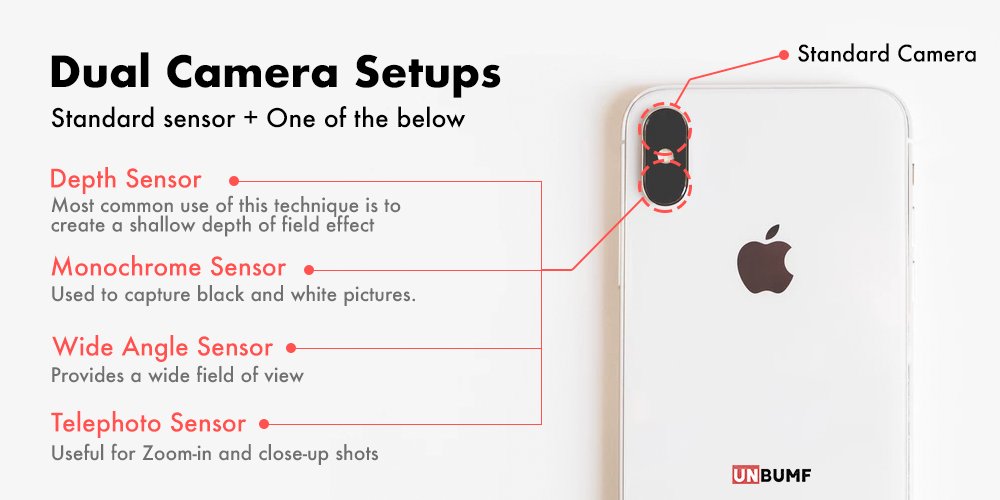 The trend started probably sometime around 2016, with all major manufacturers have already implemented the dual-camera setups in their flagships. Google, with their Pixel lineup of smartphones, seem to be doing okay with a single lens, might jump on the bandwagon and complete the circle this year.

There are mainly 4 types of dual camera setups – with depth sensors, monochrome sensors, wide-angle camera and telephoto camera. Depth sensor camera setups are the reason behind the widely popular Portrait modes in smartphones like the iPhone X, Pixels, OnePlus 5 and OnePlus 6 and Vivo X21. These sensors mimic the bokeh effect of the prime lenses (fixed focus 35mm, 50mm, 85mm etc) in DSLRs. Monochrome sensors are found in Motorola phones like Moto Z2 Force and are, honestly, a waste of camera sensor. The wide-angle camera setup is present in LG G5, LG G6 and comprises of a 12mm camera at f/2.4 aperture. Wide angle lenses are used to cover as much of the scene as possible and are mostly used in landscape photography. The Galaxy lineup of phones includes the telephoto camera setup. They have a dedicated sensor for optical zoom, helpful in closeup photos.

A dual camera setup is exciting for photography genre as photography is becoming more accessible to everyone. Although far off from replacing DSLRs, a mobile camera does make a handy camera to have as ‘the best camera is the one you have on you.’ 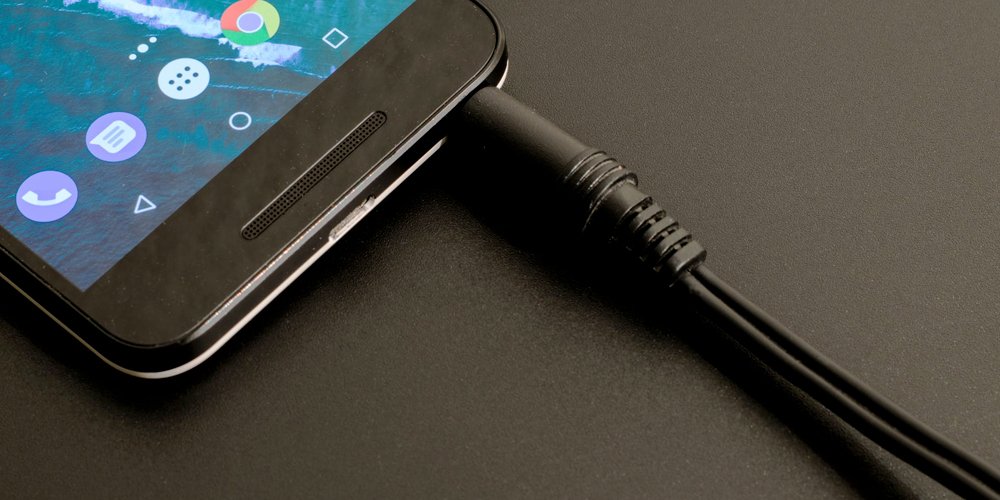 Apple was the first smartphone maker to mercilessly kill the headphone jack with the iPhone 7. As the music-addicted generation trolled Apple with the ‘Jack and Rose’ memes and shaming Apple for killing Jack, Apple stood its ground. Apple’s solution was the AirPods, which of course, were sold separately.

Apple decided to remove the beloved headphone jack because they eventually wanted to make bezel-less phones, which they pretty much did with the iPhone X. The 3.5mm headphone jack was a hurdle in that quest. Google also removed the headphone jack from their Pixel 2 phones. They released a Bluetooth solution called Pixel Buds, to rival the AirPods.

With a solid reason behind the move, other companies are just delaying the inevitable by not removing the audio port yet. Wireless is the way to go and wireless headphones, earphones, AirPods and Pixel Buds will only make the 3.5mm audio port redundant in future. This year could well be the year we face this harsh reality and say goodbye to Jack forever. If the Mobile World Congress is to be believed, this IS the year. 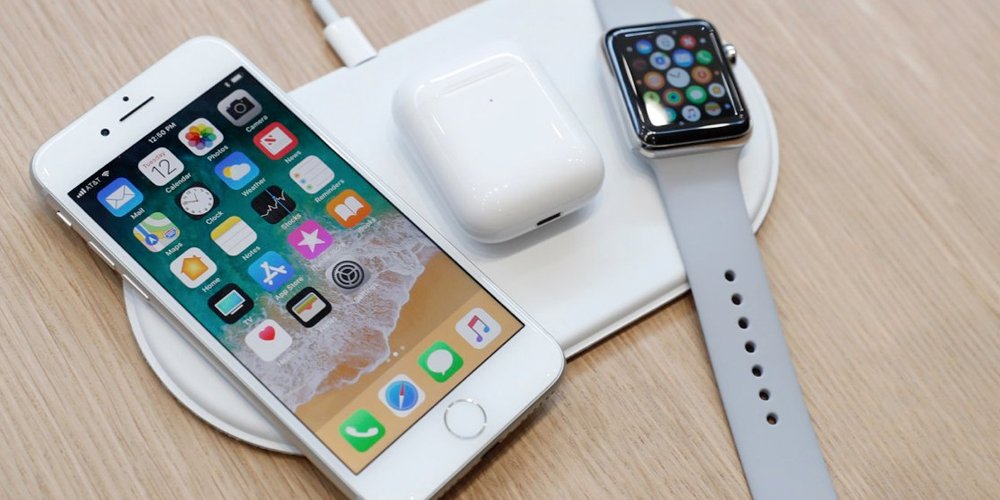 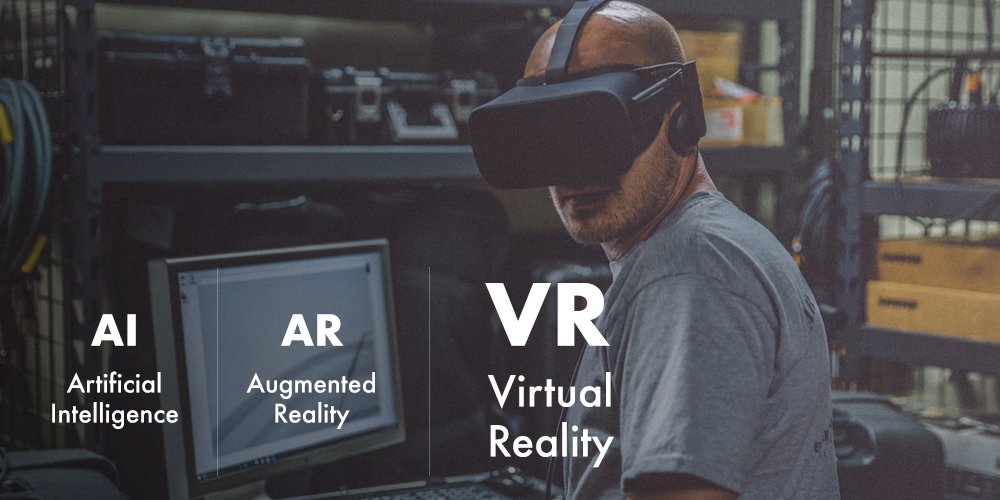 Google made is abundantly clear that they are going to pursue the AI dreams to make life easier for users. In their developer conference, I/O 2018, they introduced a lot of small features in numerous products incorporating the advantages of AI. For instance, the smart compose in GMail, Google Duplex, and using AI to enhance the experience of Google Photos.

Augmented Reality (AR) is another one exciting futuristic tech both Google and Apple are pursuing aggressively. Apple’s ARKit framework for iOS, MacOS and Google’s ARCore framework for Android will enable developers to bring AR apps to life. IKEA Place by IKEA and American Airlines have already made tremendous strides with AR. Google has integrated AR experience within Google Maps.

We might see a lot of smartphone companies taking full advantage of the AI, AR and VR capabilities of phones as a means of staying ahead of competition, and providing exclusivity to their users this year.