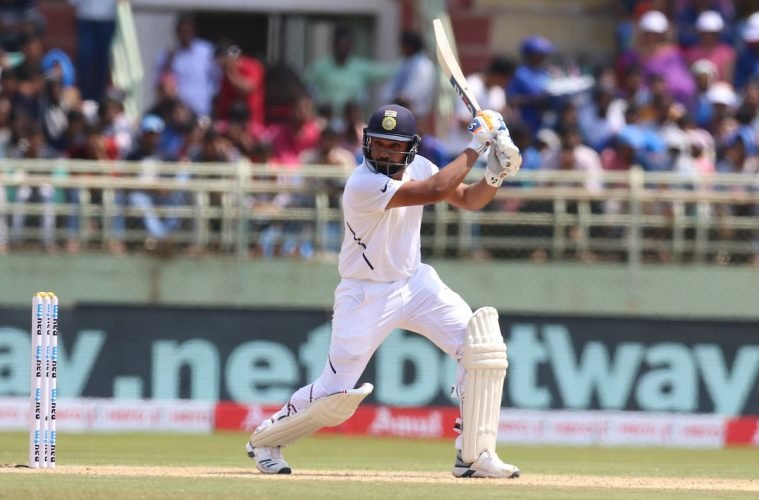 I missed out on the last World Cup in India and I am keen to make this one count.

And rest was history!

2019 has been a memorable year for cricket. This is the year when the inventors of the game finally laid their hands on the World Cup trophy that had forever deluded them. It was also the year Afghanistan won their first ever Test match. India recorded their first ever series win Down Under. It was also a year for individuals. Andre Russell. Steve Smith. Ben Stokes. Jofra Archer. For India, it was their dashing opener Rohit Sharma!

Five centuries in the World Cup. A feat that had never been conquered before. But then this is what Rohit does, the unthinkable. It was also the year he led Mumbai Indians to their fourth IPL title as a captain and now establishing his ascendancy in the Test format.

The elegant opener smashed a classy 529 runs against South Africa through the series at an unbelievable average of 132.25. His strike rate of 77.45 was also the highest in the series. This was the perfect opportunity for the Mumbaikar to prove his audacity with the bat and he grabbed it with both hands. He has been a force to reckon with in the limited-overs format for some time now. However, the phenomenal run in the series against Proteas has given him a new lease of life in Test cricket.

Going Down The Memory Lane

The Mumbai Indians skipper was already a household name in International Cricket when he made his international debut back in the 2007 WT20. His selection was based on his terrific performance in the domestic season where he turned the tide in his favour representing Mumbai. He began his cricketing career with a fifty against South Africa in what was a do-or-die game. His cameo of 30* (16) in the WT20 final allowed India to reach a respectable total. 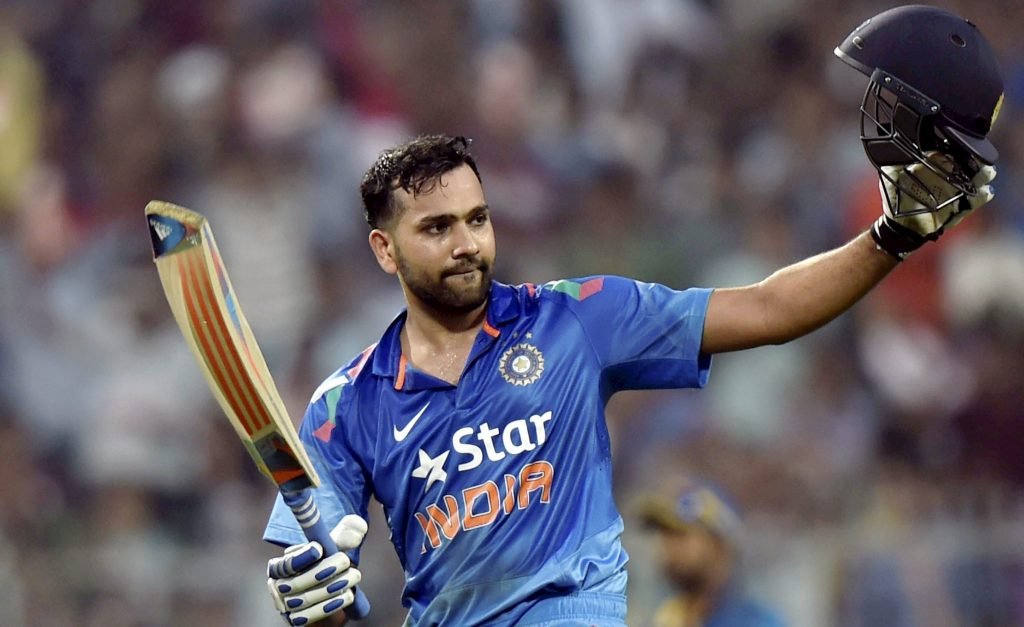 It was his performances in the CB series in 2008 which earned him a lot of accolades. However, the journey wasn’t always on cloud nine for the youngster. A formidable Indian side that was filled with a plethora of talent didn’t have much vacancy. Also, Rohit’s topsy turvy run with the bat didn’t help and he was soon excluded from the side.

You have to accept failure and success and keep moving on, that’s what I have done.

However in all these years as he strived to become a regular member of the Indian team, Rohit Sharma compiled tons of runs in the Ranji seasons. Yet, his career took a phenomenal turn only when he was given a chance to flourish as an opener in the limited overs format during the Champions Trophy in 2013. His career graph suddenly went soaring into the sky. And there was no looking back from thereon.

Six years down the line, he is regarded as one of the greatest openers in limited overs cricket. Especially in ODIs, his success as an opener has been second to none, with him averaging 57.42, the best for any opener with more than 1000 runs. The three ODI double hundreds and four T20 hundreds speak volume of the kind of ruthlessness he has displayed at the top.

However, there were few reservations over the same in the traditional format. While he began his Test journey with a bang scoring two consecutive centuries in 2013, the lack of consistency couldn’t make his place permanent in the squad. Also the fact that it was difficult to adjust when India had four back-to-back overseas tours lineup right after his debut. Hence, Rohit couldn’t keep his place for a longer duration. For someone who was so successful in limited overs cricket, it often surprised many as to why India hadn’t pushed him in the Test format.

No … you can’t be as talented as Rohit Sharma and not crack test cricket .. India needs to stick with him !! Don’t worry about the stats use your eyes and gut feeling..

Right from the moment India announced the playing XI for the first Test, all discussions switched from Jasprit Bumrah’s injury to Rohit opening the innings. After trying half a dozen batsmen for the role in the last few years, the heads had finally turned to Rohit. Arriving at the crease, Rohit didn’t take much time to settle down as he immediately got off the mark with a boundary on the very second ball he faced off Proteas’ spearhead Kagiso Rabada. 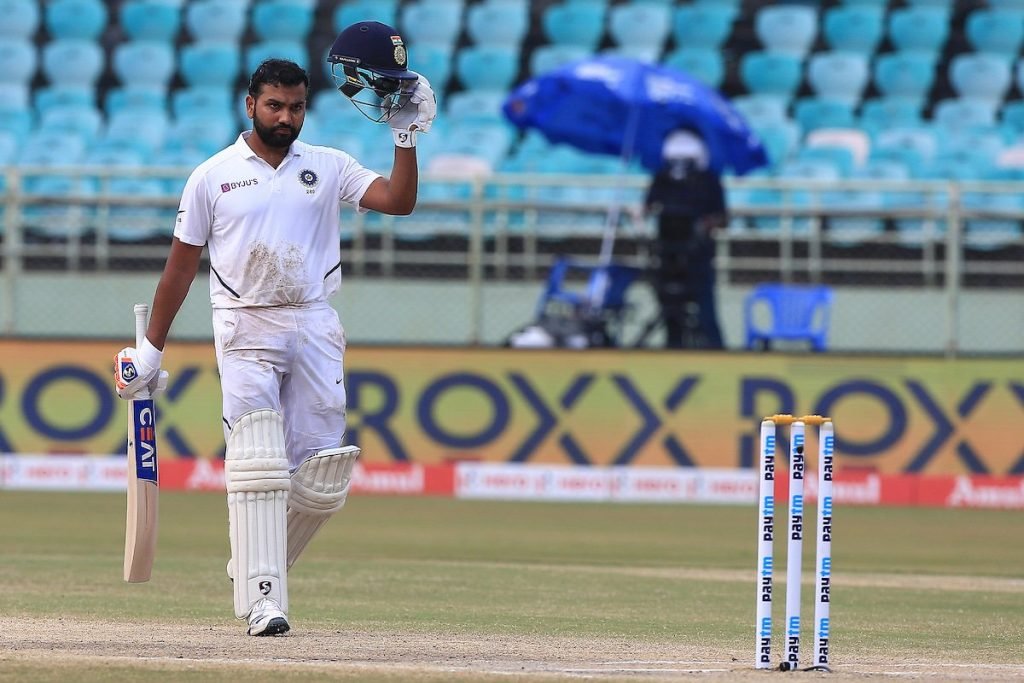 Throughout the series, he stuck to the basics. Rather than rushing to score quick runs, he was looking to survive, something which Indian openers had failed to do in the recent past. However, once the pacers were done, Rohit would come on his own and become quite comfortable. He continued to bat with restraint through the course of the series before deciding to go all bonkers. The team management, especially Kohli, was overjoyed as Rohit raised his bat in the first Test. He scored a spectacular 176 runs at a strike rate of 72.13, which included 6 sixes and 23 boundaries. The move to shift Rohit at the top order had worked, but he was just getting started.

Just when everyone thought that Rohit Sharma had already delivered with the bat, he had something even more astounding to deliver. As India walked out to bat in the second innings, he again provided a glance of his wide array of cricketing shots. Keeping up with the quick scoring rate, he went after the spinners again. This time, even more confident as he went down the track making it look like he had switched gears from Test to T20 in no time.

Just after completing his second consecutive century in the same match, Rohit deposited three back-to-back sixes into the stands off Dane Piedt, who kept searching for answers against him but ended up at the cleaners every single time. 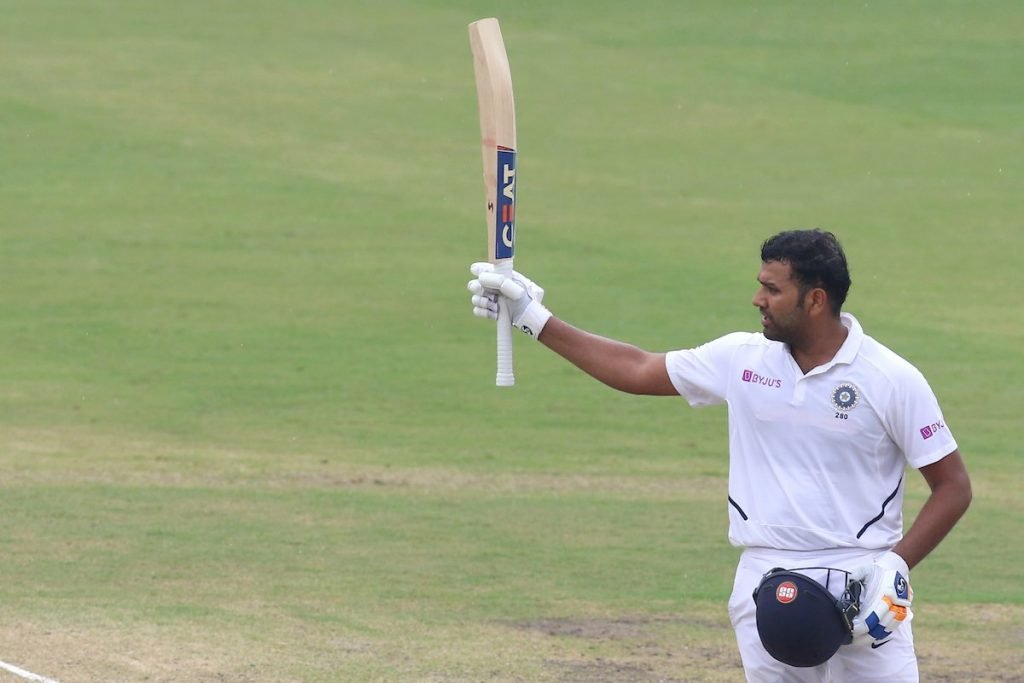 After being the lone person to not cross the fifty mark at Pune, Rohit would have surely been itching to go back at the crease and not repeat the same mistake again. On a Day One pitch at Ranchi in midst of a flaming Kagiso Rabada spell, the opener managed to withstand the tornado coming his way. With three wickets down, Rohit understood that the mantle to take India out of trouble was in his hands. He unleashed a counter attack on the bowlers after resisiting at the start. He continued to demonize the spinners by going after them and stepping out of his crease without any fear. He alongside Ajinkya Rahane helped India post a total of 497/9.

Just around 12 years ago at Chepauk, an Indian opener in red ball cricket was going out all guns blazing against the Proteas bowlers and registered the highest score by an Indian till date. This rendition of batting from Rohit Sharma provided a sense of Deja Vu for every cricket fan. The fact that he reached both the milestones, i.e. 100 and 200 with a maximum was a sublime example of his knack for big shots. Any Indian fan just couldn’t help reminiscing the Nawab of Najafgarh at this moment.

Rohit Sharma And His Record Mania 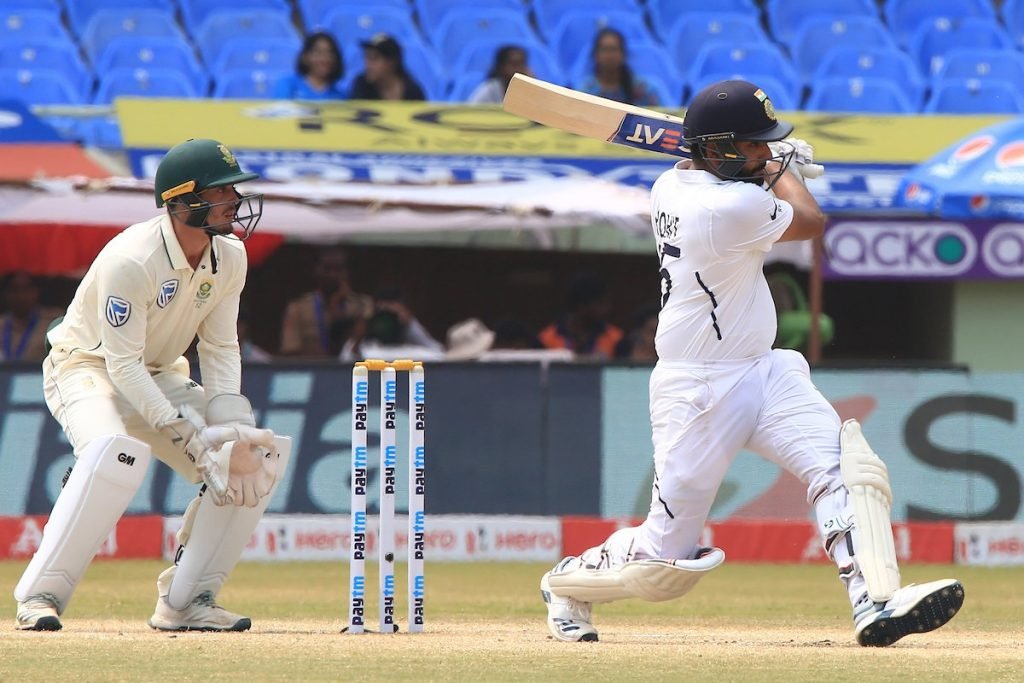 Rohit Sharma became the first ever Indian opener to score three tons in a series after Sunil Gavaskar. His current batting average at home – 99.87 is greater than that of Sir Don Bradman. His last nine scores in home tests are 82*, 51*, 102*, 65, 50*, 176, 127, 14 and 212. The 32-year old also became the first ever Indian cricketer to score a century as an opener in every format. Rohit managed to outscore the Proteas in both innings in Ranchi. It was his second Man of the Series award after winning the same in his debut Test series back in 2013.

Rohit Sharma smashed 19 sixes through the Test series, 13 of them in the first Test, which is also a world record for maximum sixes in a game. He also reached 50 sixes in Test cricket. His overall tally of sixes in international cricket is 392 which is the fourth highest overall. The opening pair of him and Mayank Agarwal went on register the highest first-wicket stand in India – South Africa Tests with a 317-run partnership, which was also the third highest for India overall. Currently, the talented batsman has nine hundreds to his name this year. He also stormed to the 10th position in the ICC test rankings for batsman.

Whenever he returned back to the dressing room playing a supreme knock, the captain was full of adulation and even gave him a pat on the back for his brilliance with the bat. With the World Test Championship going on, Rohit will know this is just the beginning and an opportunity to revive his test career. India have a big series to win and he is expected to be the guardian at the top order for the next couple of months. Following the home season, India have two overseas tours coming up in New Zealand and Australia, which is going to be a true test for his character as a batsman in the traditional format.

While he has aced the first hurdle of establishing himself as a Test opener with relative ease, this is going to be a marathon. He has missed out on a bunch of years and now suddenly, he may stand a chance to make a difference for India in the World Test Championship. For the first time in his career, Rohit has breaked into the Top 10 ICC rankings as a Test batsman. He has all the capability in the world to break the shackles and put the opposition bowlers under immense pressure. And Rohit Sharma has all the experience and potential to come out with flying colours.

“I would love to take singles and come to non-striker end, so that I can watch Rohit batting”. If such high praise comes from the skipper who is arguably the greatest cricketer of this generation, you know what it means.