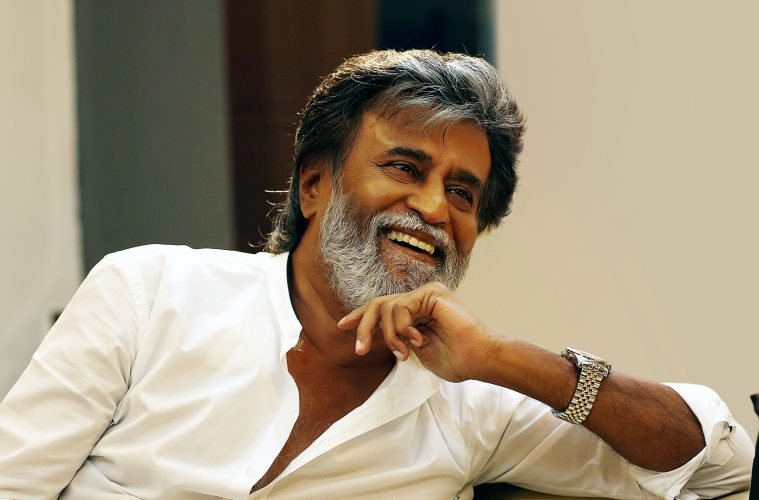 Will Tamil Nadu Finally Get A Father Figure In The Form Of Rajinikanth?

Tamil Nadu has always been the hot spot of fusion of cinema and politics. On New Year’s Eve, in the presence of thousands of fans, India’s biggest superstar Rajinikanth finally announced that he would be joining active politics, putting an end to the long awaited suspense.

Amidst the thunderous applause from his fans, the 67-year old superstar also declared that he would float a new political party that would contest in all 234 of Tamil Nadu’s Assembly constituencies in the next state elections.

Addressing a large crowd of fans at the Raghavendra Mandapam in Chennai on December 31st, the veteran actor said,

Politics has become very tainted. Democracy has become battered. The political climate in Tamil Nadu has made us hang our heads in shame. If I don’t act now, I will feel guilty that I didn’t act. 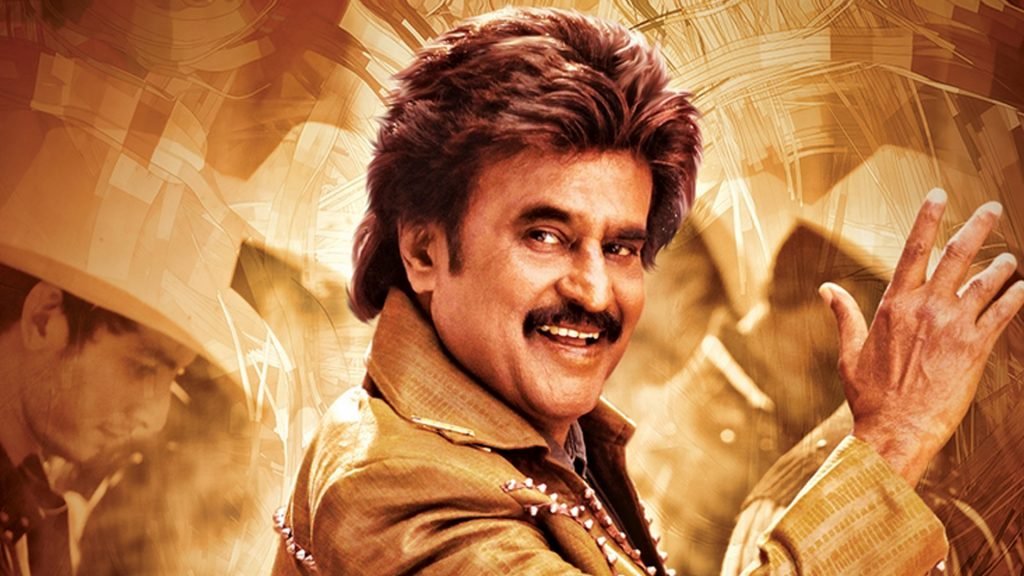 Thalaivar and his fan base

In Tamil Nadu, Rajinikanth has a devoted fan base and he enjoys a demi godly adulation. A day after announcing his entry into politics, he launched a website and an Android application called “Rajini Mandram”.

People can register as members so that he can bring together his fan following before officially launching his political party. His decision has evoked a mixed response from the public. Many believe that he had a better opportunity during the 90’s when he came out in support of the DMK-TMC alliance.

Tamil Nadu and the Dravidian Movement

However, if you look at the current political scenario of Tamil Nadu, after the demise of AIADMK’s J Jayalalitha and the declining health of the DMK leader M Karunanidhi, the state is lacking a leader. A public figure with a demi-god status like Rajinikanth has very good chance of rising to power and fill the political vacuum that is left behind.

Politics of Tamil Nadu has always been a little different compared to the rest of the country. It has given birth to some of the most remarkable social movements of independent India. 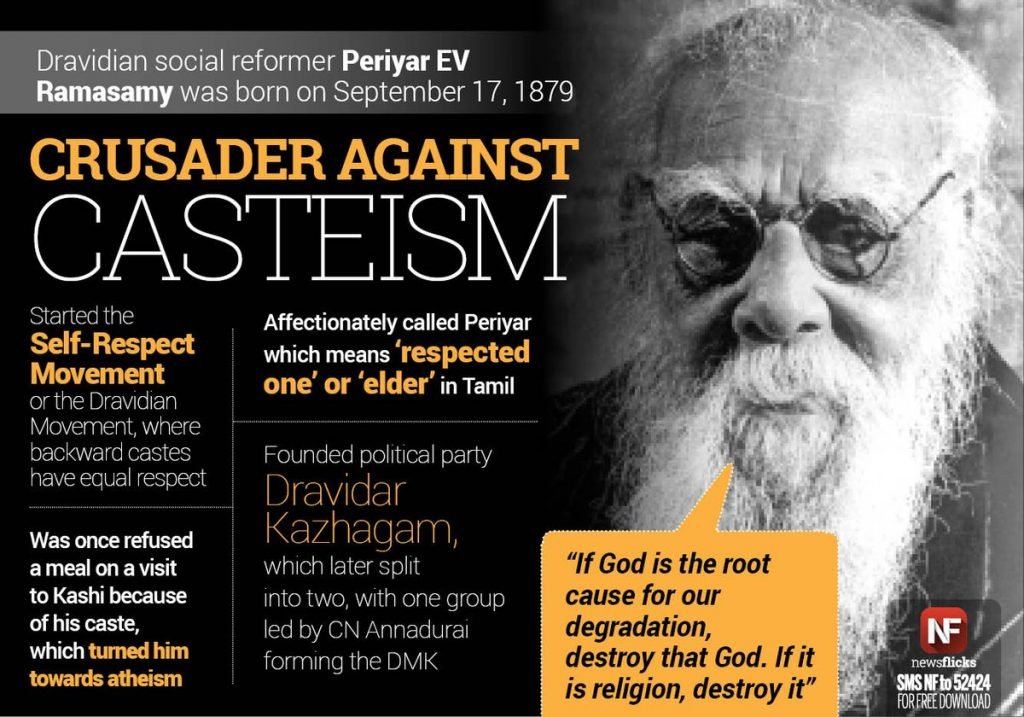 The Dravidian Movement, better known as the Self-Respect Movement, was a historic social welfare movement under the leadership of Periyar E. V. Ramasamy. It uprooted the Indian National Congress Government and in doing so, forever changed the political equation of the state as well as the country. The movement triggered the anti-Bramhin anti-Hindi Tamil Nationalism, rigorously converted caste politics into a practical community mobilization and formed the very base of contemporary Tamil politics.

Even former Chief Minister and AIADMK leader M. G. Ramachandran and his successor Jayalalitha never mentioned about spirituality or religion in state politics.

On the other hand, Rajinikanth started his speech with a quote from Bhagwat Geeta. A text that Ramasamy often accused of being the root of the caste system. Ramasamy also accused it for being the primary reason for Tamil being culturally subjugated by the Aryans. 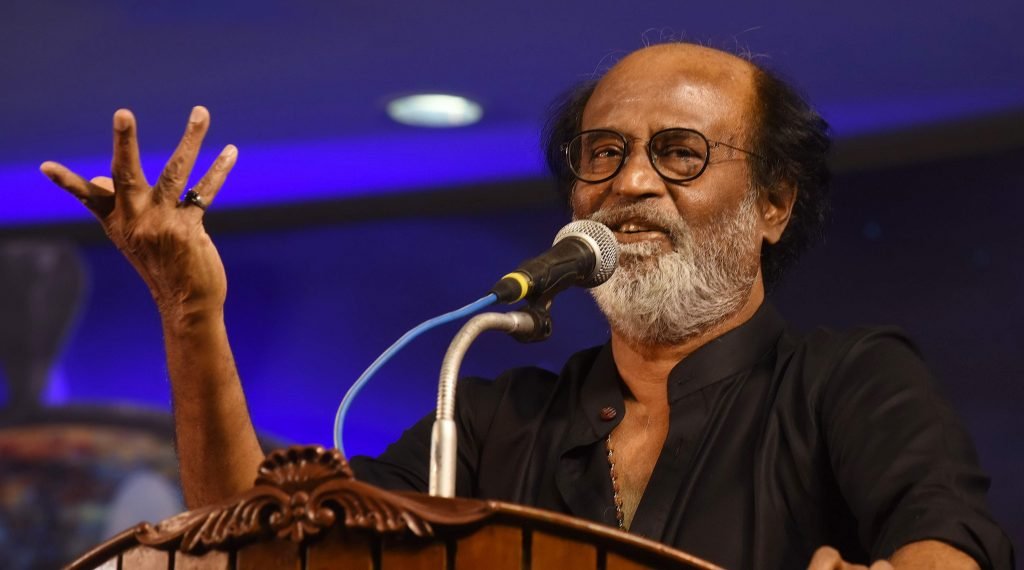 Rajini even coined the term ‘spiritual politics’ while addressing his followers. It not only turned the political landscape upside down but also hinted at a possible alliance with another party which claims to advocate spiritual politics.

He has a good rapport with all the politicians. His closeness with Narendra Modi, Amit Shah, Nitin Gadkari, Venkaiah Naidu is also well-known. BJP has welcomed his decision but denied any connection with it.

Tamil Nadu and its obsession with film stars

Politics does seem as a viable career option after retirement for film stars. However, there is something unique about Tamil Nadu’s fascination with personality cults and actors-turned-politicians.

It all began with MG Ramachandran, popularly known as MGR. The first movie star to become the Chief Minister of Tamil Nadu in the 1970s. Followed by his protégé and a co-star J Jayalalitha. 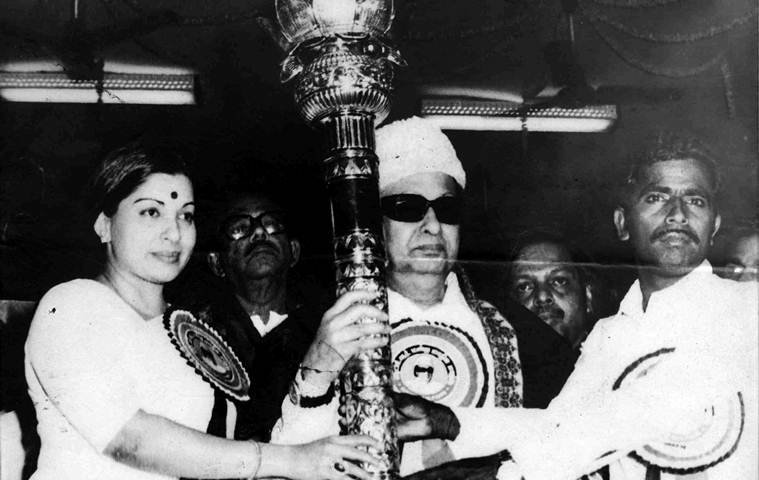 In between them, there were many other actor-turned–politicians who went on to play their roles in state politics. But success only came to them after a long period of struggle to gain a foothold in state politics.

Once worked as a government bus conductor in Bengaluru, Rajinikanth did not only set an example by entering the cinema but also shattered all of box-office records with his outstanding style and screen-presence and the larger-than-life characters he played.

Over his career which spanned four decades, he has appeared in over 150 films and garnered a huge following. He has been Asia’s second highest paid actor, arguably India’s biggest superstar and his fandom are beyond comprehension. Only time will tell how good he proves himself to be in converting his huge fan base into voters.

Over the last one year, another famous Tamil actor, Kamal Haasan has also thrown his hat into the ring.

If Kamal Haasan forms his political party, Tamil Nadu might get to witness the two giants of contemporary Tamil Cinema locking horns off-screen. 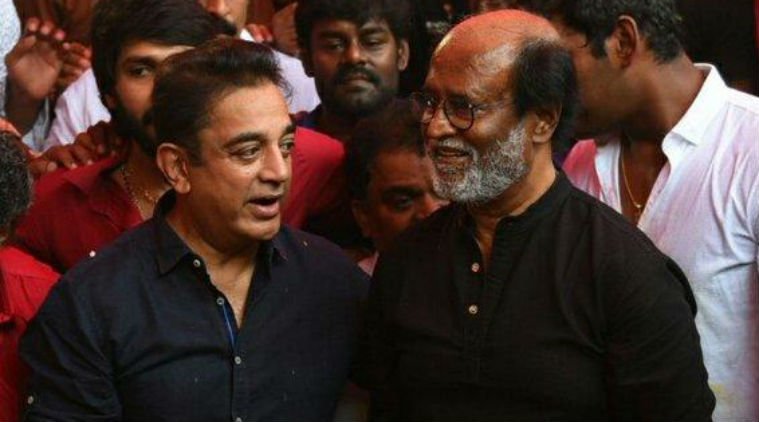 Moreover, Kamal Haasan congratulated and welcomed him, calling him a brother in a tweet the following day. Another popular Tamil actor Vishal Krishna has made his entry into politics.

In a state whose politics has always been intertwined with cinema, Rajinikanth in his new role can certainly pull off an ‘MGR’. With millions of followers, Rajinikanth entering politics will be a game-changer in the landscape of politics.

With one million hits and three lakh registrations in a day on his political website rajinimandram.org, there is no question about it.