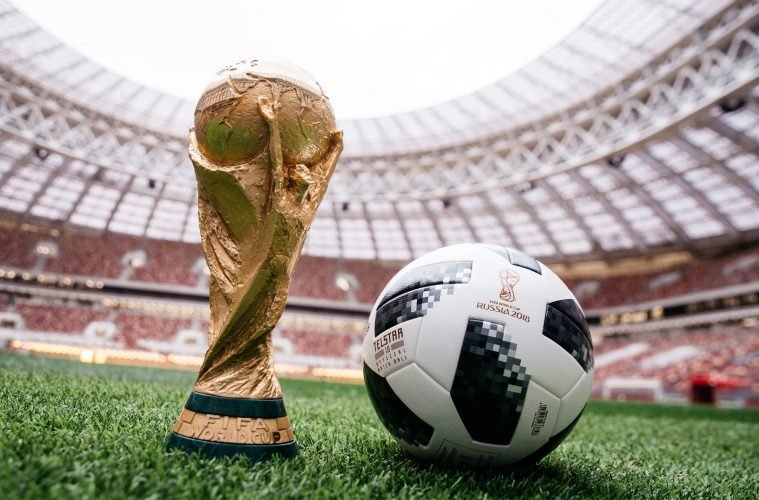 The Transformation of FIFA World Cup Balls Over The Years

“Adidas” – The name which comes to the mind of fans and players around the world when it is about major tournaments and FIFA World Cup. Being one of the greatest brands in sports, Adidas knows where to prioritize, football. For over 60 years, Adidas has led all major developments from boots, balls and apparel technologies in the sport. Which makes them a huge pillar in the game of football with their history of involvement in the game to this date and for the future.

Adidas builds their name and brand by partnering up with some of the biggest names in football by joining forces with players, clubs, national teams and major tournament events. Their partners include FIFA, UEFA, Spain, Germany, Lionel Messi, Real Madrid, Manchester United and other big names in the game.

The tie-up between Adidas and FIFA dates for more than 40 years. Ever since the 1970 FIFA World Cup by supplying the official match ball for all FIFA World Cup™ matches. It’s no myth that Adidas team of designers and developers been trying and crafting the best match balls for the occasion with their latest technologies and designs.

Among the Adidas line of legendary balls over the years, the standout ones were the Tango (1982), the first ball to successfully mix and blend leather and polyurethane, the Azteca (1986), the first fully synthetic ball, the Questra (1994), the polyurethane foam-based ball, the Tricolore (1998) which introduced a syntactic foam layer and the +Teamgeist (2006) that has set new standards with its innovative and highly iconic design and panel-technology for the world stage. 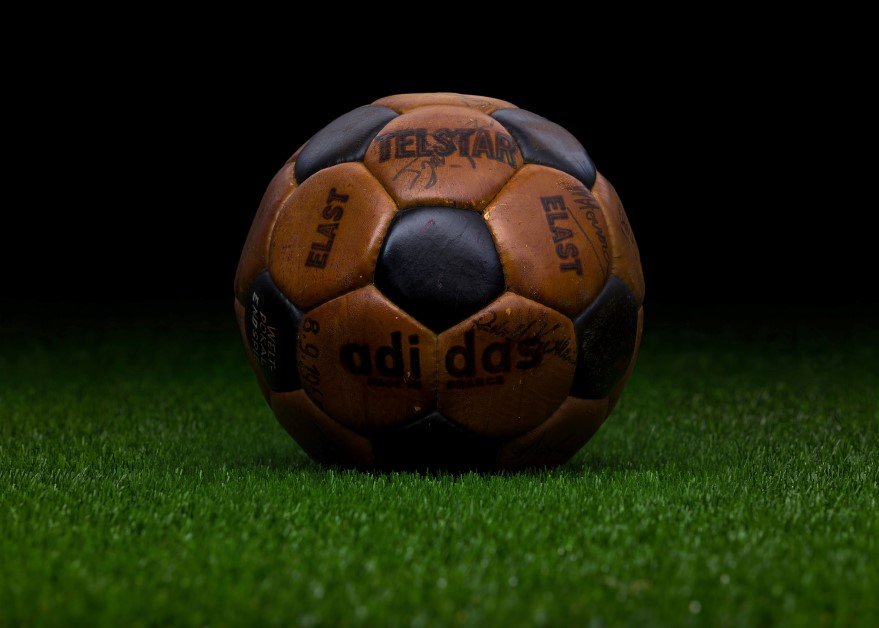 The arrival of Adidas, who FIFA decided to give the job with designing the ball for the tournament in Mexico following the success they had with designing for the European Cup in 1968 and also the Olympic Games, also in Mexico.

Adidas created the Telstar, which – with its black-and-white panels to improve the visibility of the ball on television at the first World Cup which was to be broadcast worldwide. Even though the design was around for some time in few European countries. 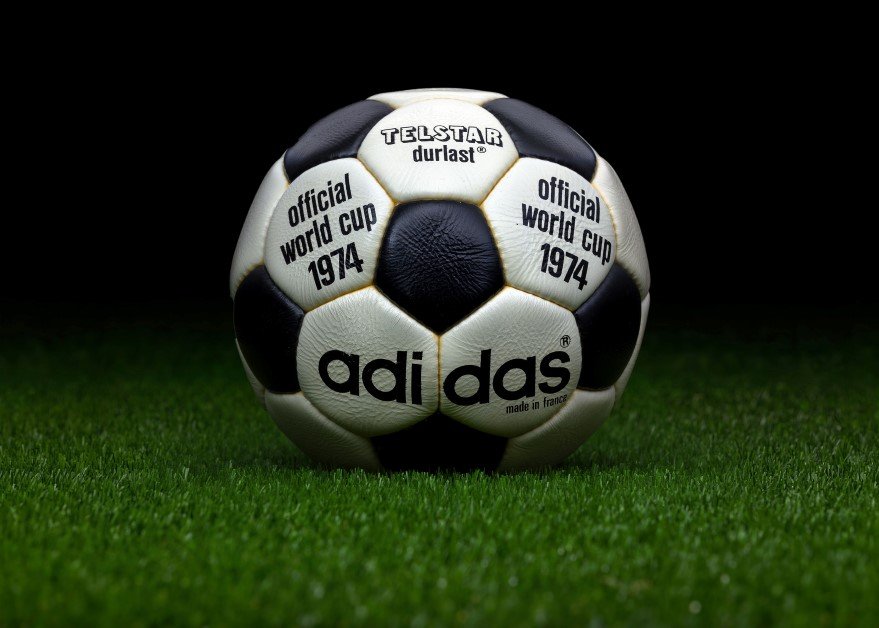 Since the ’70 Telstar was a solid hit, Adidas didn’t really make any changes to it but altered and tweaked a bit and for the ’74 World Cup in West Germany.

Adidas renamed it to ‘Telstar Durlast’, but the ‘Durlast’ part had been present on the 1970 ball. This refers to the coating the ball was given to protect the leather and how it could withstand the wet weather and pitch conditions.

It was also a big step-up for Adidas as they established themselves as official partners of FIFA and were allowed to brand their name “Adidas” to it as well. 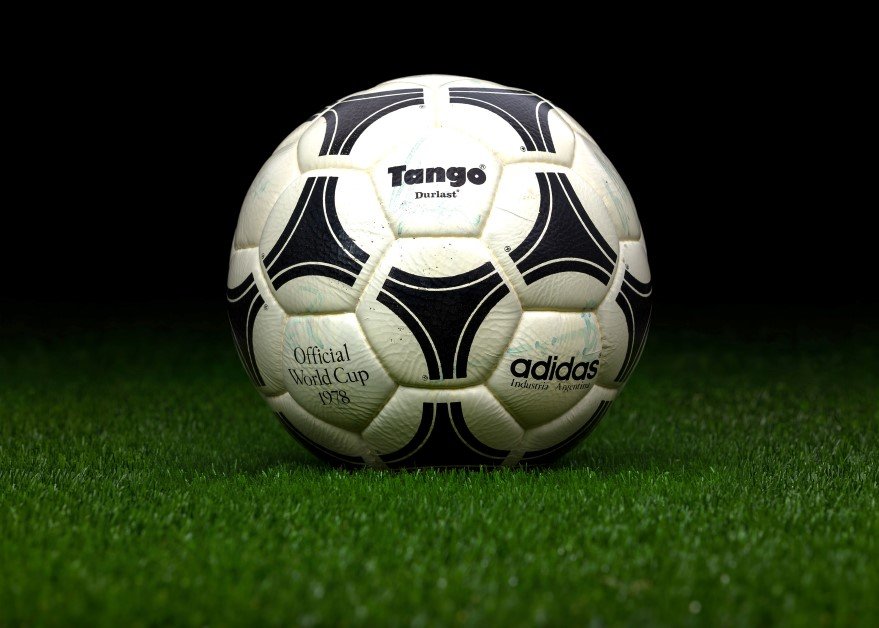 In ’78, Adidas came up with the Tango – named after the famous dance of hosts Argentina.

Tango turned out to be one of the most popular balls ever made and to be played. Even though Adidas had backup plans with ’78 edition Telstar, they never really needed it. Because Tango took off to greatness after the introduction – all-white base with black triangles arranged in a circular pattern, creating a visual treat when the ball rolled across the green pitch. It was revolutionary.

Selling huge numbers and eventually categorised as one of the most recognisable balls in the world.

Tango also marked the beginning of the end for the leather ball. One of the most iconic balls to be made by Adidas went on to big fame for the years to come. 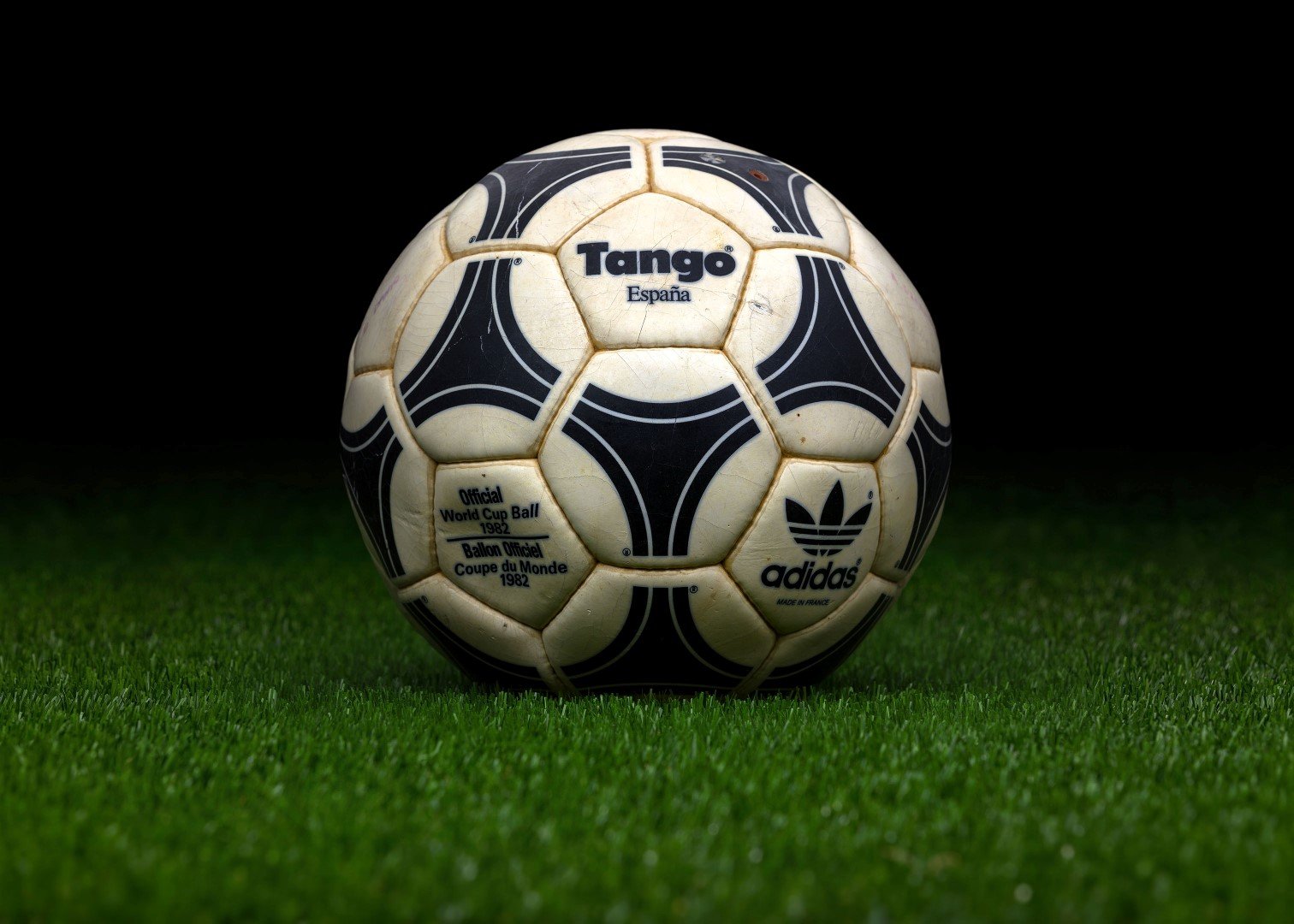 Adidas didn’t risk much to make changes to their Tango ’78 edition and came up with Tango Espana.

But they did design and develop the ball in a more advanced technology by making it last more in the wet conditions and rough surfaces which in-turn increased the durability of the ball. By taking off the Duralast feature, they were sewed and waxed to perfection. 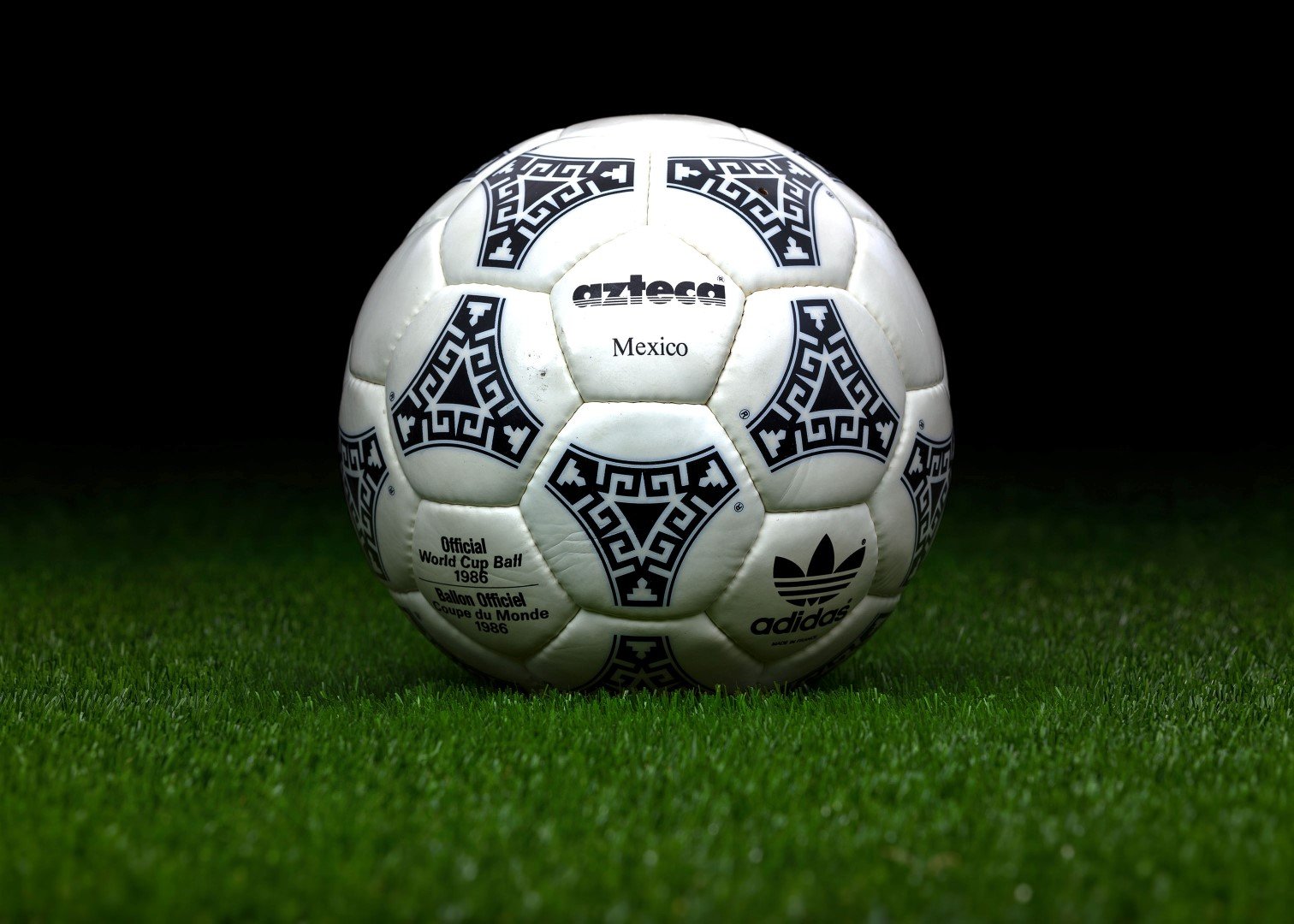 Adidas’ Azteca was the first synthetic ball to be used at a World Cup.

Azteca’s synthetic advantage would turn out to be the ball getting back into its original shape after kicking or putting some sort of pressure on it, unlike the previous versions.

Adidas also came up with a better water-resistance and durability with their ’86 version World Cup ball. Hence it marked a crucial signature for the World Cups to come with the synthetic approach.

Adidas designed the ball based on the Mexican inspiration from the patterns of triangles was inspired by Aztec architecture and murals. This particular tradition would continue for every tournament to come. 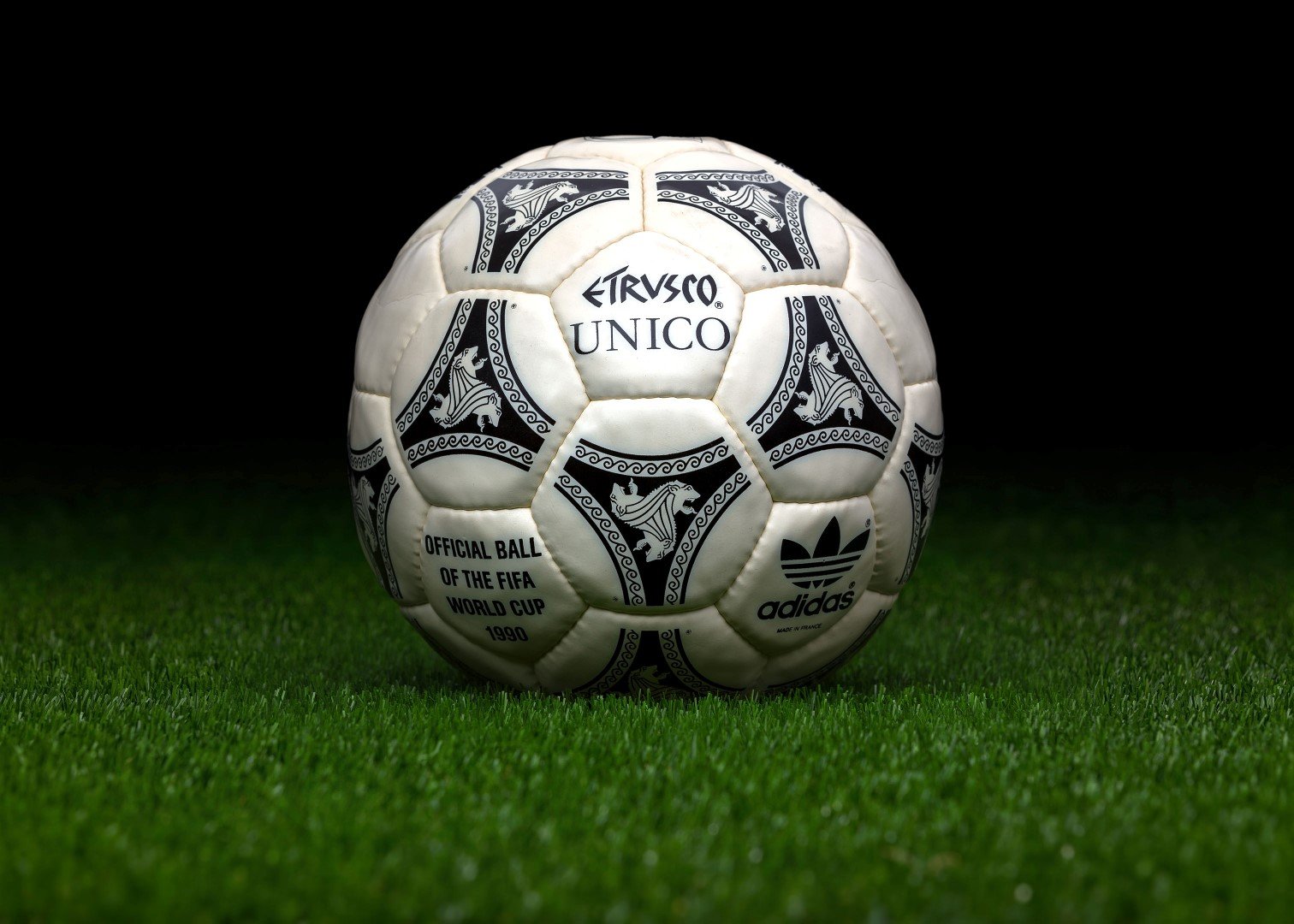 The Tango lookalike triangles were still present with the heads of Etruscan lions between the lines. It was a fine art by Adidas and yeah, they continued with the synthetic traditions.

For two decades Adidas came up with similar designs and tech apart from switching from the leather to synthetic, there weren’t many changes to the ball designed for the World Cups. 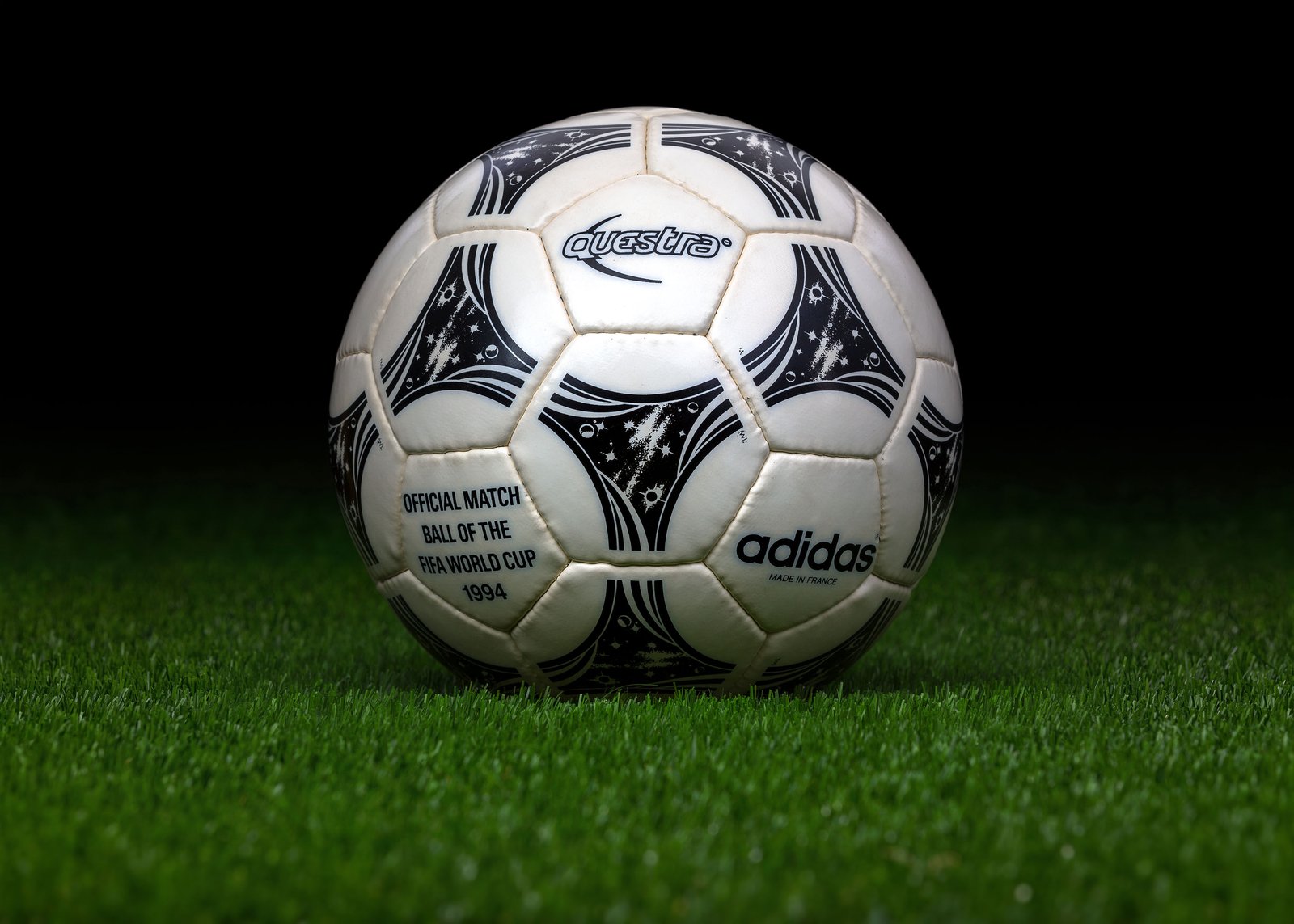 Italy 1990 turned out to be a dull World Cup in general. So Adidas and FIFA decided to heat things up with their new ball, Questra. The United States of America were given the chance to host their first World Cup.

The result? A high scoring wild World Cup campaign for all the National Teams and fans around the world.

Only 3 of 16 kept a clean-sheet in the first knockout round. The three matches which kept 0-0 scoreline included the final. Questra made the 1994 WC as the highest-scoring World Cup since 1982 and featured some incredible strikes and goals. 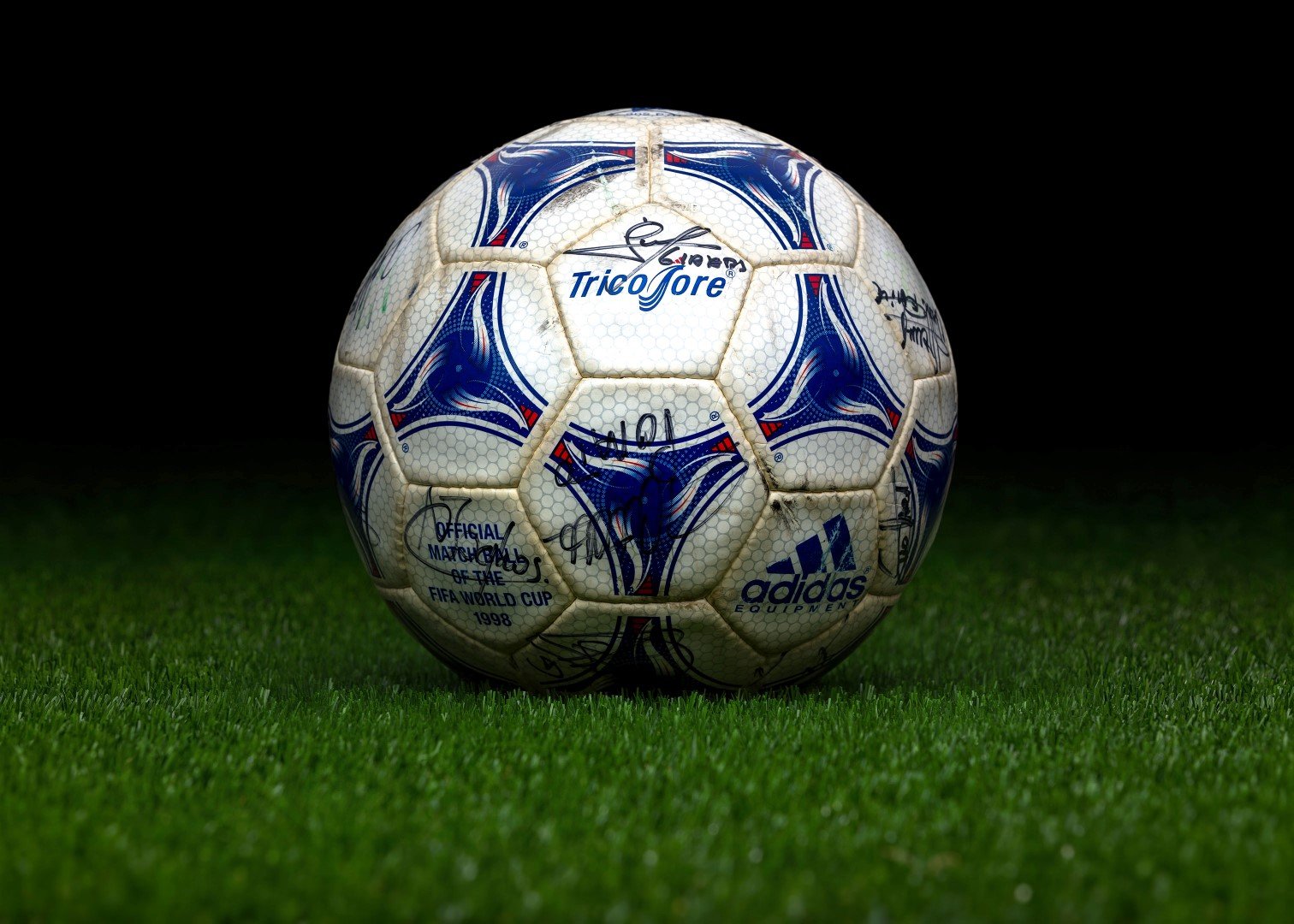 The Adidas Tricolore, designed for France 98, was the first ball to take on a multi-coloured design for the first time in history even though the World Cup was broadcasted in colours back in 1970.

Tricolore, as the name suggests, had three colours in the mix taking inspiration from the French National flag. It had similar tech to the 1994 edition with the foam layer.

But the intro of colours made a huge impact for the balls to be designed for the upcoming years. It was a kick-start for Adidas. 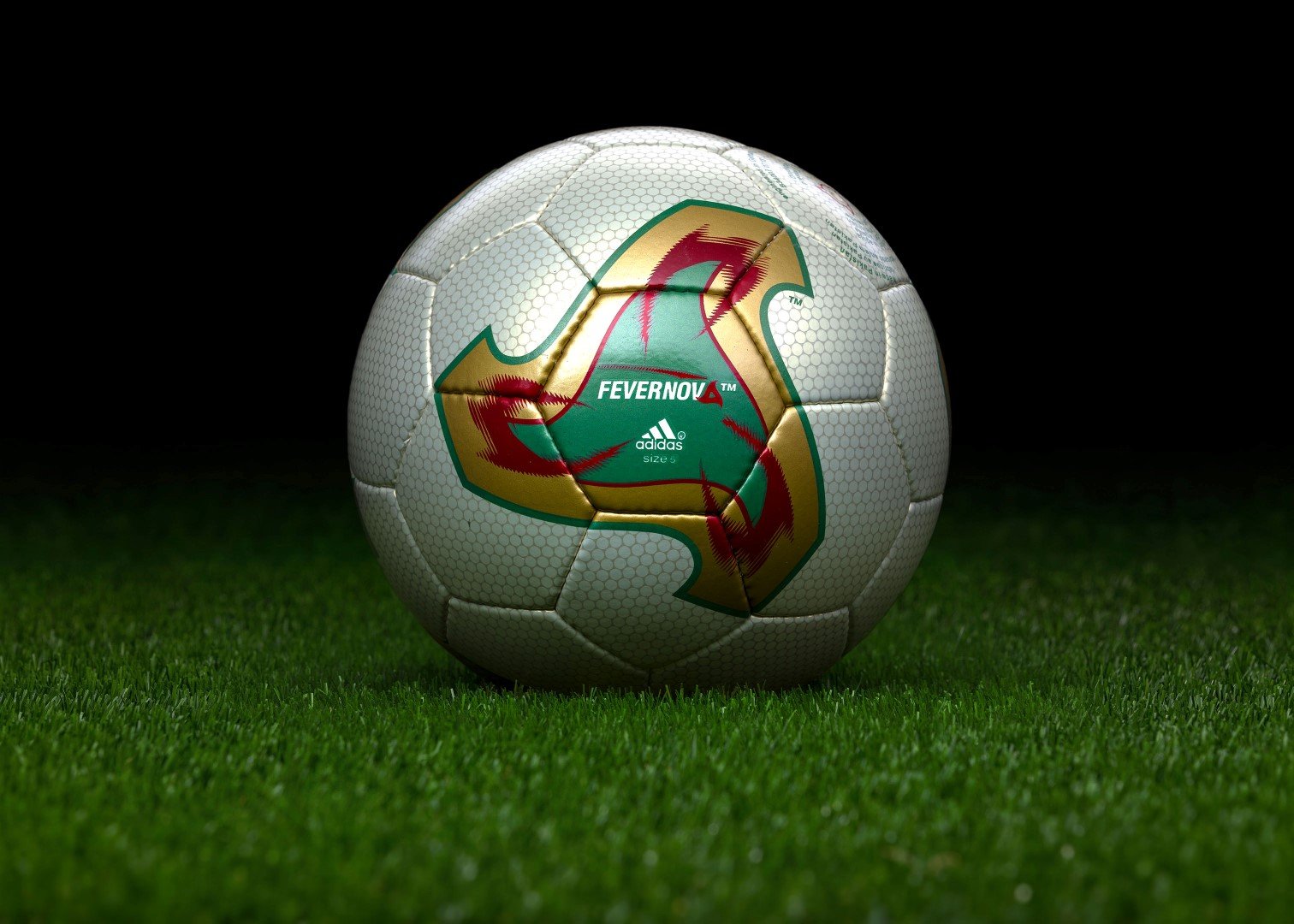 With the introduction of colours with Tricolore, Adidas continued with the colours. This time inspiration came from their legendary Tango with a blank ball that was given larger green, gold and red triangular colour combo.

Tech changed as well. Adidas made the ball more light and soft compared to previous versions according to the players.

David Beckham, who was the ambassador of Adidas at that time claimed the ball to be the best to manufacture to the date. Whereas, Gianluigi Buffon referred to it as a “crazy bouncing ball”.

It was a mixed reaction. But you would expect the GK’s to make a fuss about it because they aren’t given enough time to get used to the ball before the World Cup. They sure suffer a lot in 4 years gap. And the trend still exists to this date. 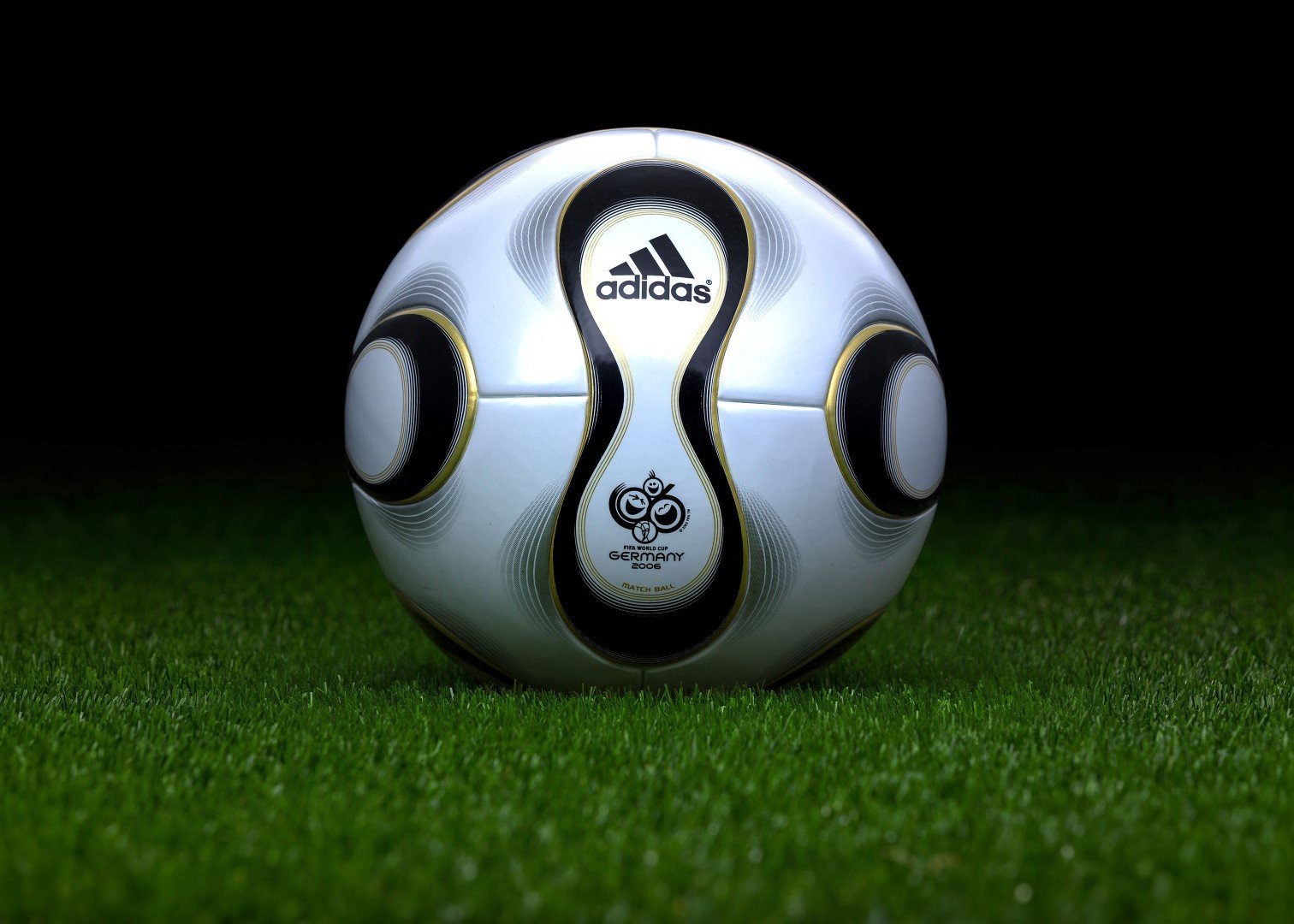 Germany hosted the 2006 World Cup, home of Adidas. They made sure it should be special for their hometown. Teamgeist means team spirit.

FIFA said: “Thanks to a revolutionary 14-panel ball configuration, players were able to show their true skills, as the quality and performance characteristics were identical every time they kicked the ball.”

But it wasn’t perfect. Teamgeist underwent thorough scientific testing by the Sports Technology Research Group of the University of Loughborough and resulted to be “so round and consistent” compared to other competitive match balls.

In that campaign, there were some outstanding goals one of them came from Germany’s own Philipp Lahm. Then there were talks about the ball being unpredictable when airborne with dip and swerve on the ball.

Adidas produced a custom ball for each every match of the tournament and also introduced a special gold version of Teamgeist – the ‘Teamgeist Berlin’ – for the final. 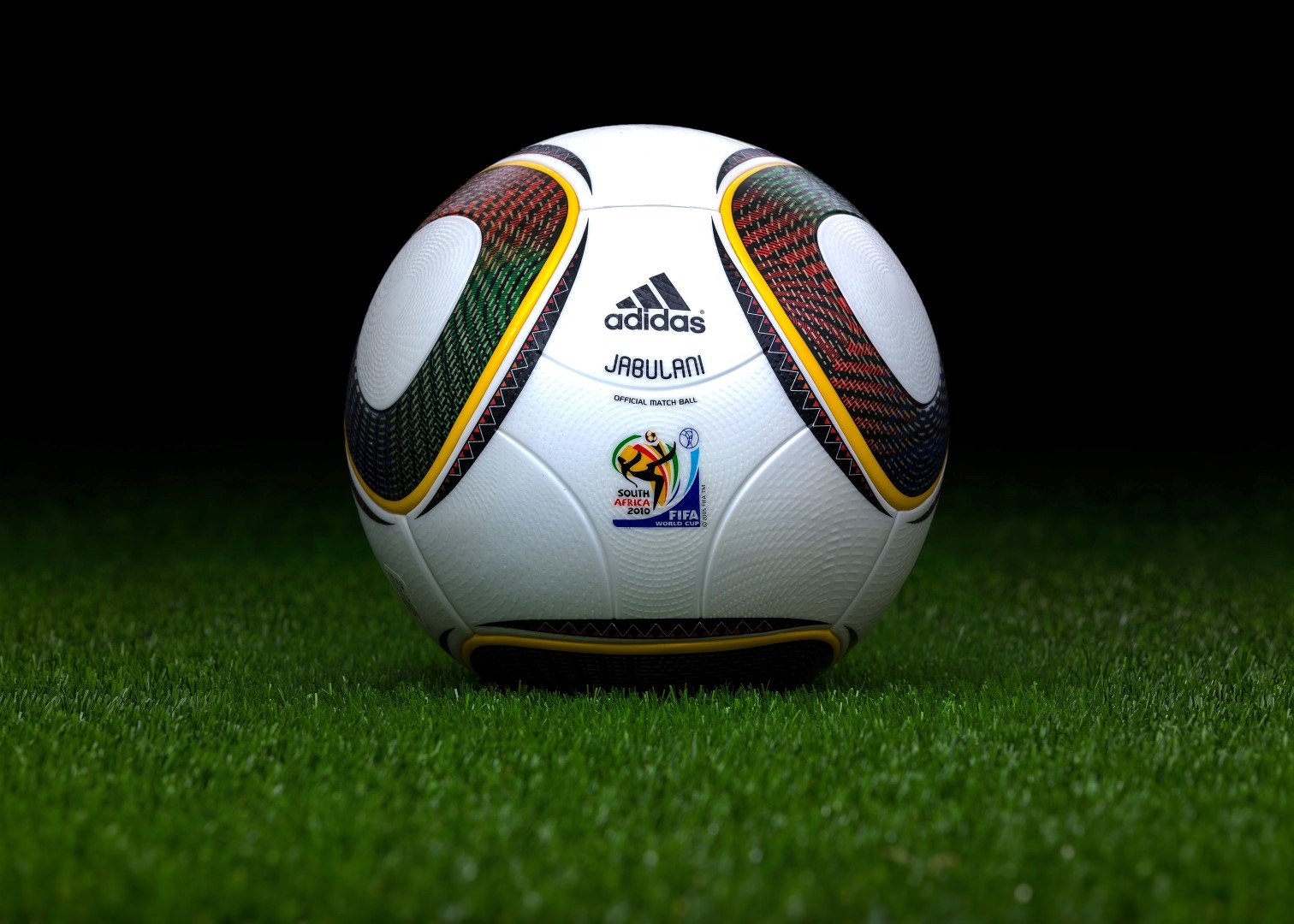 The Jabulani means ‘to celebrate’ in Zulu but this particular edition of World Cup faced heavy criticism from players and media.

Adidas attempted to craft a ball that was r, under than ever by decreasing the number of panels 14 to just 8 compared to Teamgeist which would make the ball more rounder and consistent.

Brazilian keeper Julio Cesar compared Jabulani to cheap fake products which you would buy from supermarkets and Spain’s Iker Casillas called it “horrible”. It even affected the passing abilities of players and not to mention the shooting capabilities.

Buffon said: ‘The new model is absolutely inadequate and I think it’s shameful letting play such an important competition, where a lot of champions take part, with a ball like this.’

NASA even did a  study to get to the bottom of the issue. They discovered that the Jabulani started to move in the air at a higher speed than previous balls because of its smoother surface with fewer seams. Which resulted in more floating in the air. 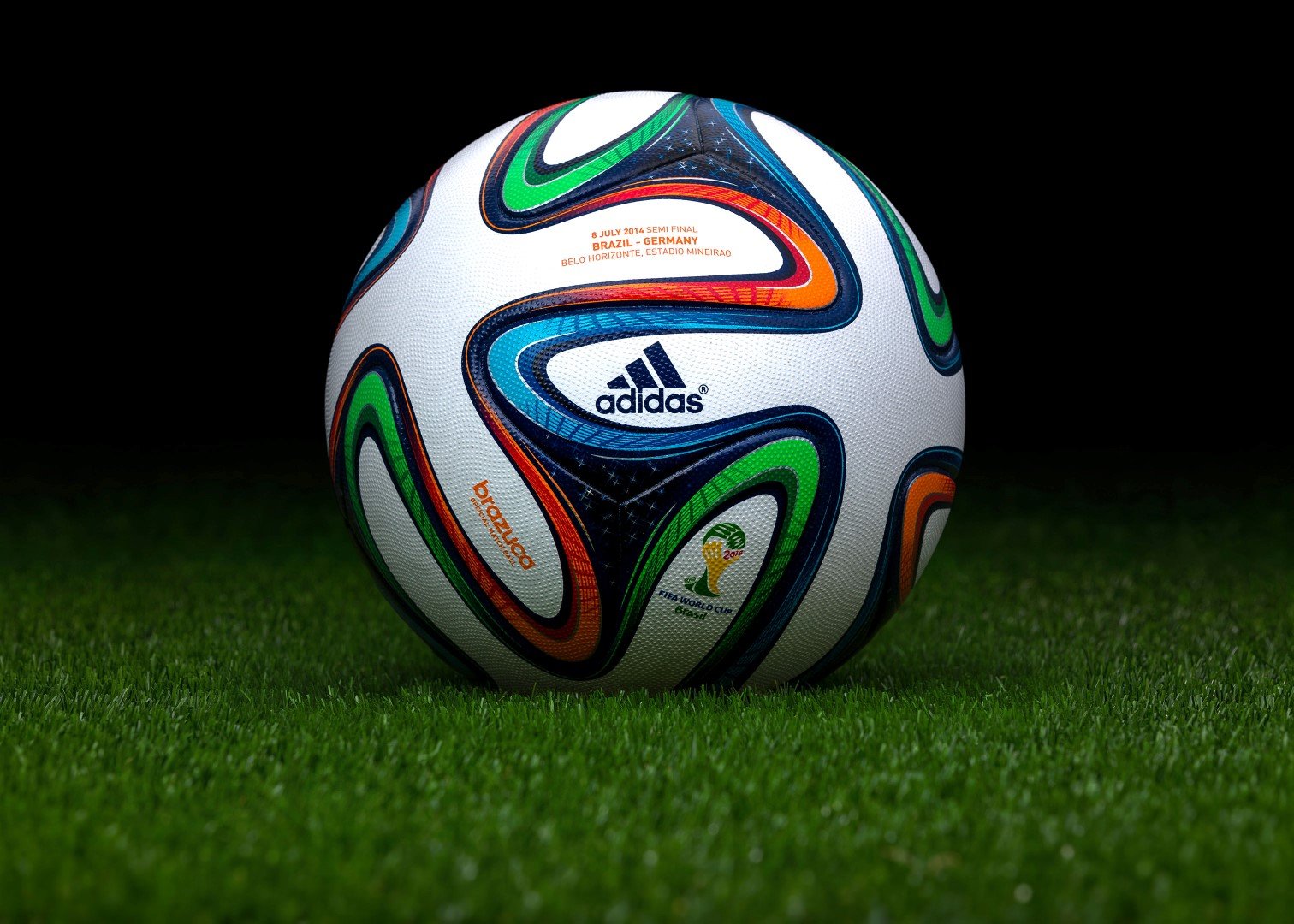 After facing heaving criticism and controversies for Jabulani, Adidas released their most-tested ball ever – The Brazuca, a slang word for ‘Brazilian’ which, according to FIFA, explains “national pride in the Brazilian way of life”.

Adidas reduced the panels from Jabulani’s 8 to 6. Which in the paper would have messed up the ball even more. But it didn’t face much criticism like Jabulani. Because after undergoing extensive dynamic lab tests Adidas went onto players to get their feedback (most important) before the World Cup even started and even made it available for certain club level fixtures as well. Was widely used in MLS and Bundesliga as well. 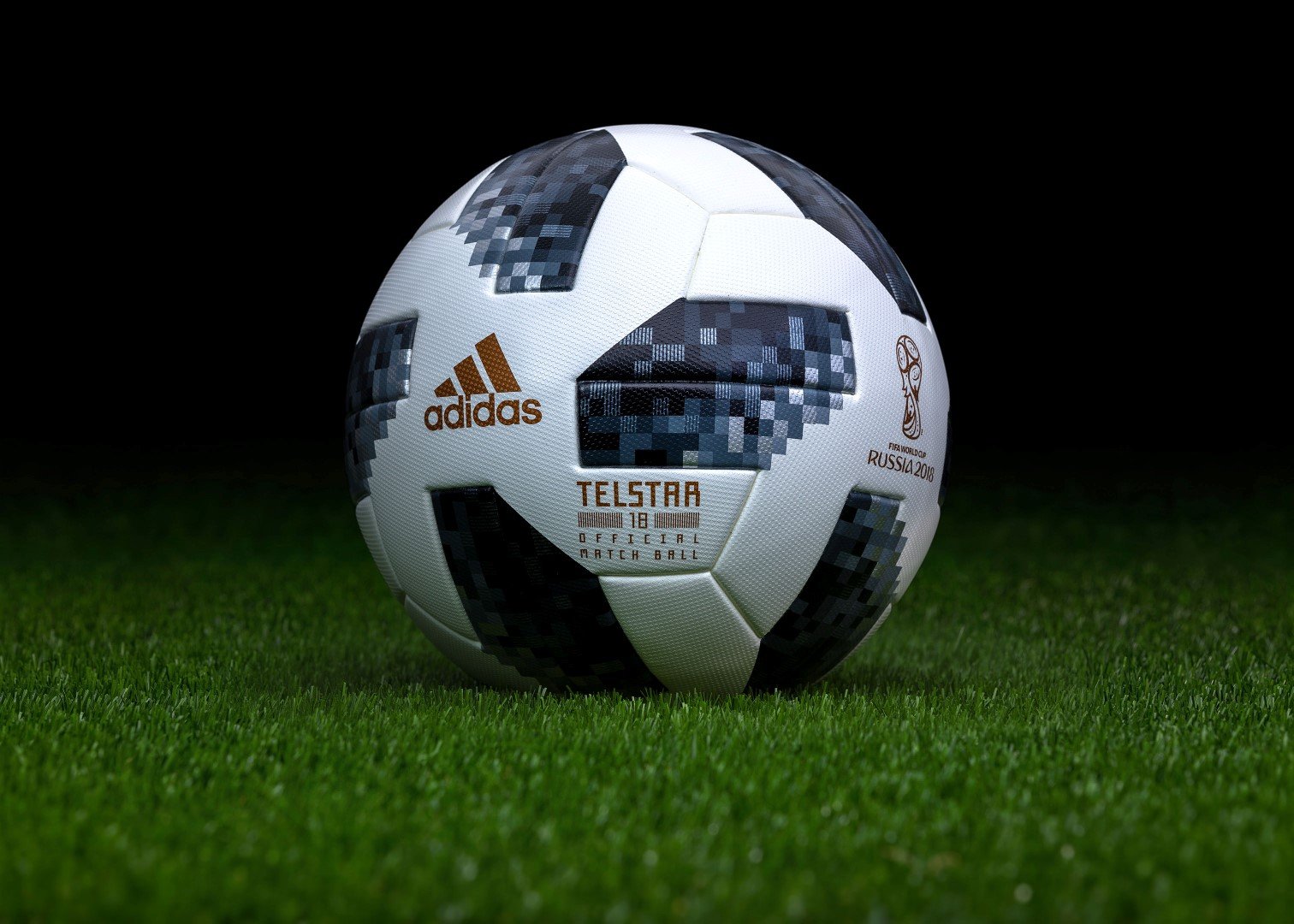 A few months back in November, Adidas released their 2018 edition Telstar for Russia. It was inspired and based on their legendary 1970 Telstar.

Telstar also was the first ball to go back to the roots with black and white colour combo after two decades of playing with colours.

Gold is the only colour on the Telstar 18 edition, Telstar and World Cup logos printed on the white surface of the ball.

Similar to Brazuca, the Telstar 18 edition has just 6 panels but they are arranged in a completely new pattern and give would give the visual effect of the vintage 1970 edition ball.

So far the ball has delivered some monstrous and beautiful goals. Also proving to be one of the best creation by Adidas living up to the original Telstar name and fame.