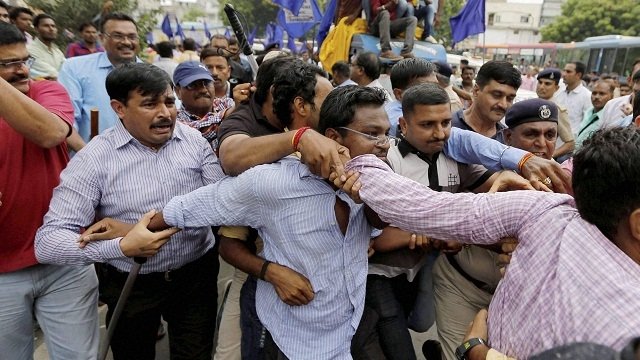 The Unrest In Gujarat Is Yet Another Incident Of Politicising Rape Of A Child?

Cases of rape evoke anger across the country. Every one wishes nothing but to see the guilty punished for their heinous acts. However, of-late a section of political class considers such unfortunate incidents as opportunities to score some political points. They take this up as an opportunity and fuel the unrest. In the aftermath of the Kathua incident, one particular religion faced shaming for the alleged actions of a few people belonging to that community. A similar thing has come out in the present Gujarat unrest. Here emotions are are in the playground for reaping political dividends.

The Incident In Gujarat

The violence against people from Northern Indians began in Gujarat after the rape of a 14-months-old girl allegedly by a migrant worker. The incident took place on September 28 in the Sabarkantha district of Gujarat. The police soon arrested the Bihari migrant worker accused of the crime. But the heinous offence led to rage among a section of people. Small mobs planned attacking unrelated migrant workers. It seems that this involved alleged members of Thakor Sena. A demonstration that was held in the Meghaninagar area saw members of the Thakor community demanding action against the outsiders.

Soon incidents of violence errupted in Mehsana, Sabarkantha, Aravali, and few other districts. People from Bihar, Uttar Pradesh, Rajasthan, and Madhya Pradesh work in GIDC and other areas across Gujarat. The President of Uttar Bharatiya Vikas Parishad told Ahmedabad Mirror that so-far 50,000 labourers had left the state fearing violence. He added that 70% of workers from Mehsana GIDC had left and may not return before three months.

The Police have registered 42 cases and arrested 342 people in connection with the violence. 17 companies of State Reserve Police were on duty in the affected areas. DGP Jha has also ordered cyber cell to stay vigilant to prevent the spreading of hateful messages. Industrial units in some of the affected areas have also been provided with additional security. So, how did one criminal act lead to mass violence against all individuals from a specific region?

Gujarat has been one of the most accommodating states in the country. This is even with the Parsis becoming a part of it like ‘sugar in milk.’ The state has never seen local vs outsider riots, even the Hindu-Muslim riots post-2002. So, why the sudden escalation ensuring complete lawlessness and hatred towards outsiders? A speech by Congress MLA Alpesh Thakor has surfaced, where he is seen stoking the flames of ‘Gujarati vs non-Gujarati’ divide. He goes on the say that Gujaratis are dying due to starvation, whereas outsiders are getting jobs.

In his divisive speech, Alpesh Thakor also demands 55% reservation in jobs for the people of the state. He asks the people whether they want jobs and is it not that their right to get jobs in Maruti and other companies. Later in clarification byte, he urged everyone to protest peacefully. However, in a video that emerged a man identified as MV Thakor is seen issuing a warning and asking poor migrant workers to leave or face the ire, as reported by DeshGujarat. While Alpesh Thakor and his men could be behind this violence, it is worth noting that Alpesh Thakor is the Congress general secretary in-charge of Bihar. Ironic!