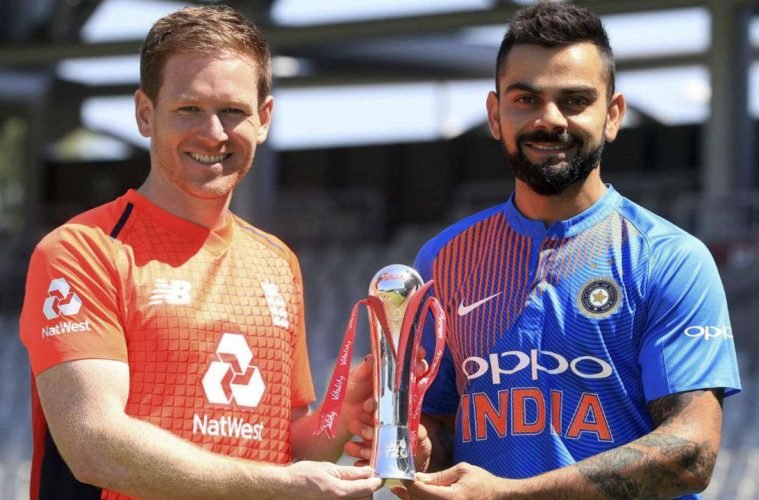 The Men in Blue recorded their first T20I series victory against England in England. All the three games won were by teams chasing, which portrayed the advantage of batting second. In the first two games, the pitch had something for the bowlers. However, the Bristol track was absolutely flat and the short boundaries ensured it was a high scoring encounter. A closely fought series has lifted expectations of the fans for the rest of the tour. Here we go through various take-downs from the series for both India and England.

In both the games India won, either of KL Rahul and Rohit Sharma took the initiative of staying till the end. If KL Rahul’s century in the first game was anything below magnificent, then you had run out of words to describe Rohit Sharma’s onslaught in the final game. Shikhar Dhawan had a forgettable series scoring just 19 runs. The only game where the top 3 failed, India lost out on a relatively close margin.

Skipper Virat Kohli sacrificed his No.3 spot in the batting order to initiate KL Rahul in the playing XI. However, this didn’t have any effect in his batting. He was quite fluent with the run scoring though he couldn’t score a half century. Suresh Raina got the lone chance in the second game where the top order collapsed. While he seemed to be in some fantastic form, Raina got out just when he was looking to accelerate.

The finishing conundrum comprising of MS Dhoni and Hardik Pandya was brilliant. While Dhoni’s 32(24)* in the second game ensured India had something to defend, Pandya’s 33(14)* yesterday displayed his pinch hitting finesse. However, that wasn’t the only aspect that was noteworthy. Both being multi dimensional players also stood up in their other departments. Dhoni had five catches, all in one game alongside two lightening stumpings. Pandya who has improved significantly as a bowler ended up with the most wickets in the series with six scalps.

In the absence of Bumrah, Bhuvneshwar Kumar was expected to lead the bowling attack. He had a bad day in the first game as he went wicketless and conceded 45 runs. Coming back strongly in the second game, he began with figures of 3-0-7-1. With 12 required off the last over, he ended up bowling length balls as England won. Umesh Yadav was India’s best pacer in the series for the first two games. However, he was taken away to the cleaners in the third game though the short boundaries was another reason. Siddharth Kaul looked good with a couple of wickets while Deepak Chahar didn’t have a great debut.

The wrist spinners did the trick for India again. Kuldeep Yadav outfoxed the English batting lineup with a five wicket haul in the first game. While Yuzvendra Chahal got just one wicket in the series, his economy rate of 7.67 was decent. The fielding was quite topsy turvy for India. While we witnessed some brilliant catches and stops, there were also a share of dropped catches and missed chances.

As for England, both Jos Buttler and Jason Roy did a stupendous job at the top order. Two fifty run opening partnerships between them. Buttler made his mark with an innings of 69(46) in the first match. Roy bettered it with a fascinating 67(31) in the final game. Alex Hales was also brilliant in the lower order. His 58(41)* in the second game helped the hosts secure a win in what was a last over thriller.

The biggest drawback for England this series was their middle order. Skipper Eoin Morgan didn’t have a memorable series. Joe Root had a horrible outing with scores of 0 and 9. He was dropped from the third game to accommodate Ben Stokes. Stokes was good in the lone game with both the bat and ball. While Jonny Bairstow began with a golden duck, he played some brilliant cameos in the last two games. The only saving grace for the hosts in the lower order.

While David Willey was phenomenal with his bowling in the first two games, the short boundaries at Bristol meant he was hit all over the park. Liam Plunkett had one good game. Jake Ball who picked up a couple of wickets in the series conceded at an economy rate of 11.86 in the series. Off spinner Moeen Ali conceded 37 runs in 2.2 over in the lone game he played. Indians have always been good players of spin so it wasn’t a surprise. The Indian batsmen dealt with Adil Rashid cautiously. Taking two wickets, he bowled at an overall economy rate of 7.17 which was the best in this series.

India lost just 10 wickets in the whole series as compared to England’s 22 which sums up the difference between both teams. While the ODIs are different, both teams are now aware of the possible threat by each other. England would be hoping their middle order to fire and the bowlers to be more consistent. As for the visitors, they would try to stay less dependent on the top order and expect pacers to take early wickets.