To The Godfather And The Living Legend Al Pacino!

With a grand career spanning over 5 decades, “intense” is the best word to describe this man. Intensity is what the critics and the audience loved when they saw Micheal Corleone in 1972. Intensity in performances has been this man’s forte and how. Al Pacino is an alumnus of the prestigious Actors Studio. Al was actively interested in acting from a very young age. As a teenager he was a part of many theatre performances. His love for Shakespeare and the urge to star in enactments of Shakespeare’s plays pitched him as an actor with a difference.

Knowing about Al Pacino’s life will turn anyone’s ambitions raw. A child born in a not so economically thriving family, Al’s parents separated when he was a mere two year old. Everything about his life was the opposite of idealistic. A school drop-out, a trouble maker, a substance abuser, being in bad company: this boy had a very unflattering future ahead of him. But if anything was to go right for him, he was drawn to performing arts.

We are thankful that this man did everything in his capacty to become an actor and kept getting better and better with each of the performances he came out with.

On the legend’s 78th birthday, here are some of the best performances carved out by him. 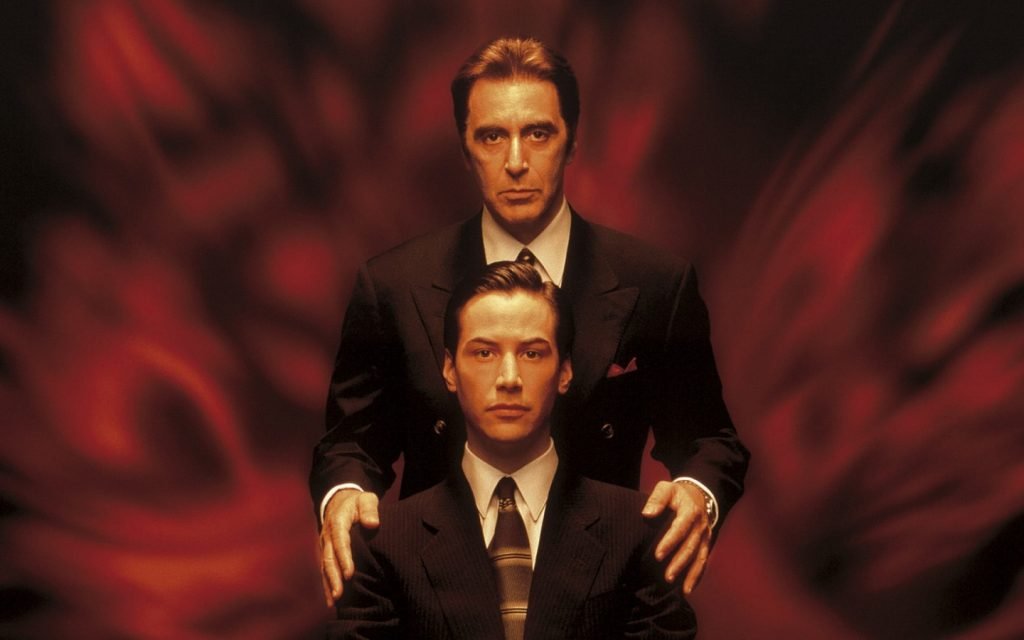 The enticing thriller has Al playing John Milton, a big time attorney who recruits a hot-shot lawyer (played by Keanu Reeves). The actor as always sucks the audience in with his enamoring performance, but there is a twist. Milton is the Satan himself. If anyone has enjoyed being evil, it is Pacino as Satan in this movie. He seems to relish all that is bad and evil and snowball it into something larger than life. And we love it!

Pacino surprised his fans by this toned down performance of a rusty mafia middleman, Lefty, who is at the end of his crime career. Even though this was not a vivacious and screaming at the top-of-the-lungs kind of performance, Al’s is an amazing supporting character to the protagonist Donnie (played by Johnny Depp).

This is a beautifully executed and touching performance by Pacino, as we feel the bond the two characters form. Lefty leaves us teary eyed in the end while we sit there rooting for the guy to be alive. 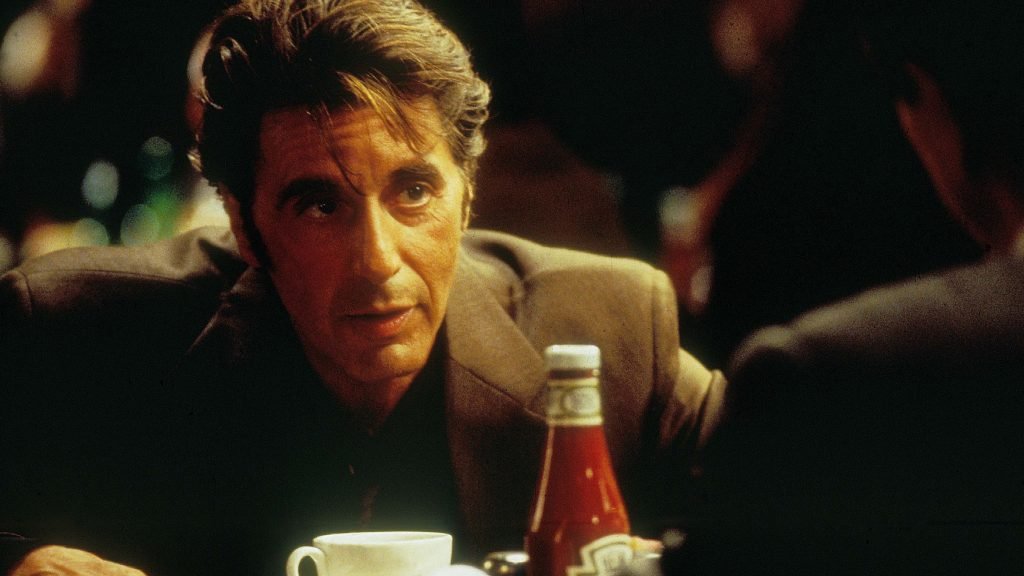 Pacino is this unhinged chaotic cop as opposed to De Nero’s cautious gangster in this one. Whenever we think of Heat, we just cannot not think of Al’s “I LIKE BIG ASSES!!!” scene. Pacino has definitely gone big with this performance and that intensity that he once again brings with him; that’s not funny at all. The man is pure insanity and has a presence in this one. 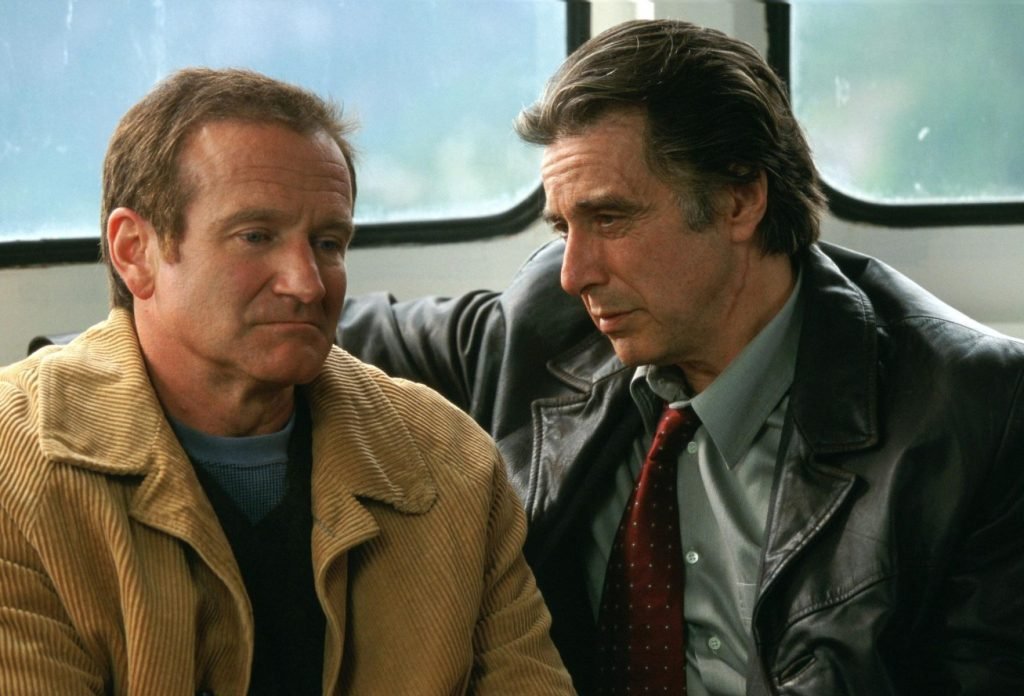 The fact that Al Pacino was casted in this movie made what this movie became as the studio debut for Christopher Nolan. No one else could have pulled the weariness and expertise of an LA cop investigating a case in Alaska. All this while he is tormented by an investigated going on on him by the internal affairs.

Pacino’s Will Dormer is enhanced by a worthy co-star Robin Williams, playing the cold-blooded murderer, Walter Finch. Even though this movie does not have that “Pacino” element, Al pulls a very convincing old style Hollywood with this performance. 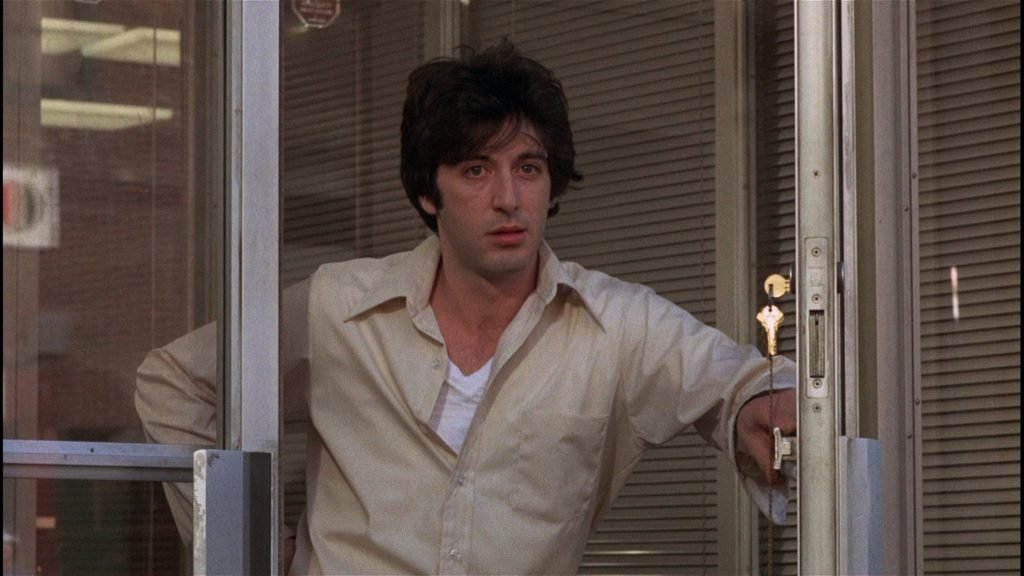 Take Al Pacino’s uncontrollable explosive style of performance and give him a character that is brash, young and angry. This movie gave Pacino the space to be himself and he blew the screen with his edgy and confused play-out. A man who tries to rob a bank to pay for his lover’s operation is not to be messed with. Sonny is not very bright and Pacino displays an elaborate mental churning of the character, trying to get out of a sticky situation. 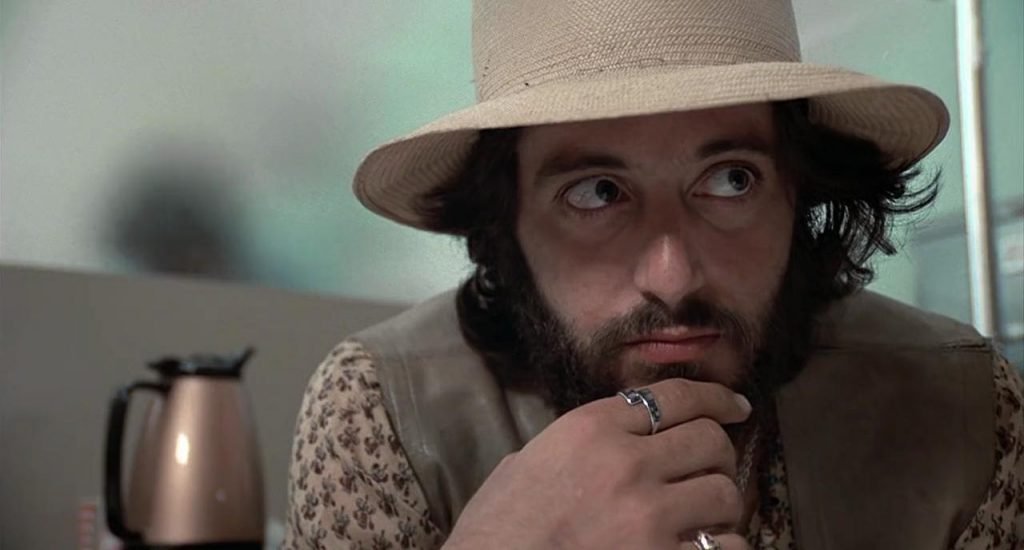 Another cop performance by Pacino. This time as a part of the NYPD. Frank Serpico launches into a righteous anguish in this movie after he learns the price he has to pay by exposing his corrupt colleagues and superiors. Once again, he plays an angry young man, whose hunger to own every scene is visible in this drama. He is like a lone wolf moving in every direction and clearing his way as he moves ahead. 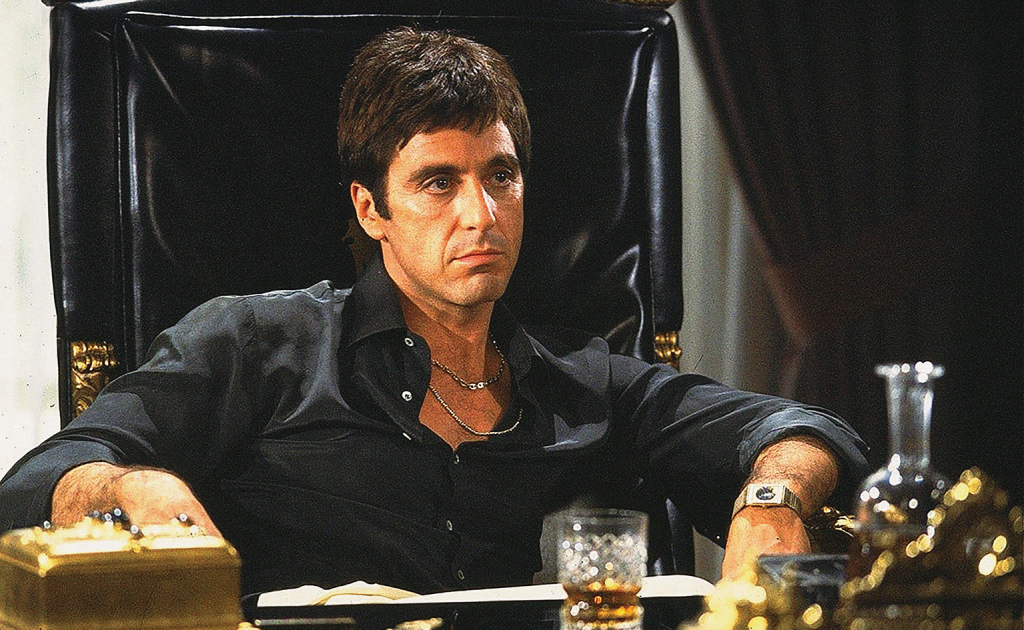 This is not a movie that is easy to digest. Which is exactly why this is a movie that is so worth the experience. Everything about the movie’s story is out of the acceptable mould. Al Pacino’s casting as a person of colour, his indelible rage, the story’s hedonistic world view and much more.

The movie is a blurry reel of collection of memes, punch lines, guide of  American Pop Culture and cool moments. There is nothing worth missing in this movie. It is a capitalistic nightmare portrayed with poetic perfection on screen, where our Al just fits thus smugly. 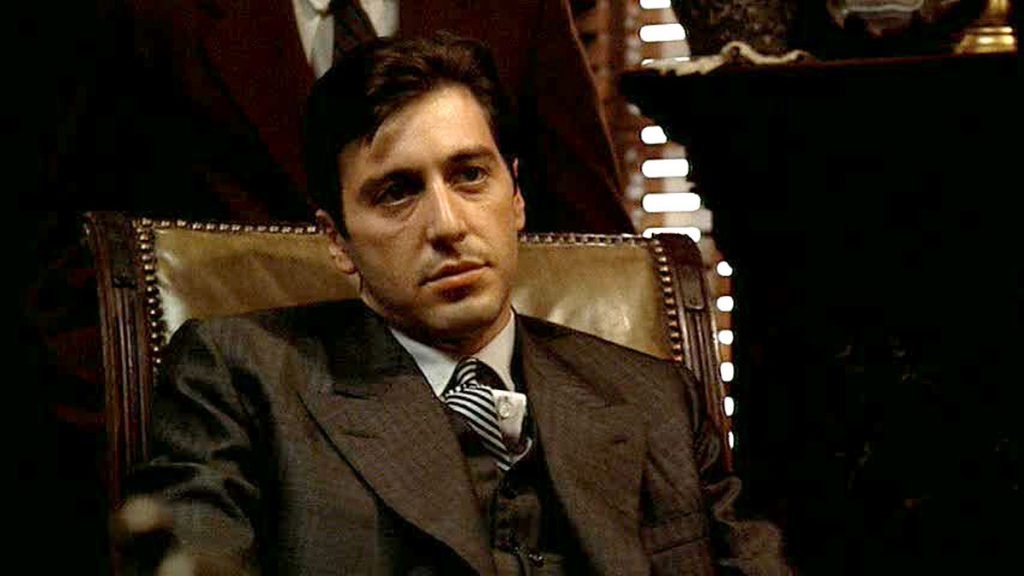 Even though Micheal Carleone is not the center of attention at the start, everyone noticed how the future Carleone family head just shines from the start in this 1972 hit. Pacino’s character is incredibly calm, poised and even toned down to the level that we almost miss the brilliance hidden behind the army man demeanor.

To say that Pacino’s casting in this movie was perfect, is an understatement. Never could have anyone else brought in the boyish charm with the sharp brain of a jackal as this man did in The Godfather. He got the critics and the audience hooked to his acting skills. It was just a matter of time when he would reel everyone in, later on. 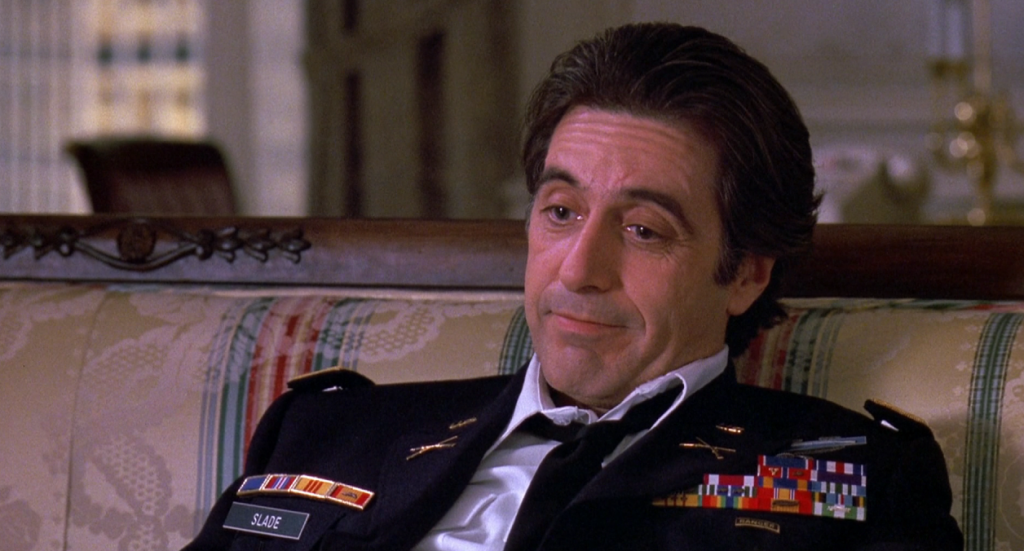 This is a personal favourite of ours any day out of all the Pacino movies. An old man gets an intern to shadow him on a hedonistic yet tasteful holiday. Now this is not something we would really find out of the way, right? Wrong. The man is a retired army man who had been blinded on field, while his mates died. So we have a grump with hurt ego, who won’t let anyone help him; supposedly needs to be nannied, but refuses to and blind in a different city with a stranger.

His smooth approach that fleets women off their feet is just charismatic. Add to this, his non apologetic confidence about driving a Ferrari at top speed only based on verbal directions by a college kid, is impeccable. This is an old fart who will do as he wishes, no matter what.

If not Pacino, I do not know who else would have had added a youthful virility to an aging army man. Only he could have pulled the irritating “Hoo-Ha!!” with such finesse. And let’s all agree crazy or not crazy chivalry is still the best colour in any man and Pacino shows us the perfect example of that. 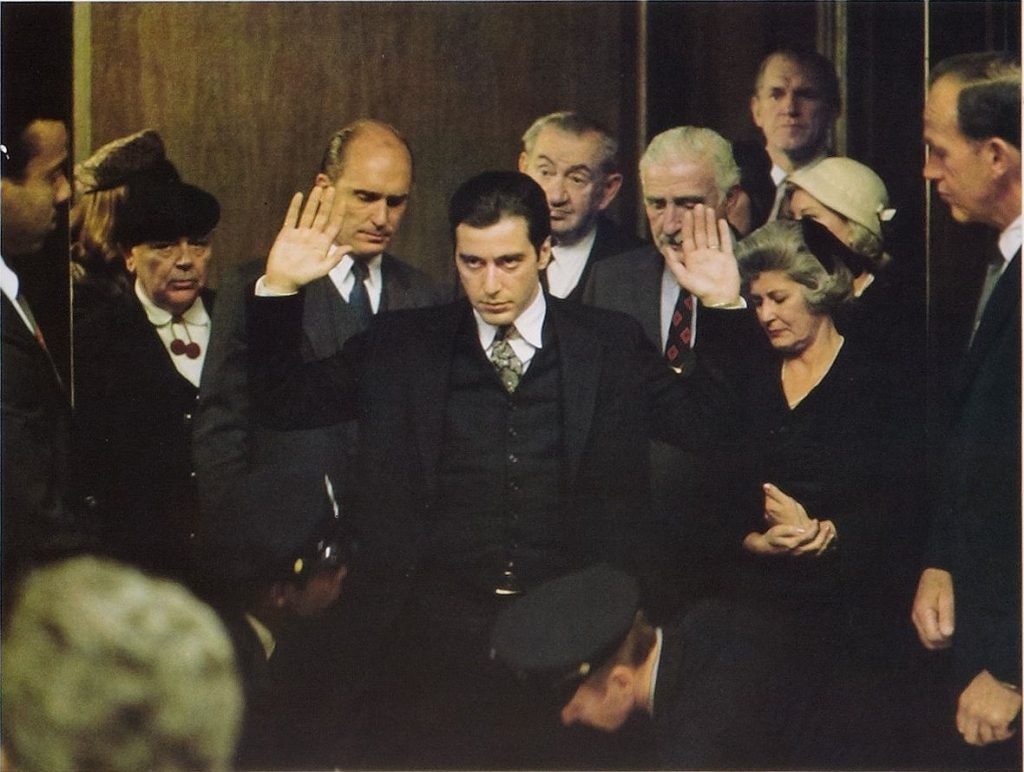 Having taken away his morals, Micheal Corleone is unleashed in this part of The Godfather series. This movie holds up and further pushes the Pacino Legacy. His performance is grand and memorable. Till this day The Godfather series is one of the best things that has happened to Pacino and in effect us (the audience), because he is in it.

We are glad we are alive in an era where we have witnessed Al Pacino’s work and we continue to bask in the glory of his performances.