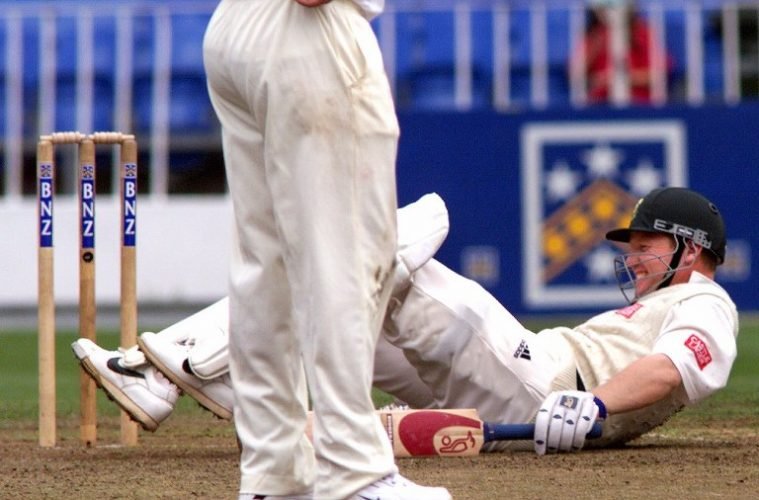 Nothing gives the bowling team more happiness than the fall of a wicket. Moreover, it’s as much disappointing for the batsman who has toiled hard to stay at the crease. Having said that, over the past few decades, we’ve seen some weird dismissals in cricket. Some batsmen being unlucky, some silly and some too unaware to realize what happened. Here we have listed ten funniest dismissals in cricket:-

During a Big Bash League encounter in 2016, Australian leggie Adam Zampa was involved in an incredible run out. Batsman Dwayne Bravo tried to go straight. However, the ball hit Peter Neville’s bat at the non striker’s end, diverted to Zampa’s face and onto the stumps. Unluckily for Peter, he was still out of the crease. After the game, he confessed that he was so concerned with Zampa getting hurt that the umpire had to remind him, ‘That’s out’.

2. Azhar Ali strolling with his batting partner midway in the crease

Azhar Ali edged the ball past gully and assumed the ball went for a boundary. Both the batsmen stopped midway in the pitch and started chatting. However the ball stopped just a couple of yards inside the ropes. Mitchell Starc quickly retrieved the ball and Tim Paine who was aware of the proceedings effected the runout. Azhar Ali stood there in disbelief before realizing what happened.

3. Amit Mishra is too lazy to ground his bat

In one of the most comical run outs ever, Amit Mishra saw himself at the receiving end of the same. On strike, he missed the ball from James Faulkner and ran a few yards ahead. Wicketkeeper Sanju Samson saw this as an opportunity and aimed it at the stumps. He totally missed it and the ball went to Faulkner who took another shot. However, that too didn’t reach the target. Just when Mishra seemed relieved, Samson was successful in the third attempt. The Sun Risers Hyderabad player was still out of his crease and had to return back.

After Pakistan were left reeling at 142/8, Misbah Ul Haq batted brilliantly to rescue Pakistan. However, a silly mistake ended up costing him his wicket. Hitting the ball at point, Misbah Ul Haq hurried for a single. Dinesh Karthik made a throw towards the non striker’s end. To avoid any contact with the throw, Misbah jumped. But alas! Only to allow the ball to hit the stumps with him in the air. This was quite reminiscent of his untimely scoop in the WT20 final which was just a couple of months ago then.

5. Luke Ronchi hits a boundary but is given out

How often does a person hit the ball out of the boundary and get out on the same ball. Luke Ronchi was a part of this expedition. The Kiwi batsman hit a sweep shot as the ball reached the boundary. However, he ended up stepping onto the stumps, causing the most abysmal hit wicket you’ll ever see.

6. Monty Panesar spins both, the ball and the batsman

Inzaman Ul Haq has surely been a part of a good number of weird dismissals. In fact, there can be a list of top 10 funniest dismissals of Inzi alone. Monty Panesar not only spun the ball but even the Pakistani batsman. Inzamam lost his balance attempting a sweep shot and fell over the wickets causing the bails to go down. Probably, the most embarrassing way to go down.

Involving the Superman of Cricket, AB De Villiers lost track of the ball after hitting it. Attempting to go towards deep square, ABD edged it behind. With no idea where the ball was, De Villiers ran midway to the crease. However, it was right there near the wicketkeeper who took no time to flash off the stumps. It’s always ABD who gets himself out anyway.

8. First save yourself, then your partner

During the runfest series in 2013 between India and Australia, George Bailey ran himself out. Hitting the ball towards deep mid wicket, Bailey attempted a double run. While he could have made it easily, the Aussie batsman was too concerned for the throw at the non strikers end. Vinay Kumar showed great presence of mind by swiftly throwing the ball at the strikers end as Bailey was short of his crease.

9. Cullinan catches himself out

The South African cricketer became only the second player in ODIs to be given out handling the ball in 1999. During a game against West Indies, Cullinan played a ball that bounced straight up. However, Cullinan ended up catching the ball and returned it the Windies player. While it all seemed fun to him, Brian Lara appealed and he had to return back to the pavilion. Quite a rare form of dismissal.

10. You do not need to aim at the stumps to get Junaid bowled

Bangladeshi batsman Junaid Siddiqui was a part of one of the most unique dismissals in cricket. Junaid tried to dodge a bouncer. Indeed the ball went into the air and landed straight on the stumps. The bowler Chris Martin couldn’t believe his luck as the other Kiwi players joined the celebration.