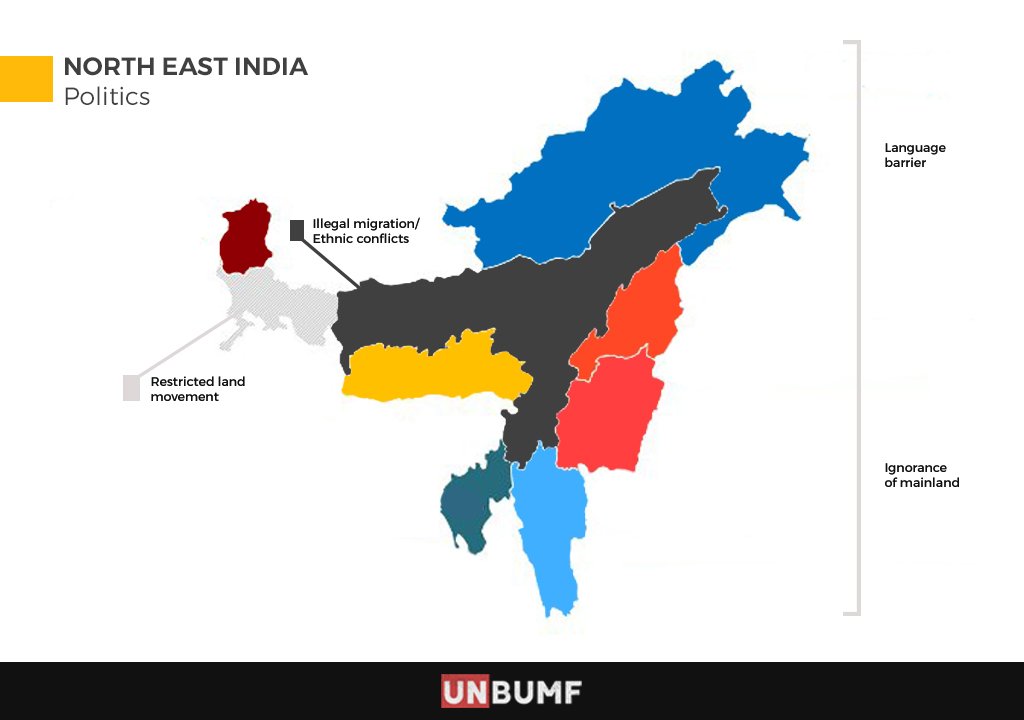 Understanding Politics Of Northeast And Why Is It So Unstable

With a total area of 232,230 square kilometers and eight (not seven) states, North East India is nearly twice as big as England. In the past 100 odd years, however, it rarely had politicians that did justice to its size and abilities. Known and famous members of the Parliament and political arena from the area include tall leaders such as P. A. Sangma, Tarun Gogoi, George Gilbert Swell, Pawan Kumar Chamling and of course Kiren Rijiju. A handful of leaders to name in a seventy year history is not the best representation of what the area can offer.

Why is it that the area has been unable to produce mass leaders whom the rest of the country can identify with? What have the contemporary leaders such as Rijiju done differently to have become a familiar face? And most of all, why is the state politics of nearly all states, barring Sikkim, so unstable?

A small thin land mass known as the ‘Chicken’s neck’, the Siliguri corridor. Due to the restricted land movement, transportation to and fro is difficult. This in turn makes exchange of labour limited to urgent needs. The near zero movement of people to and from northeast has ensured that very few people from the region come looking for work to the central parts of the country. Thus, it is very difficult for people in the larger landmass to identify with them and their culture, let alone their politics. Ignorance of the past 50-odd years has led to either side being wary of each other. It is slowly being eroded now, but is likely to take at least a decade.

External geography aside, the problem of a hard, unforgiving terrain is yet another problem. Most parts of northeast have hills, rapids and interspersed rivers, which makes commute inside the area very difficult. Thus, it makes movement of goods and people inside the area also very limited. 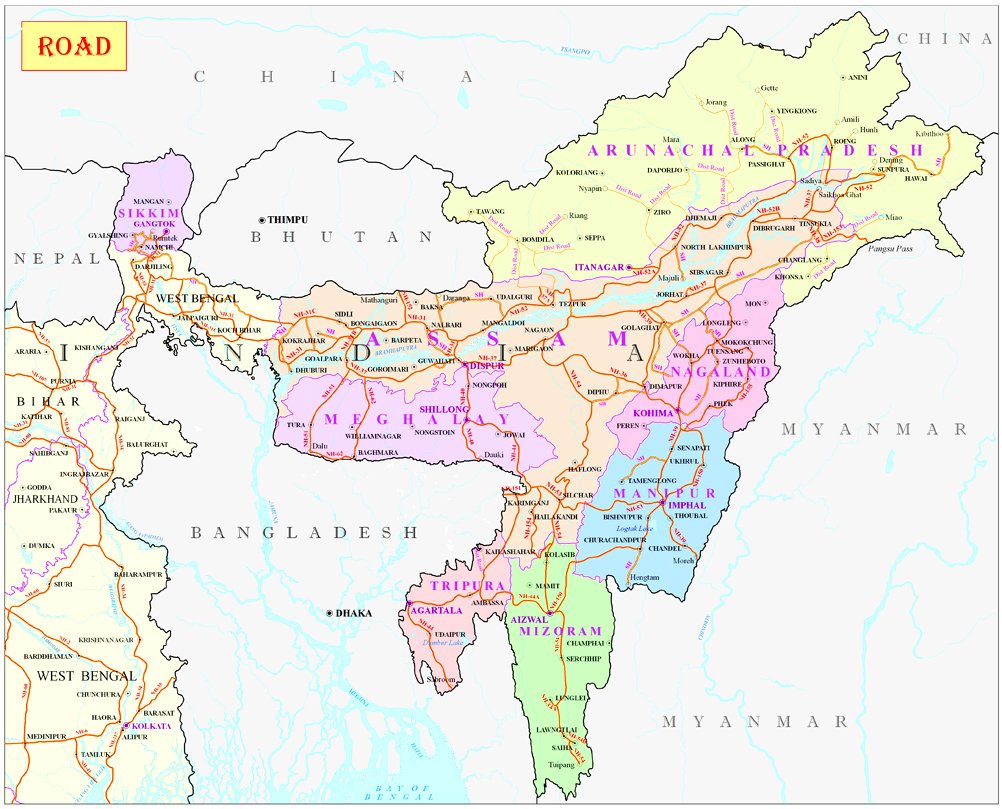 Apart from the geography, the problem of communication has also been a stumbling block. One uniting factor for the development of politics in the rest of the country is that one uniting language, that makes it easy for any political party to convey their message across to the electorate. Most national parties relay their messages in Hindi or in English. A large portion of ideas and promises is most likely to be lost in translation. The electorate thus does not get any opportunity in the shaping of the manifestos and political arguments.

Even if you manage to somehow overcome that barrier, the problem of internal communication shall persist. The northeast is basically an amalgamation of a large number of tribes, all of who have different rituals and languages. The lack of a common language even for the state, barring Assam, makes it extremely uneasy for politicians to convey their ideas and ideals at the mass level. Though this situation is improving, thanks to English taking its roots very fast across the country, it will be some time before it is without a hitch.

Because the area is a collection of tribes, conflicts are order of the day. The prime example is the Naga Conflict, which has been on for nearly 70 years now. Nearly all the tribes that reside in these hill states have been against each other for ages now. There is the National Liberation Council of Taniland, or NCLT, which has been demanding a separate Taniland for ages now. The United Liberation Front of Assam, which was active in the 1980s has since lost much of its hold. Similarly, there are many such organisation which keep demanding a separate statehood or citizenship rights from time to time.

Other than the internal conflicts, the issues that arise due to legal and illegal migration also persists. Because of the area sharing more of its land mass with neighbouring countries such as China, Myanmar, Bhutan and Bangladesh, illegal immigration is a major issue. The geography of the area is such that the borders are bound to be porous. Migration of people from countries such as Bangladesh is not helping the cause either.

d) Ignorance of the mainland

The mainland of India has played its part in pushing northeast into a further abyss of political uncertainty. The most recent example is the frequent horse-trading that has of late started in the region.

Take for example what happened in Arunachal Pradesh about an year ago. The then Chief Minister Late Kalikho Pul broke away from the Indian National Congress and formed a government with the help of rebel members of the party. The governor, installed by the centre as a political appointee gave a go-ahead to the decision without a floor test or any such examination. The result was that the appointment was quashed by the Supreme Court. A lot of drama later, Pema Khandu was finally installed as the chief minister. But all this was perhaps too much to bear for Pul, who very shortly committed suicide. 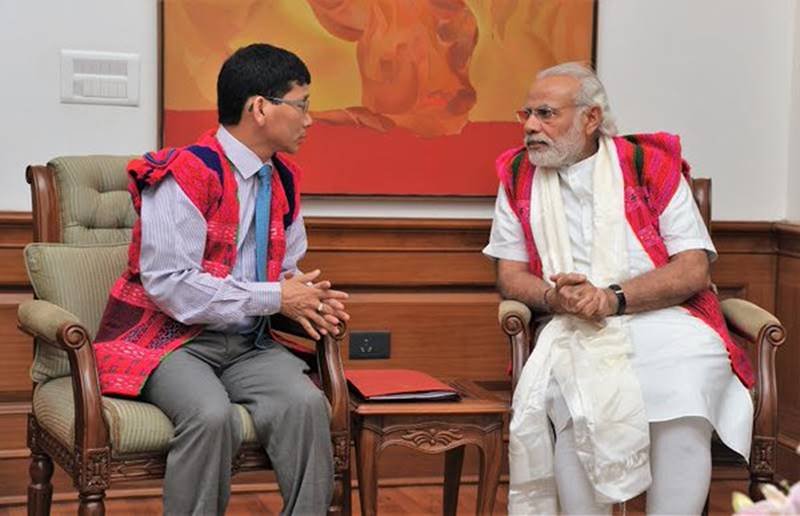 Consider for example the most recent case of Nagaland. Shurhozelie Liezietsu was the Chief Minister of Nagaland until about 10 days ago, when a chunk of his party members decided to trade sides and went with the dissenter TR Zeliang. Now Zeilang plans to approach the high court for justice. Cases and incidents like these put a stop to a well-oiled machinery and bring the states to halt.

Governors installed by the centre from outside of the region hardly understand the finer delicate situations of Northeast. Decisions taken by such political appointees is bound to cause trouble more often than to calm it. The mainland needs to recognize that and appoint people with more political capability.

One would be getting ahead of oneself if one were to believe that the worst is over. It will take Northeast a long time to be politically stable. More mature leaders, who have been educated in the central regions of India will have to return to their roots and get a grip of the situation. A lot of the youngsters who come to mainland cities like Delhi and Mumbai will need to be recognised by national parties as possible contenders for the betterment of the region. There are a few names and those names will need to be honed so that they develop their political skills more maturely.

Moreover, the idea of developing a strong nation will truly need focus of strengthening every part of it. It cannot be more than perfect in one place and fighting injustice in one. We would like to see our leaders to really think about if they are really doing what they were appointed for.