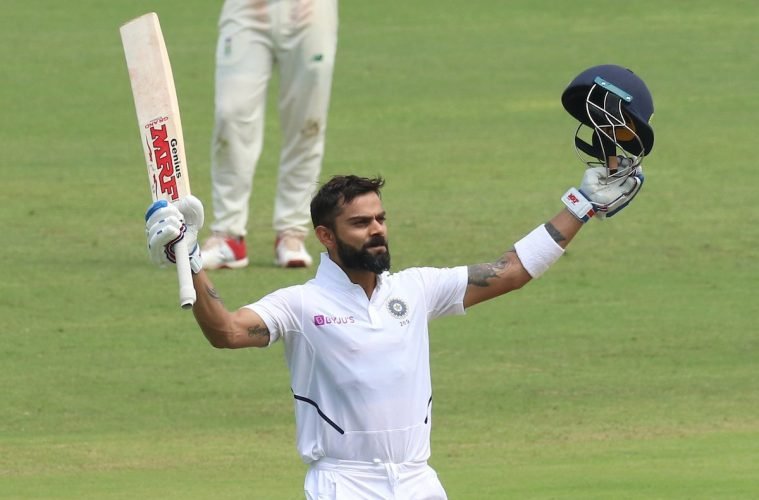 The Pune crowd witnessed pure domination from the home team as they registered a phenomenal innings victory over the Proteas to seal the series 2-0 with one match to go. It was a fabulous all-round performance again by the Indian side as they took apart South Africa in every department. They successfully managed to erase the memories of India’s loss at the same ground back in 2017. This was India’s 30th Test win under Virat Kohli, which is the sixth highest tally overall. The elite list is led by Graeme Smith (53 wins) followed by Ricky Ponting, Steve Waugh, Clive Lloyd and Allan Border.

India Dominates With The Bat

Rohit Sharma, who scored two centuries in the first Test could not mark his presence at the MCA Stadium in Pune. On the other hand, Mayank Agarwal produced another remarkable innings as he scored his second consecutive century. The 28 year old is also the leading run scorer in the series at the moment with 330 runs at an average of 110. Cheteshwar Pujara who walked out to bat at No.3 scored a splendid fifty before getting out.

However, it was Virat Kohli who turned out to be the talk of the town again. Scoring his first Test century in 2019, the Indian captain came out all guns blazing in front of the South African bowling attack. He combined with the vice captain for a 178 run partnership for the fourth wicket. Ajinkya Rahane departed for 59. It was the exact moment when Kohli decided to go bonkers with the bat. Together, him and Ravindra Jadeja stitched a 225 run partnership for the fifth wicket coming at an extraordinary pace.

Virat went on to score his seventh double hundred which is the most by any Indian batsman in Test cricket. He kept scaling heights and surpassed his highest score in the format. Jadeja from the other end created a havoc with the bat. After Tea, the pair added 128 runs from just 93 balls before India decided to declare at 601/5, after Jadeja got dismissed for 91. Virat Kohli remained unbeaten on 254* as he walked back to the pavilion, receiving a grand reception from the Pune crowd. 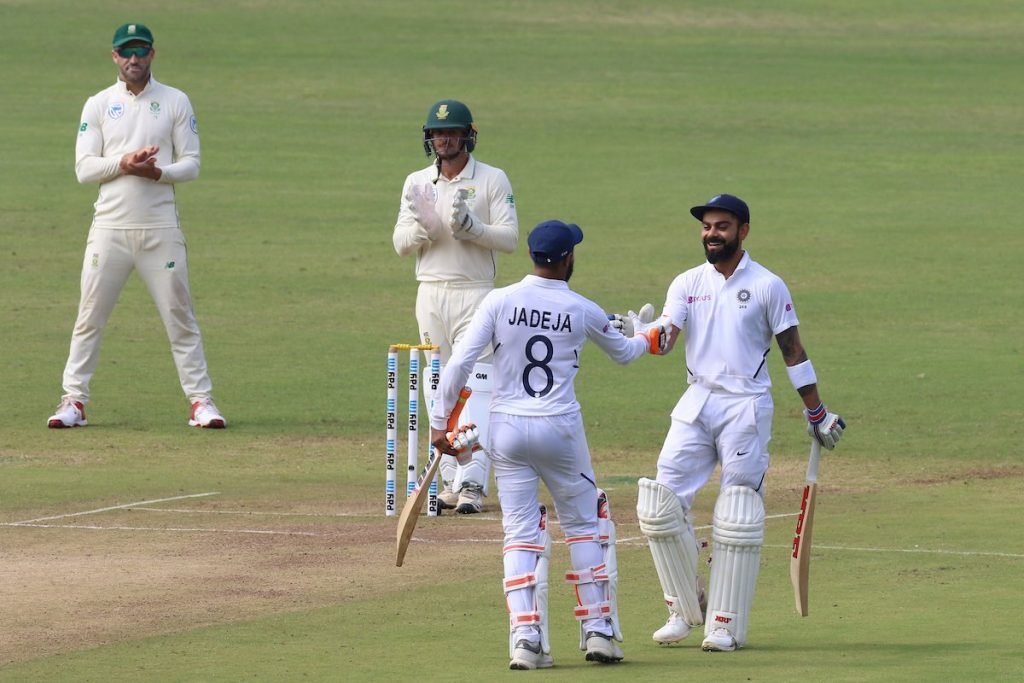 It was a torture on the visitors, of all sorts. After two days of merciless toiling in the Pune heat as the Indian batsmen put up a mammoth total, they were asked to bat and survive. The assault after tea had completely put a hault to their spirits. The Indian pacers who had been resting their feet for a couple of days were itching to get on the field and show their mettle with the ball. The Indian pace trio unleashed their fortitude against their batting opponents.

Umesh Yadav who has not been in the playing XI for a while marked his return in emphatic fashion. Striking in his very first over as he managed to trap Aiden Markram in front of the stumps, Yadav was off to a flier start. In his next over, he had Dean Elgar inside edge one onto his own stumps. Just before the day could get over, Mohammed Shami got the better of Temba Bavuma as South Africa ended the day at 39/3.

The collapse continued as the likes of Faf du Plessis, Theunis de Bruyn and Quinton de Kock failed to create a huge impact. As the skipper departed, the visitors were reduced to 162/8. While it seemed that the Proteas would fold up under 200, the duo of Keshav Maharaj and Vernon Philander refused to give in as they put up 109 runs for the ninth wicket and irritated the Indians bowlers. However, it was still not enough to help them escape a follow on as they were all out for 275 runs. 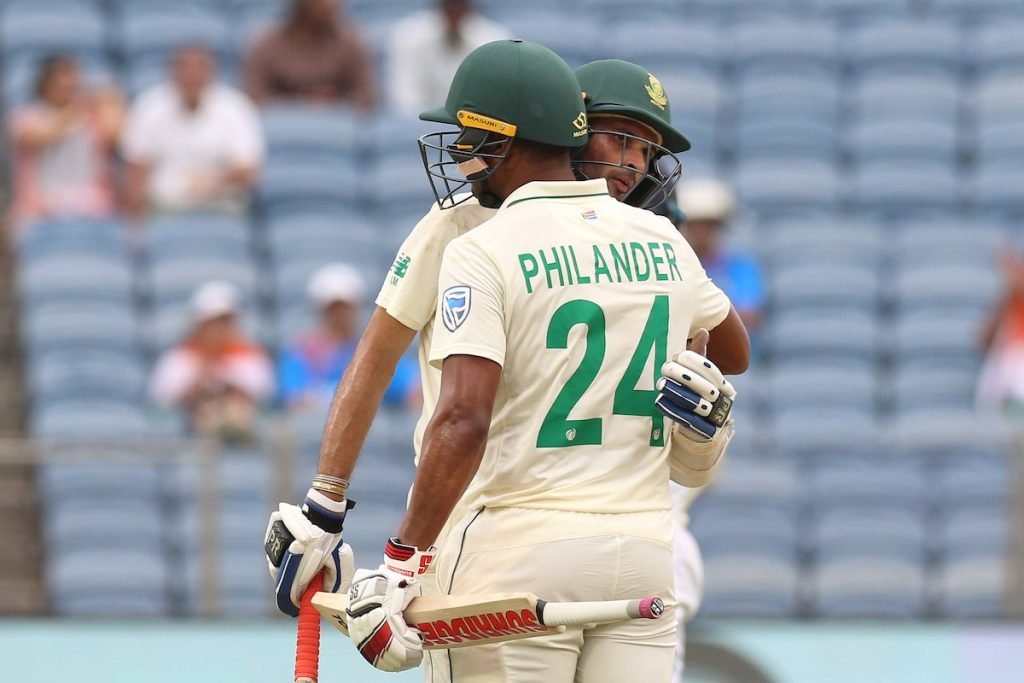 Following on, Aiden Markram again got out for a duck as he registered a pair in the Test match. Things got even worse as de Bruyn was dismissed cheaply by Yadav which saw the visitors reduced to 13/2. Skipper Faf tried to prolong his stay at the crease but failed as Ashwin got the better of him for the second time in the match. Half of the team was back to the pavilion with just 79 runs on the board. Dean Elgar got out scoring 48 while Quinton de Kock again perished trying to tackle Jadeja.

The tailenders again managed to extend the course of the South African innings. Yadav ensured the end of the same as he struck twice in an over after Tea. Jadeja pinned the final nail in the coffin as the Proteas were bundled for a total of 189, failing to cross even Virat Kohli’s score. Yadav and Jadeja stood out with three wickets each as India thumped South Africa by an innings and 137 runs. This was also their largest victory against the opposition. 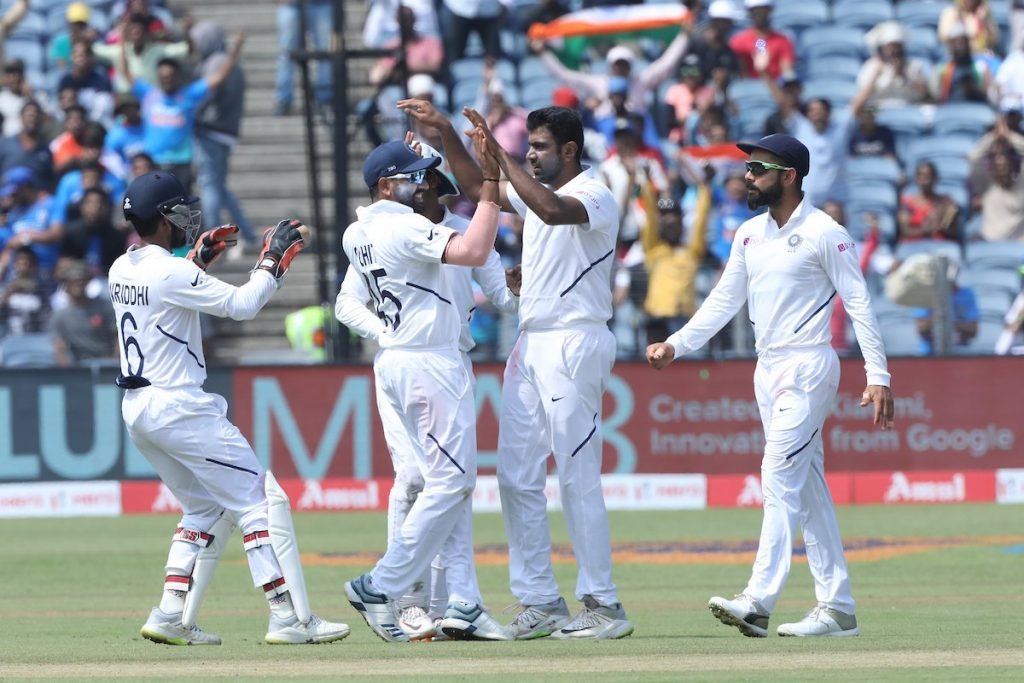 Takeaways From The Game

India will again be delighted after an amazing display in both departments. The form of Mayank Agarwal at the top is a huge positive. Virat Kohli’s magnificent innings of 254* displayed his ruthlessness with the bat. The whole batting order sans Rohit who got twin centuries at Vizag put up spectacular knocks. Umesh Yadav was splendid with the ball on his return. The spin duo of Ashwin and Jadeja also performed well. Wriddhiman Saha was also did some exceptional work behind the stumps.

On the other hand, South Africa ran out of oxygen at moments of despair which is never a great sign. While there was some sort of fight at Vizag with Elgar and de Kock responding, they failed to create any kind of pressure on India throughout the four days here. Faf du Plessis tried to hang in but couldn’t find support from the other end. They’ll literally have to perform out of their skins to create a turnaround in the final Test now that they have lost the series. India also did something similar during their last tour there and South Africa will look forward to drawing inspiration from the same.

With this win, India gained 40 more points as they continue to lead the World Test Championship Points Table with 200 points while South Africa is yet to open their account.

Read our analysis of the first match of the India Vs South Africa 2019 test series, here.