Vivo Nex: Towards A Bezel-Less Future

The Apple iPhone X inarguably popularised the “notch” design last year. Many more phone manufacturers followed suit. We went on to see phones like the OnePlus 6, Huawei P20 Pro and Lite, Vivo V9, Oppo F7 and R15, LG G7+ThinQ etc. All these are good phones, some even great value for money. But what drives some customers away from them is that “Notch”. Yes, that black bar at the top which houses the front facing camera and a couple other sensors.

So when Vivo showed off their Apex Concept Phone at MWC 2018, people were a little sceptical as it was just a working prototype. It was a concept phone but it was a vision or an idea of technologies that could come to be more affordable. Nobody thought anything would come off of it. But Vivo said “hold that thought“. They came up with a phone that they are going to go on sale with, with a lot of technologies from that Apex concept phone. Enter: Vivo NEX.

This is the closest we have come to having a truly bezel-less phone. Just looking at it for the first time is pretty striking. This is the “notchless” phone we have been waiting for since the phones with “notches” started coming out. It features a 6.6 inch 1080p Super AMOLED display with an aspect ratio of 19.3:9. It has well rounded edges and slim bezels which gives us a 91.24% screen-to-body ratio. We have finally broken the holy grail 90% number, the highest in a real phone. It’s not perfect though. The top bezel is tiny, the side bezels are almost the same as what we have seen in other phones, and then a little bit more chin at the bottom than the concept phone.

This brings us to the question, what happens to all the stuff that is normally on the front of the phone. What happens to all the sensors? What about all the stuff that goes in the notch? Where would all that go? That is where the technologies from the Apex concept phone trickle down in this phone. So first, the fingerprint sensor. We get an in-glass fingerprint sensor. There’s no other fingerprint sensor anywhere else on the phone. It’s just under the glass at the front with all the pros and cons that come with it in 2018. A little bit slower and a little bit finicky.
Next up, the front facing camera.

This one is hidden just like the Apex concept phone in the chassis which slides up and down whenever needed. You can pick from three artificial noises for the mechanism or you can just leave it silent. So that’s what happens every time you want to take a selfie or do a Facebook Live or an Instagram Live. A natural concern with this is that it is a moving part. Phones are generally built like a tank for waterproofing and durability. What happens if you drop it while the camera is open or if the app freezes or if the mechanism fails. These are some concerns which will be answered over time. 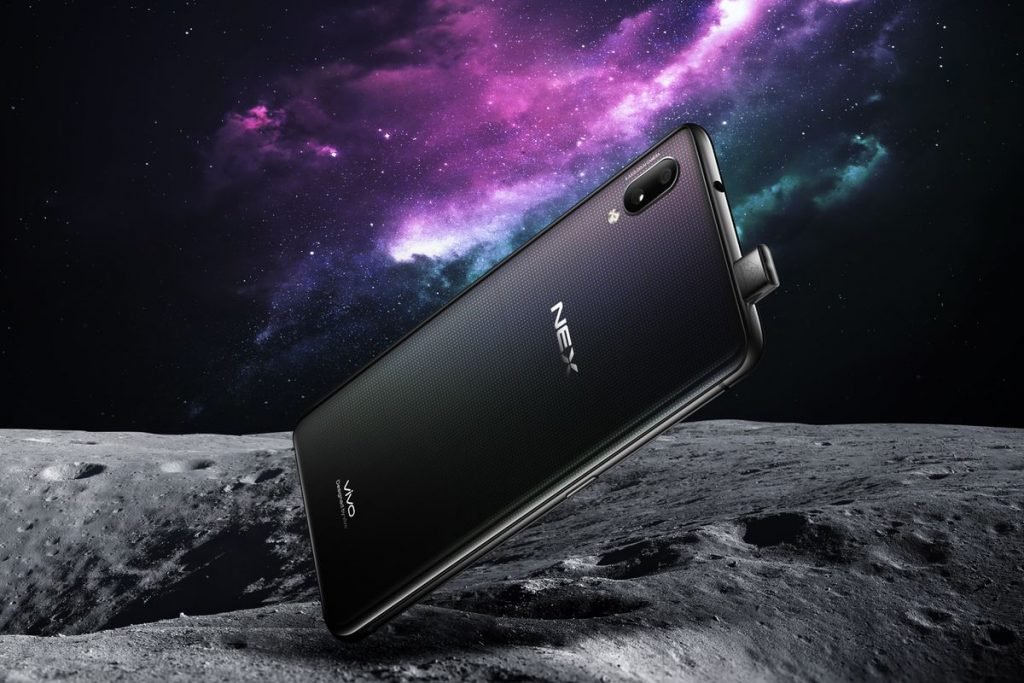 The specs are also flagship level. It features a Snapdragon 845, 8 GB of RAM, 128 GB/256 GB of on-board storage and 4000 mAH battery. It also has a pretty good pair of cameras at the back. A 12-megapixel primary camera with f/1.8 and 5-megapixel secondary camera with f/2.4 housed in a pretty shiny reflective material. It still has a headphone jack (becoming a feature nowadays) and a dual SIM tray.

So yeah pretty flagship level specs with an almost all screen display. This is the closest we have come to having a Bezel-less smartphone. The fingerprint is in-glass, a little bit slower and finicky, and a front facing camera in a mechanical chassis. We’ll have to wait and watch how it pans out when Vivo launches it in other markets.