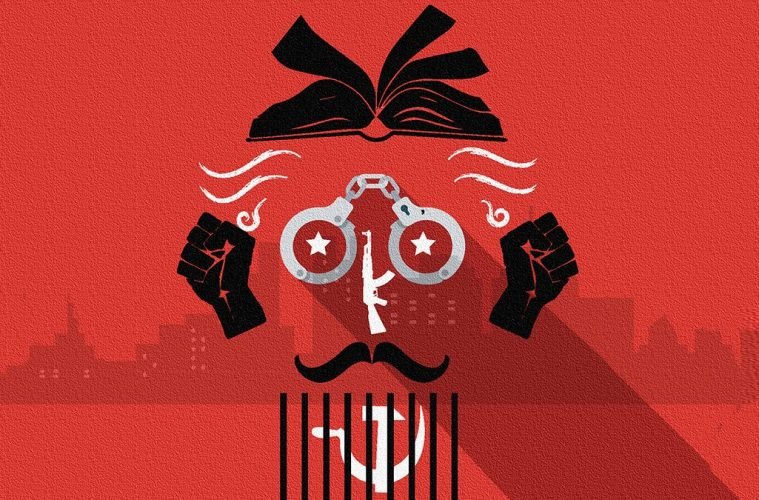 What Is Urban Naxalism And Why Is It Gaining Ground?

Tied up and shot at point blank range. Like a pack of wild dogs, they cornered their cars. The attackers were in their late 20s. This may sound like some brutal Daesh style execution in Syria. As a matter of fact, this happened yesterday near one of the biggest cities in India.

One serving and one former MLAs of the Andhra Legislative assembly were victims of murder by the so-called Gandhi’s with guns (branded so by the intellectual trash of the big cities). Giving traction to the fears that the Left wing terrorists have penetrated our urban centers. No less than in such close proximity of the headquarter of the Eastern Naval command. How did we get here? How did it become possible for these terrorists to kill with such impunity so far away from their traditional base? The jungles where they scurry away after murdering a few tribals or blowing up a bus of security personnel going home on leave.`

Left-wing extremism (LWE) has evolved quite a lot since its roots in the 60s. From being a reactionary movement of peasants and tribals in Naxalbari in Darjeeling, West Bengal in 1967, it has now evolved. It has influenced over 106 districts in nine States.  These areas being –  Chhattisgarh, Jharkhand, Bihar, Odisha, Maharashtra, West Bengal, Tamil Nadu, Karnataka and Kerala. It is now down to 80 districts as per the latest brief on left wing extremism by the Ministry of Home Affairs. Yet it remains a potent threat to the integrity of the nation.

The movement took a dangerous turn in 2004 when all the LWE groups and the guerrilla groups came together to create the Communist Party of India(Maoist). While the CPI(Maoist) became the political umbrella organisation for the movement; the People’s Guerrilla Army waged the insurgency against the Indian state. The conflict was very bloody for the security forces till 2009.

The outfit lost major leaders from November 2009. This was mainly due to ‘Operation green hunt’ (OGH) in the worst affected regions of the country. In the 10 years of the CPI-Maoist formation, 2,332 Maoist insurgents, including members of the politburo and central committee (CC) were killed.

While between 2005 to 2009 only three CC members were killed (other than state and district committee members), more top leaders were targeted in post 2009 period under OGH. Later on, many of the top leaders either surrendered or got arrested by the security agencies. Similarly, the State lost around 1821 security personnel and 4554 civilians since 2005 due to the Tactical Counter Offensive Campaign (TCOC) of Maoists. The TCOC was declared in regular intervals between 2007 and 2009.

Most critically in the post-merger period, the outfit also adopted some new tactics like strengthening its movement in big cities (Mumbai, Kolkata, Chennai, Bangalore, Hyderabad). They have been extending support to minority issues, demand for new states and displacement issues, thereby enlarging the popular support that they appealed to.

Preparing For A Comeback

The CPI-Maoist and other LWE outfits carried out ‘structural changes’ in their movement. It was done by creating the support structures in big cities and urban areas in a tactical attempt to adapt to the changed socio-economic and security scenario. The Maoists have set up base in cities to act as a supply-line. Also to build public support structure to their organization.

Union Home Ministry expressed concern at the spurt in ‘over ground mass organizations’ of Naxalites in urban areas. The move to urban areas, the Ministry observed, is aimed at supplementing the rural base in several significant ways. On December, 2006, the then Union Home Minister Shivraj Patil in Lok Sabha, said “Like forests provide safe hideouts to Naxalites in tribal areas, the cities also provide them cover. Taking advantage of this, they plan to target major installations in cities.”

The Maoists in a document called “Urban Perspective Document” mentioned about their tactics in the urban areas by drawing up guidelines. They have also talked about the revival of a mobilization effort targeting students and the urban unemployed to upgrade the movement towards the New Democratic Revolution (NDR). Other objectives of this plan perhaps to generate funding and identification of safe shelter for the leaders. In this regard, they initially had identified two principal ‘industrial belts’ – Bhilai-Ranchi-Dhanbad-Calcutta and Mumbai-Pune-Surat-Ahmedabad – as targets for urban mobilization.

Over the last 44 years, the Maoists have been giving an impression that they are fighting for justice, tribal welfare and good governance. They benefit from the view of some political leaders, intellectuals and civil society members that Maoism in India is due to socio-economic problems. Also, that it needs to be addressed with the development approach. However, the reason for Maoist presence in urban areas is very much linked to the CPI-Maoist’s objective of “capture political power”.

Article 4 of the CPI-Maoist constitution states, “The immediate aim of the party is to accomplish the New Democratic Revolution …”. Further, the party document on Strategy and Tactics notes that “the central task of the Indian revolution is the seizure of political power”. There is no mention anywhere in the Maoist literature that the movement will end once social and economic infrastructure is strengthened in remote areas.

Since the Maoists’ ultimate goal is to capture political power by encircling cities with a strategy of protracted people’s war (PPW), urban areas figure prominently in their revolutionary agenda. Towards “urban uprising”, which figures in the Maoists’ strategic offensive phase, they wish to concentrate on building an organization of the working class.

Increasing The Base Across Country

CPI-Maoist decided to intensify the people’s war by increasing its mass base across the country and strengthening its presence in urban areas. The decision, taken at a leadership conclave held in the forests along the Jharkhand-Orissa border sometime in January–February 2007, was unanimous.

The conclave resolved to expand the armed struggle from “guerrilla war” to “urban and mobile warfare”, focusing on industrial areas. It also created a five-member Urban Sub-Committee (USCO) with Kobad Ghandy as its head and tasked it to prepare the urban plan. This plan is guided by the Peru Communist Party’s (PCP) model on warfare in cities.

The Maoist document on “Urban Perspective” also notes that in cities and industrial townships forces of counter-revolution such as the police, army and other state organs are almost invincible. In such circumstances, to promote the Maoist agenda, the participation of the urban masses would be a sine qua non. 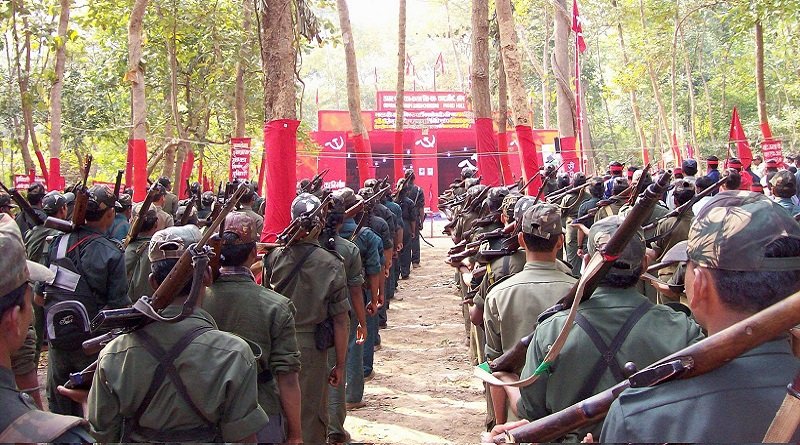 Andhra police sources indicated that Naxalites want to make a “big impression” by carrying out a strike in Delhi or the National Capital Region. Maoists’ urban plan synchronizes very much with some of their recent activities in cities.

Some Maoist supporters who have been active in urban areas and have come under the police radar are:

* Murali alias Ashok Satya Reddy, a top Maoist leader, and three other cadres, arrested on 9 May 2007 in Nagpur;

* Sagar alias Shrinivas Venkatachalia, arrested in Ahmedabad in May 2010;

* Arvind Joshi, an alleged accomplice of Kobad Ghandy, arrested on 21 February 2010 with seven others at Kanpur;

* Subhashree Panda alias Mili, who was allegedly in charge of fundraising and printing of Maoist literature, arrested on 15 January 2010 in Bhubaneswar.

The police has also identified another Delhi University faculty, G.N. Saibaba, and members of rights organizations such as Darshan Pal of the People’s Democratic Front of India, Rona Wilson, secretary of the Committee for the Release of Political Prisoners, and Gautam Navlakha of the People’s Union for Democratic Rights as sympathisers. 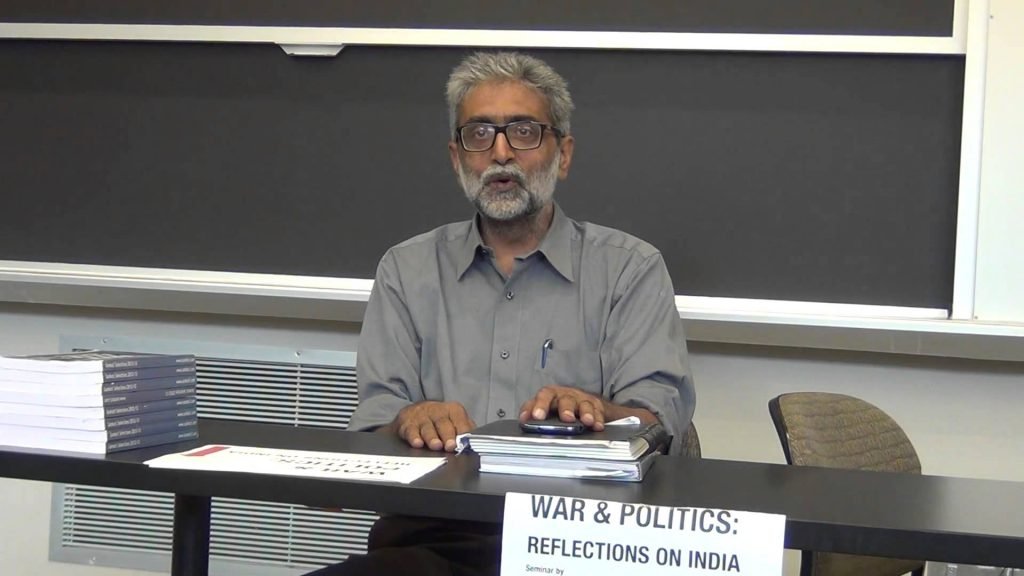 Most recently, in August 2018, Pune police carried out multi-city raids. Thus, in a crackdown on alleged Maoists sympathisers, raids have resulted in arrest of at least nine activists, who are said to have links with Maoists. Following the raids, the police arrested at least five people – Varavara Rao, Arun Ferreira, Vernon Gonsalves, Gautam Navlakha and Sudha Bharadwaj – in connection with a probe based on the investigation into the Bhima Koregaon violence.

The Pune Police’s investigation into the Bhima Koregaon violence, which erupted in January this year when Dalits clashed with upper-class Marathas, subsequently led to evidence revealing an alleged plot to assassinate Prime Minister Narendra Modi.

Some recent Maoist attacks have been closer to cities, including one on an Eastern Frontier Rifles (EFR) security camp at Silda in West Medinipur district of West Bengal on 15 February 2010. Maoists carried out a similar attack on 15 February 2008 in Nayagarh, just 88 kilometres from the state capital. Earlier, Maoists had attacked the district headquarters and jails in Orissa and Bihar.

On 24 March 2006, over 500 Maoists attacked the Orissa State Armed Police camp at R Udayagiri town in Gajapati district, looted arms, and managed to free 40 prisoners. In November 2005, over 300 armed Maoists raided the district jail in Jehanabad town and freed their comrades. Earlier, on 12 February 2004, over 500 Maoists simultaneously attacked the Koraput district headquarters and armoury. These attacks indicate that the Maoists are moving closer to cities and that semi-urban areas are vulnerable to their attacks. Police stations located close to highways and situated in semi-urban areas are their immediate targets.

Urban areas would, however, pose serious challenges to the Maoist designs. The challenges stem from absence of strong social and political issues, support base, heavy presence of security forces and lack of terrain support to hide after major attacks. In urban areas the Maoists would be more dependent on their front organizations than on PLGA. It is likely that in the given circumstances they would in the short term focus mainly on organization building, fundraising and identification of organizations for a united front in the urban areas.

The presence of Maoist sympathisers in the cities is an ever present concern. But its logically very difficult for the Maoists to pose any real threat to the cities. However, a danger still prevails and thus, steps for prevention are in action.