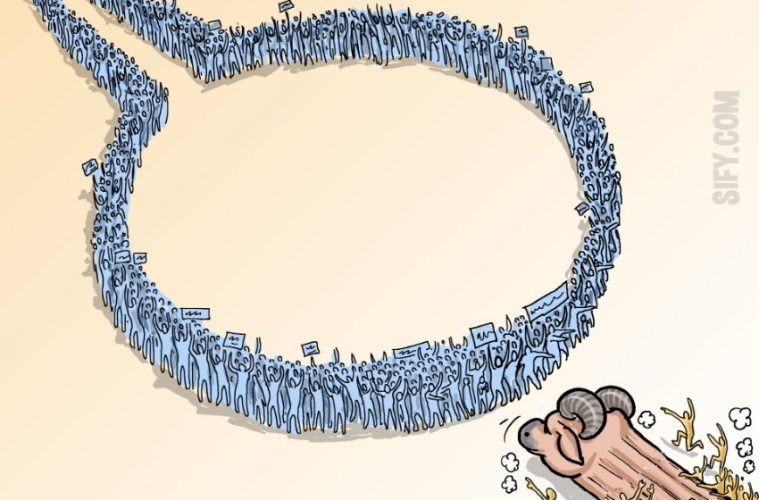 Will Hindi Reappear In South?: Everything About #StopHindiImposition

Language has always been a unique identifier in India. The concept of a mother tongue is very unique to that of Indian Subcontinent. This seems plausible considering the sheer number of languages that exist in India. Any kind of imposition on the part of the state to change this status quo at a local level is always meets with fierce resistance. Over the years, this has become even more pronounced. The regional parties are using it as a weapon for narrow political motives. As another new day dawns upon India, it seems we have come a full circle, all over. A single party establishing its hegemony all over India and the people down South raising the banner of resistance over language. Let us try to understand what the deal with the hashtag version of Anti-Hindi protests is.

The entire movement can be practically traced to the 1937 movement against  C. Rajgopalachari’s efforts to introduce Hindi in schools in the Madras Presidency. This feeling of isolation and fear growing more during the extremely divisive issue of languages during the framing of the constitution. In a very bad—tempered debate; where the Hindi belt leaders were not even ready to accept meagre concessions such as Roman numerals for official purposes; Hindi and English were proclaimed as the official languages. English was not to be in use after 15 years in 1965. The protests, led by DMK, were extremely violent. It seems that to some extent, the issue was blown out of proportion by political outfits. Their very existence was based on this Anti-Hindi movement. The perception about Hindi imposition is a representation of regional insecurity and forces benefitting from this discord take its undue advantage.

Nehru signed the Official Languages Act in 1963. This proclaimed that there is no official language of India. Instead the 8th Schedule of the constitution of India exists which lists out 22 recognised languages in India which covers most of the major linguistic groups in the country. Over and above that, Part 17 of the Constitution lists out preservation of languages as a minority right; where a language, spoken by few people, fading away fast and of immense cultural importance can be protected with variety of special measures. Furthermore, Article 29 fortifies all these rights as a fundamental right.

Hence, the South Indians are largely alone in terms of linguistic integration, merely connecting to Indians via English. This has seen a lot of young South Indians restricted to their home states. Here a lack of opportunity in terms of employment has resulted in them being cut-off from the mainstream.

The Draft National Education Policy, 2019 has created a political maelstrom in the peninsular India. Every party worth its salt in terms of narrow and opportunistic populism has joined the bandwagon. This mostly on the introduction of Three Language Formula. This entails that along with English and the regional language, Hindi will be available as an optional language. Which, the students can take up Class 6th onwards. Hence, the regional parties’ fat cow that is usually up for milking to make them parties was suddenly back. Even after repeated assurances, including by the Kasturirangan Commision, who authored the report, that these are only suggestion. And these will not get any implementation.

With the thumping mandate handed to YSR Congress, DMK and other regional parties seems to reflect widespread support to this attitude. This resistance reflects an extremely atavistic and myopic thinking. Overtime, the actions of National parties that based their demographic strength from the North played its role. This further became a tool for manipulation for these regional parties into some sort of massive attack on their language, culture and identity. The trusting and the incredibly brilliant people of South India end up between rock and a hard place. They practically run everything that has science and technology in our country.

Why Is This A Huge Deal?

One has to understand what language means to an average Southerner. Unlike us North Indians whose languages have evolved from A to B to R in a millenniums time, the southern classical languages have remained unchanged. They have sacred texts in their own languages. Tamil, Telugu and Kannada each have their own Ramayana. Tamil in fact, is the flower of classical literature. It is the apex of human civilisation with its incredibly complex and beautiful Sangam literature. This was composed during the three Sangam conferences thousands of years ago. Yet Tamil is in a Brahmi based script and so is Telegu, Kannada and Malayalam. Clearly, the ancients could see the wisdom and practicality in taking up a script in order for Tamil to spread far and wide. Then why should the politics of language hijack the great project that is our India?