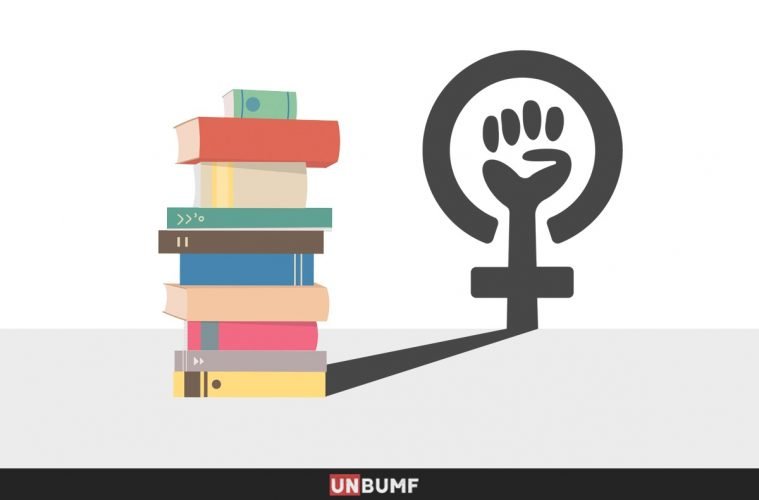 Your Handy Guide To Feminist Literature Across Genres And Generations

Feminist literature is at your service. There is an extremely important reason why it is needed, too. For a concept that demands equality, feminism is a victim of a lot of misconception and misinterpretations. As decent human beings, we need to unlearn a bunch of inherently flawed concepts about gender that have been ingrained in us. Here’s an example: we all need to undo the conditioned ideal of gender as a binary. Because it is not. Gender is a spectrum and it is high time we all embraced the symbolic rainbow. Like this little example, there are a lot of lessons to be learned about intersectional feminism. As a bonus, I will also hope that reading can talk sense into those who refuse to be called feminist, whilst enjoying the fruits of the movement.

Here’s a handy list of books you can devour, across genres, to understand the concept and dispel the myths that surround it:

1. A Room of One’s Own by Virginia Woolf

This book is a classic, yes. But Woolf has been so clever in her message,“Earn money, have your own room and create spare time. And write, without thinking what the men say!” The book is a perfect food for thought and is not limited to the conversation on gender. It raises many contentious issues. For instance, the idea that poetic excellence can be germinated under sufficient resources, which was why the wealthy people had their dibs on it. back when the book was penned, Woolf could not get an Oxbridge education. It only goes to show that such accounts are important to be read today, to understand the position of privilege that patriarchy gifted the men.

2. The Color Purple by Alice Walker

Let me give out trigger warnings before you go ahead reading the book. The story is one of the most difficult, heart-breaking tales I’ve ever read. And to see someone paying the price for just existing is apathy at its peak. Celie has been raped by her father is pregnant for the second time. It is a plight, an existence she did nothing to deserve.

But women can be each other’s support systems, and that is the kind of togetherness we ought to strive for.

3. The Bell Jar by Sylvia Plath

The imagery of the fig is an important takeaway from this semi-autobiographical book. The plot focusses more on the mental health recovery and breakdown of the protagonist Esther. Yet, as a reader, it is easy for us to see how women’s life has changed since.

4. The Vagina Monologues by Eve Ensler

It is easier to catch this along with the play: it is still performed across the world 20 years since the first time. While there’s a certain 90s charm to the setting, it is one of the most powerful pieces to have been both written and performed with feminist roots.

5. I Know Why the Caged Bird Sings by Maya Angelou

We are all in agreement that Angelou’s poetry is a powerful force to reckon with.

Other works of the author I’d recommend are: And Still I Rise, On the Pulse of Morning, Gather Together in My Name, The Heart of a Woman.

II. For a Queer Understanding:

No Outlaws in the Gender Galaxy by Chayanika Shah, Raj Merchant, and Smriti Nevatia is the go-to book for unlearning all the concepts gender binaries you were wrongfully taught as a kid. I personally love when privilege is discussed in such settings. At the core of it, we are indeed looking at how the idea of ‘normal’ dictates how easy or hard life can be for a person. If you identify as ‘normal’ it is easy. If not, it is hard. The idea yells privilege yet we need reminders to see how subtle such privilege can be. This book is a good reminder and will make you question what you really know about gender.

As a next step, I hope you’re looking for opportunities to unlearn all misconceptions. For redeeming yourself in the practical sense of the word, I have another recommendation. A Quick & Easy Guide to They/Them Pronouns by Archie Bongiovanni and Tristan Jimerson is your handbook to be the change you wish to see in the world.

III. The Women in Fiction:

The Spy by Paulo Coelho, The Handmaid’s Tale by Margaret Atwood and The Power by Naomi Alderman are each unique in their time and cultural setting. The former is the tale of a woman who rebelled, or should I say, did what the men have always been doing? A similar fictional setting is seen in Alderman’s The Power, where women are the dominant gender because they possess some powers. How about that? I’m pretty sure the premise does not intend to scare the oppressors away. But if fear the emotion they feel, then they should realize the atrocity they’ve subjected women too.

I have quite a few recommendations in this category. The range is across humor, memoirs, personal essays and whatnot. They might not be the perfect book individually, but the tangents each of them explore is a critical part of understanding feminism (and its need thereof). Here goes: How to be a Woman by Caitlin Moran, Not That Kind of Girl by Lena Dunham, Bossypants by Tina Fey, Seeing Like a Feminist by Nivedita Menon, #GirlBoss by Sophia Amoruso, Men Explains Things To Me by Rebecca Solnit.

The next few are especially interesting. They are acutely specific about the contribution they make to the discussion. Each is a unique voice:

Why I am No Longer Talking to White People About Race by Reni Eddo-Lodge brings race into the equation. Because really, your feminism is not true and fair if it isn’t intersectional!

Lean In by Sheryl Sandberg is an empowerment handbook because women have been. As a young girl walking right into the professional world, I always think of this book as a resource. Choosing to break the glass ceiling AND wearing glass slippers is the goal. Because women can have the best of both worlds. Men also have a role to play as feminist allies, the book bares it all.

If you haven’t checked out Bates’ website and project on Everyday sexism yet, you should. The thing with sexism as an issue is, it exists in the routine. Sure, sometimes it is so evident I can point it out for you, but more often than not the presentation is subtle and ambiguous. So it is hard to call out the sexism. In this unique project (and book) Bates has compiled so many anecdotes so many of us can relate to.

VI. All Works by these Authors

The Second Sex by Simone de Beauvoir inspired the activists of the Women’s Liberation Movement and is still regarded as one of the key critical readings on the theme. It isn’t without controversy though- apparently, Beauvoir did not identify as a feminist at first. Later on, however, she was pretty vocal about her dismay at the ideas of femininity,

“Just as I do not believe that women are inferior to men by nature, nor do I believe that they are their natural superiors either.”
– Simone de Beauvoir, in 1976

Audre Lorde was another champion of the cause. People even call her the mother of intersectional feminism so you can consider this a great testimonial for her inclusion in this list. She tore through issues of class, race, age, gender, and health as they relate to the female experience. Her books, especially recommended for this list include: Zami: A New Spelling of My Name, Sister Outsider and the recent Penguin mini called The Master’s Tools Will Never Dismantle the Master’s House

All works by Chimamanda Ngozi Adichie: Honestly, before you start brushing up on any feminist reading at all, I highly recommend going back to the basics. Start with We Should All Be Feminists by Adichie. The arguments and logic are simple. Even if you end up not reading the rest of the books, this will be enough for times when you need to deal with people who look down upon feminism and allied labels.

Roxane Gay: Books by this Omaha-based writer include Bad Feminist, Hunger, Difficult Women. She is a feminist delight on Twitter and exposes all the hypocrisies the society is marred with.

If you are up for some empowering poetry, Amanda Lovelace has penned  The Princess Saves Herself In This One and The Witch Doesn’t Burn In This One, both of which are extremely feminist to the core. And as much as Rupi Kaur’s poetry receives a scathing incision, it is empowering in its own right. Owning your bodies and securing your rights is a constant theme!

Another recommendation comes in the form of a short story by Charlotte Perkins Gilman called The Yellow Wallpaper. First published in January 1892 in The New England Magazine, this story is a typical concoction of unreliable narration and layers of themes including the division of labor and insanity. Watch out for the extremely goosebump-y end.

It is also a good idea to inculcate equality as a basic instinct in the little ones while they’re still kids (and hence, impressionable), so one last recommendation:  Good Night Stories for Rebel Girls by Elena Favilli and Francesca Cavallo. The sequel to the book is also out now, by the same name, and both of these are picture books with profiles of women who have led inspiring lives. The best part is the variety across ages and professions- the perfect world to get your little ones into! They deserve to know that possibilities are endless. That there’s nothing they cannot do if they put their mind to it.